Sometimes it pays to look at the sky! Matt Drews, who is an M.S. student in the Atmospheric Science Graduate Program happened to look up at the night sky at the right moment on November 20th over Somerville, New Jersey. The interplay cirrus ice clouds and a bright moon produced a wonderful halo display that lasted just long enough for Matt to capture a couple of shots before it disappeared. This one of many rare and wonderful halo photos that Matt has photographed over the past few years and several have been featured on the site www.atoptics.co.uk, which displays rare atmospheric optical phenomena, as the photo of the day. Matt’s latest photo is currently being considered for this distinction.

The display features a paraselnic circle, which is the white band circling the sky and always at the same height above the horizon as the moon, along with several other components of the halo complex. The paraselenic circle is formed by the combined reflection of millions of ice crystals with their vertical faces each mirroring the sun around the sky form the circle. The photo annotations are complements of Les Crowley, who runs the www.atoptics.co.uk site. 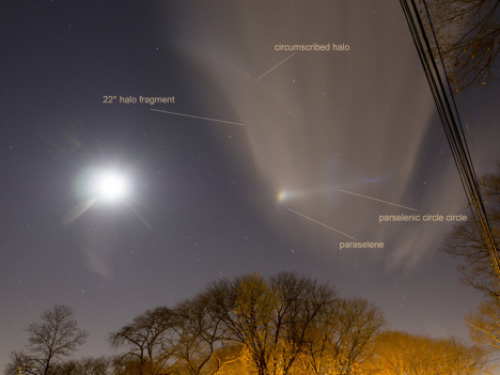