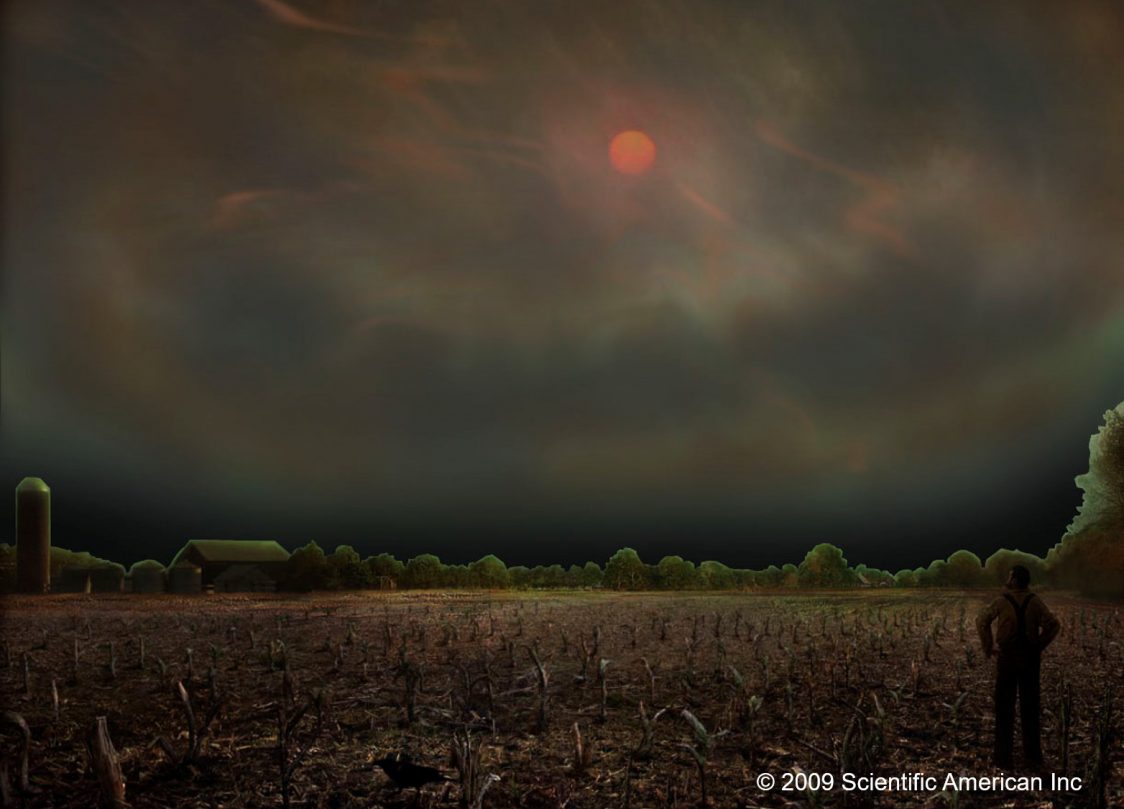 Thirty-six years ago, EOAS member Dr. Alan Robock, now a distinguished professor of environmental science at Rutgers University-New Brunswick, attended an American Geophysical Union (AGU) Fall Meeting, where a paper on the climatic effects of nuclear war was to be presented.  The talk was cancelled because NASA forbid the authors to use the term “nuclear war,” so in their later paper they introduced the term “nuclear winter,” hypothesizing that the fires produced by detonating nuclear weapons over multiple cities would produce enough smoke and soot to block out the sun. Temperatures would plummet around the world.

Exposure to that idea launched a new direction in Robock’s career that has continued through the decades. Now, Robock is the principal investigator of a 3-year, $2.98-million grant, awarded by the Open Philanthropy Project last March, to bring advances in modeling and computing power to bear on the study of the environmental and human impacts of nuclear war.

Robock’s team is focusing on six key areas in this project.

First, they are developing a suite of plausible scenarios of nuclear war, considering the nations involved, and the number and size of bombs used, as well as their targets and the duration of use.

Second, they are analyzing the behavior of city-wide fires following a nuclear detonation. Robock is interested in understanding how fires might combine in large megacities and how much soot such urban conflagrations would produce. This analysis will build off work on urban meteorology and forest fires – as, thankfully, no modern city has burned to the ground in the post-World War II era.

Third, they are modeling the movement and chemistry of soot in the stratosphere to determine the effect on particle lifecycle, radiation, and climate change. Prevailing winds and the time of year may affect a nuclear conflict’s impact. 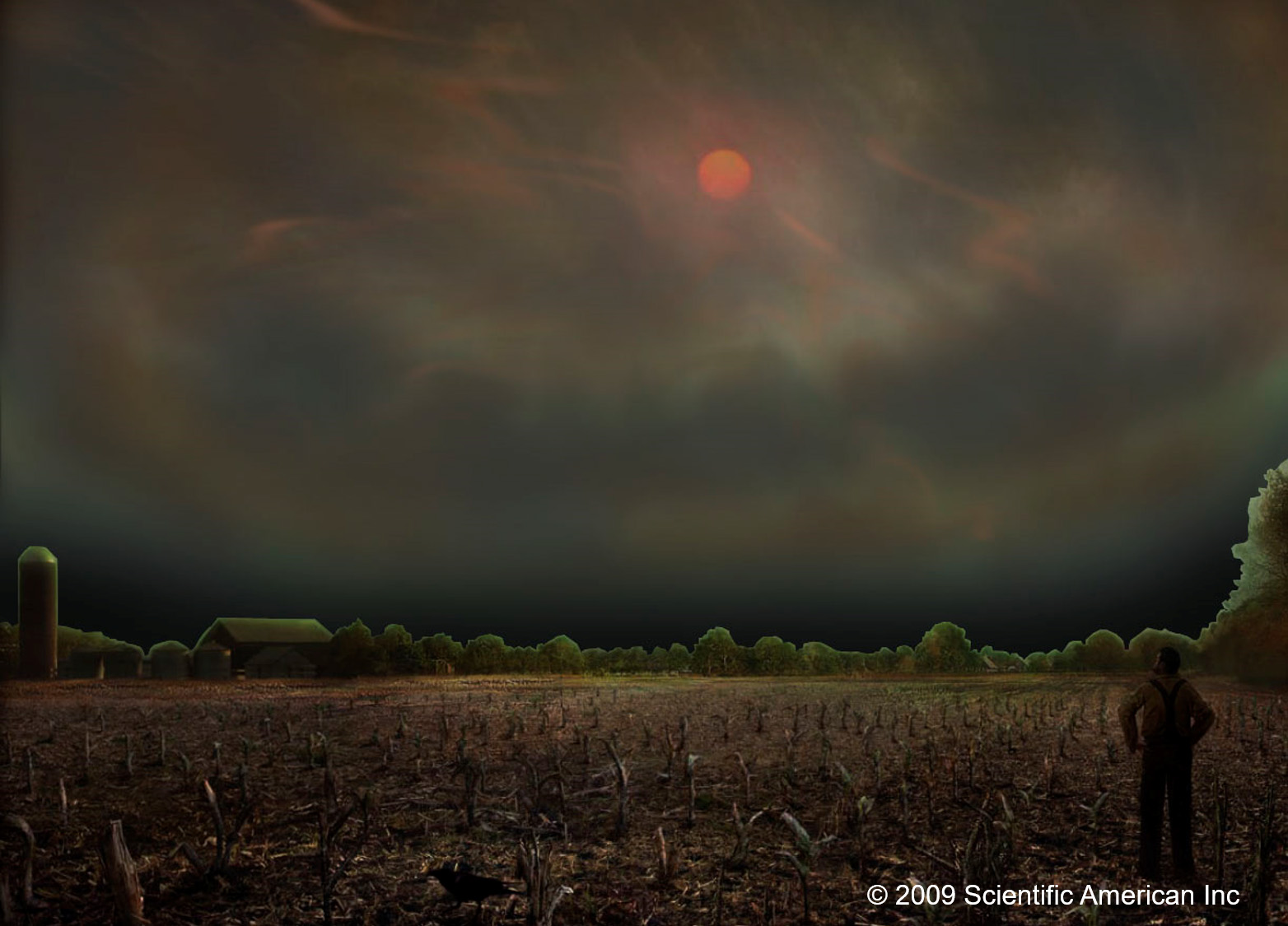 Fourth, they are calculating the global climate response to the range of scenarios. Robock and his team are projecting the resulting changes in temperature, precipitation, sunlight and ultraviolet radiation at the Earth’s surface.

Fifth, they are translating these climate effects to impacts on agricultural production, water resources and the ocean food chain. Finally, they are assessing the consequences of these impacts for the availability of food and water in each nation. They are considering economic consequences, as well as the possibility of famine, Robock said.

“It turns out the use of nuclear weapons by the US on Russia or vice versa would be suicidal,” Robock said. “If one country launched a first strike against the other, and even if they did nothing, the smoke from those fires would halt global agriculture and everyone would die from starvation.”

Nuclear winter is caused by soot in the upper atmosphere, Robock said. Dark soot particles get lifted by heat from the Sun to the stratosphere, where they remain for many years. The Sun keeps the particles aloft while the weather that would otherwise wash the soot out remains below in the troposphere.

Modern computers allow scientists to model the climate in greater detail than in early studies of nuclear winter, Robock said. In previous studies, soot particles were a fixed, unchanging size. New models consider how soot particles can combine and grow. This process may cause them to fall out of the upper atmosphere more quickly, potentially reducing particle life by 10 percent.

More advanced models also allow researchers to examine the impact to human food supply in greater detail. For the first time, the study is considering crops in all countries, as well as ocean biogeochemistry. Fish, which respond to impacts on their food supply, constitute a third of human food consumption.

“We really need to use multiple models to get robust results,” said Lili Xia, a research associate in the Department of Environmental Sciences. Models always contain a certain amount of uncertainty, but Xia, the crop modeler on the project, is working to get as many crop modeling groups involved as possible. This will help characterize the amount of uncertainty.

“We only have one earth,” said Hainan Zhang, a Rutgers doctoral student in the Department of Industrial and Systems Engineering, who is Dr. Robock’s economic analyst on the project, who is working with Associate Prof. Gal Hochman from the Department of Agriculture, Food & Resource Economics.  Zhang became interested in the topic while taking Robock’s Modeling Climate Change (16:107:544) class, he said.

Zhang will study how nuclear war would affect food pricing using a Computable General Equilibrium economic model, which accounts for the effects of changing food production of global trade.

In the event of nuclear winter, countries may no longer have the crops to feed their own people. This will increase a country’s demand for imports and decrease its supply for exports, Zhang said. If the whole world is affected, prices would shoot up due to a global lack of supply.

Robock’s work on this project is motivated by more than just intellectual curiosity.

“If I find a danger to the world, I think it’s my obligation to tell people about it and let them make decisions,” Robock said.

In the early 1980s, Robock had developed a climate model that calculated the long-term climatic effects of volcanic sulfate particles in the atmosphere. He repurposed this model to investigate how nuclear war would impact the planet. The results were published in the journal Nature in 1984.

Soviet scientists were independently reaching the same conclusions. “It was a very powerful message from both American and Russian scientists that the science was right,” Robock said.

As the Cold War wound down, the results helped motivate U.S. President Ronald Reagan and Soviet leader Mikhail Gorbachev to agree to reduce the number of nuclear weapons.

The interest in nuclear winter died down until about ten years ago, Robock said. Then Brian Toon and Richard Turco, scientists who participated in the first studies in the 1980s, approached Robock at a Fall AGU Meeting about researching the effects of nuclear war between two new nuclear nations.

The research modeled a war between India and Pakistan. Each nation has around 100 nuclear weapons – more than an order of magnitude smaller than the American and Soviet arsenals. The study found that detonating less than half of the Indian and Pakistani arsenals and using only small bombs like those dropped on Hiroshima “would still produce climate change unprecedented in recorded human history,” Robock said.

Food production around the world would fall by 20-40 percent for at least five years, he said.

Informed by his research, Robock advocates for the worldwide ban of nuclear weapons and has contributed to the efforts of the International Campaign to Abolish Nuclear Weapons (ICAN). ICAN won 2017’s Nobel Peace Prize for informing the world about the humanitarian impacts of nuclear war and for its role in developing the Treaty on the Prohibition of Nuclear Weapons.

This treaty, approved by a United Nations conference in July 2017, will go into effect when it is signed and ratified by 50 countries. Currently, it has been signed by 56 countries – none nuclear-armed – and ratified by 3.

“Why do we have so many [nuclear weapons]?” Robock asked. “You can’t possibly use them. They don’t make us safer; they don’t deter any attacks. How many nuclear weapons do you need to put on the capital of your enemy to deter them from attacking you? The answer is one. A couple hundred is more than enough, so why do we still have thousands?”

In addition to his advocacy, Dr. Robock is featured in two books published in 2017.

In Richard Clarke’s Warnings: Finding Cassandras to Stop Catastrophes, Robock warns of the effects of nuclear winter. Cassandra is a mythical character gifted with the ability to accurately prophesize the future, but cursed such that no one ever believes her. Robock is also an author of a chapter in Helen Caldicott’s Sleepwalking to Armageddon: The Threat of Nuclear Annihilation.