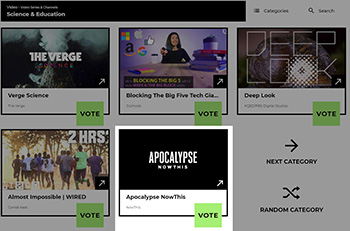 The web series seeks to accurately explain various ways the world could end. Public voting for the Webby ends April 18, 2019.

In Apocalypse NowThis, Levin is featured in a segment on supervolcanos.

According to the show’s co-producer, Jonathan Argudo of DANGERWORKS, “Apocalypse NowThis explores various ways the world could end, and through interviews, demystifies information the media has misinterpreted. Each episode focuses on a different topic such as Supervolcanoes, Societal Collapse, and Quantum Destruction. Sure – it’s a morbid theme, but it’s educational and it attempts to dispel fear and replace it with logic. The series is available to stream here: https://www.facebook.com/ApocalypseNowThis/.”

The show has been nominated for a Webby Award in the Science and Education category. Voting is open to the public and ends tomorrow, April 18, 2019.

Step 1: Follow this link and select the thumbnail for Apocalypse NowThis: