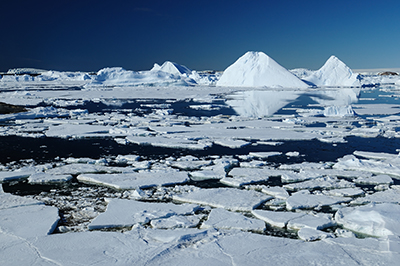 The extreme South Pole warming is within the range of natural variability, based on climate modeling simulations, but warming caused by humanity’s greenhouse gas emissions likely intensified it.

The South Pole has warmed at over three times the global rate since 1989, according to a paper published in Nature Climate Change. This warming period was mainly driven by natural tropical climate variability and was likely intensified by increases in greenhouse gas, the study suggests.

The Antarctic climate exhibits some of the largest ranges in temperature over the course of the year, and some of the largest temperature trends on the planet, with strong regional contrasts. Most of West Antarctica and the Antarctic Peninsula experienced warming and ice-sheet thinning during the late twentieth century. By contrast, the South Pole — located in the remote and high-altitude continental interior — cooled until the 1980s and has since warmed substantially. These trends are affected by natural and anthropogenic climate change, but the individual contribution of each factor is not well understood and challenging to precisely determine.

Dr. Kyle Clem, lead author of the study and former Rutgers Institute of Earth, Ocean, and Atmospheric Sciences postdoctoral associate, and colleagues including Professors Jim Miller of the Department of Marine and Coastal Studies and Ben Lintner of the Department of Environmental Sciences, analyzed weather station data, gridded observations and climate models to examine warming trends at the South Pole.  Their study found that the strong warming over the Antarctic interior in the last 30 years was chiefly driven by the tropics, especially warm ocean temperatures in the western tropical Pacific Ocean that increased the delivery of warm air to the South Pole.  The authors suggest these atmospheric changes along Antarctica’s coast are an important mechanism driving climate anomalies in its interior.

The authors argue that these warming trends were unlikely the result of natural climate change alone, emphasizing that the effects of added anthropogenic warming on top of the large tropical climate signal on Antarctic climate have worked in tandem to make this one of the strongest warming trends worldwide.