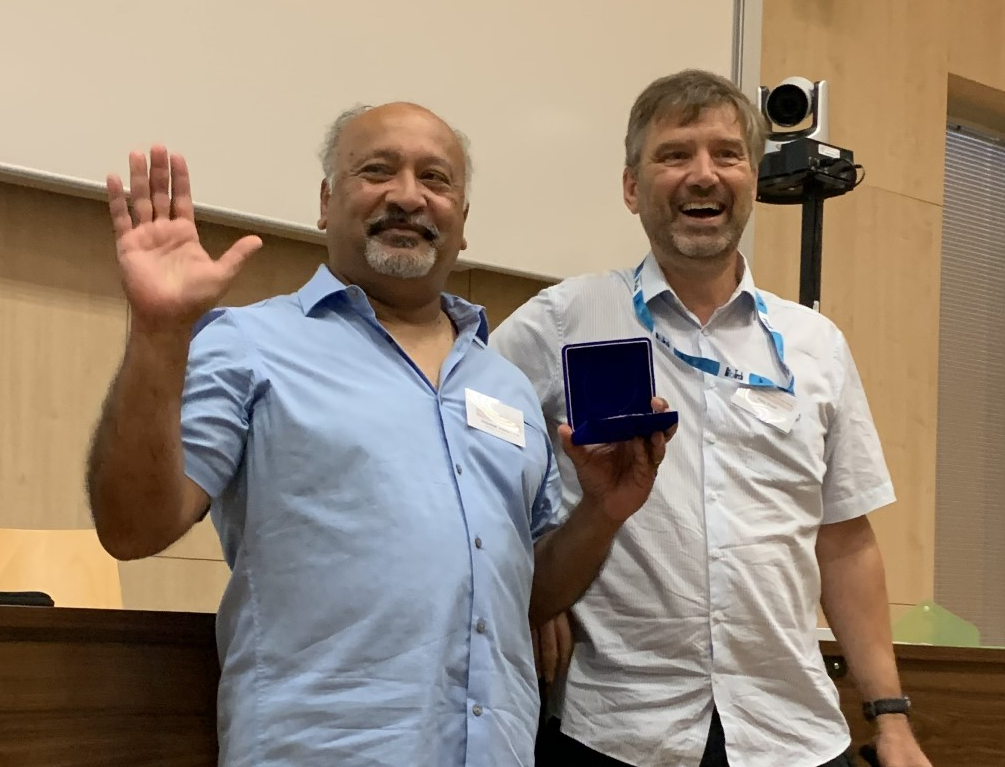 Distinguished Professor Debashish Bhattacharya in the Department of Biochemistry and Microbiology at Rutgers–New Brunswick School of Environmental and Biological Sciences was awarded the 2022 Miescher-Ishida Prize by the International Society of Endocytobiology (ISE) and the University of Tübingen, Germany.

He received the award at the 21st Symposium of the ISE in České Budějovice, Czech Republic, on July 21, and presented the lecture, “What has Paulinella taught us about primary plastid evolution?”

Bhattacharya was recognized with the Miescher-Ishida Prize, which comes with a medal and a cash award, for his many contributions to the field of plastid endosymbiosis, determining the place of algae in the tree of life, investigating the biology of extremophiles and for bringing high-throughput genomics methods to address many questions in algal evolution.

Endosymbiosis occurs when one cell captures and maintains another cell in its cytoplasm, turning the captive into a nanomachine to do the bidding of the ‘host’ cell. This process gave rise to the organelles, plastid (e.g. chloroplast) and mitochondrion, which are powerhouses of life on our planet. Plastids are the sites of photosynthesis and typify plants and algae that are critical primary producers in many ecosystems. Endosymbiosis is also a driving force for generating biodiversity by allowing photosynthetic cells to occupy different light environments in water, land, snow and ice, and even in extreme habitats such as those associated with hot springs.

Given the importance of these processes, the Miescher-Ishida Prize was created in 1986 by Dr. Masahiro R. Ishida, “in commemoration of the discoveries of nuclear and extranuclear DNA” and to acknowledge outstanding scientists who have made unique findings in the field of endocytobiology (endosymbiosis) or contributed to the development of this field. Dr. Ishida was the first to extract chloroplast DNA, together with Dr. Ruth Sager in 1961, while Dr. Friedrich Miescher is recognized for his contribution to DNA isolation, done in Tübingen, in 1869.

The first Miescher-Ishida Prize was presented to Dr. Lynn Margulis in 1986, a pioneer in the endosymbiosis field who championed the idea of cells within cells giving rise to complex life. Other award recipients include Dr. Robert Trench in 1994, who worked on metabolic flux in algal symbionts, and Dr. Margaret J. McFall-Ngai in 1999 and Dr. Edward G. Ruby in 2000, who worked on the complex squid/luminous bacteria association.

Bhattacharya, who came to Rutgers in 2009, conducts funded research on algal and coral biology and evolution, with a symbiosis perspective. His more recent work focuses on identifying coral stress markers that can be used in portable instruments to monitor reef health in the field. He also leads an international project aimed at understanding the evolution of life in extreme environments, such as at Yellowstone National Park. His group creates animated videos that present the lab’s work to the public.

This article was published by the SEBS/NJAES Newsroom on August 16, 2022.