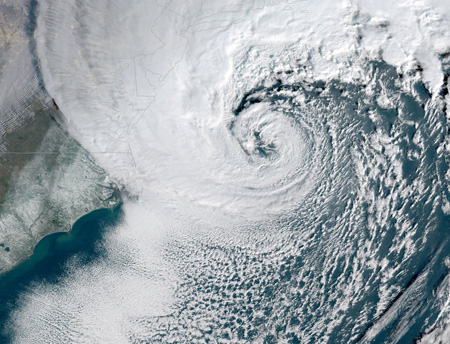 Hurricanes spawn most of the largest storm surges in the northeastern U.S., right? Wrong, according to a study by Rutgers University–New Brunswick scientists.

Extratropical cyclones , including nor’easters and other non-tropical storms, generate most of the large storm surges in the Northeast, according to the study in the Journal of Applied Meteorology and Climatology. They include a freak November 1950 storm and devastating nor’easters in March 1962 and December 1992.

In a first, the Rutgers scientists found intriguing trends after searching for clusters of, or similarities among, storms, said study coauthor Professor Anthony J. Broccoli, chair of the Department of Environmental Sciences in the School of Environmental and Biological Sciences. It’s a new way of studying atmospheric circulation.

“We wanted to understand the large-scale atmospheric circulation associated with storm surges,” said Arielle J. Catalano, the study’s lead author and a doctoral student in the Graduate Program in Atmospheric Science at Rutgers–New Brunswick. “It’s an atmospheric approach to the surge-producing storms.”

The study covered the 100 largest storm surges driven by extratropical cyclones at Sewells Point in Norfolk, Virginia, The Battery in southern Manhattan in New York City, and Boston, Massachusetts. It excluded hybrid systems, like Superstorm Sandy, that shifted from tropical to non-tropical or were tropical up to 18 hours before peak surges.

The Rutgers scientists examined tide gauge records from the early 20th century through 2010. They analyzed atmospheric circulation during storms to look for clusters, and studied climate variability patterns that influenced circulation in the Northeast. They also looked at the probability of surges linked to much larger-scale atmospheric patterns that cover vast areas. 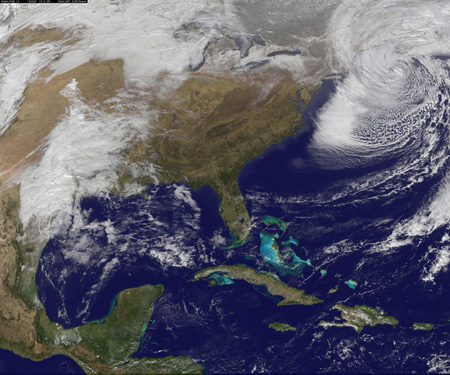 They found that the biggest surges develop when slowly moving extratropical cyclones (low pressure systems) encounter a strong anticyclone, or high pressure system. That scenario leads to a tighter pressure gradient (the contrast between low and high pressure) and longer-lasting onshore winds, the study says.

This favorable environment for large storm surges is influenced by large-scale atmospheric patterns, including El Niño, the Arctic Oscillation, the North Atlantic Oscillation and the Pacific-North American pattern.

Though Superstorm Sandy in 2012 led to the largest storm surge on record at The Battery, extratropical cyclones spawned 88 of the 100 largest surges there.

The November 1950 “Great Appalachian Storm,” with wind gusts exceeding 140 mph in the mid-Atlantic region, generated the highest extratropical cyclone surge at The Battery: nearly 7.9 feet. That’s only 20 percent smaller than Sandy’s surge – 13 percent smaller if sea-level rise is not considered, the study says.

The water level during the 1950 storm was lower than during Sandy because the surge peaked at close to low tide. Future extratropical cyclones could cause Sandy-like flooding and coastal damages.

“The elephant in the room is sea-level rise,” Broccoli said. “That will likely matter more than how storms may change in the future, but what happens will be a combination of the two factors.”

This article was written by Todd Bates and originally published by Rutgers Today on February 14th, 2018.