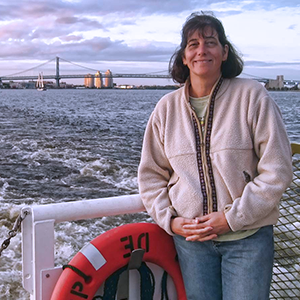 The annual lecture recognizes outstanding contributions to the field of paleoceanography.

Sikes will deliver her lecture, titled “The Southern Ocean’s role in glacial cycles: Engine not caboose?” at the Ocean Sciences section luncheon on Tuesday, December 8, 2020. The AGU Fall Meeting will be held virtually December 1 – 17, 2020.

The Cesare Emiliani Lecture “is presented annually and recognizes outstanding contributions to the field of paleoceanography, and honors the life and work of the renowned paleoceanographer Cesare Emiliani. The lecture presenter is chosen jointly by the Paleoceanography and Paleoclimatology section and the Ocean Sciences section,” The AGU wrote on its website.

According to the lecture abstract, Sikes will present research discussing “The waters of the worlds’ oceans mingle in the Southern Ocean. The dynamic processes found here play a critical role in earth’s climate engine by impacting ocean-atmosphere CO2 partitioning through changes to overturning circulation dynamics, winds, sea ice extent, and ultimately the biological pump. Southern Ocean dynamics likely played a critical role in glacial-interglacial climate cycles by influencing atmospheric CO2 levels. Recent insights on the relative inputs of the processes that contributed to glacial CO2 sequestration in the deep ocean and outgassing across the last deglaciation have relied on evidence from multiple proxies with a substantial amount of the interpretation relying on oxygen isotopes (δ18O) in biogenic calcium carbonate records. Cesare Emiliani’s pioneering work in the 1950’s using the δ18O in foraminiferal fossils from deep-sea sediments to infer past climate continues be relevant in interpreting glacial-interglacial cycles. Since his work, we have added the ability to use the biomarkers synthesized by Emiliania huxelyi to reconstruct paleo- sea surface temperature. This presentation will present a synthesis of proxies from across the Southern Ocean to examine the critical role this region plays in glaciation and deglaciation, informing the ongoing debate of whether the Southern Ocean was a driver (engine) or follower (caboose).”

Sikes is a professor in the Department of Marine and Coastal Sciences in the Rutgers School of Environmental and Biological Sciences.