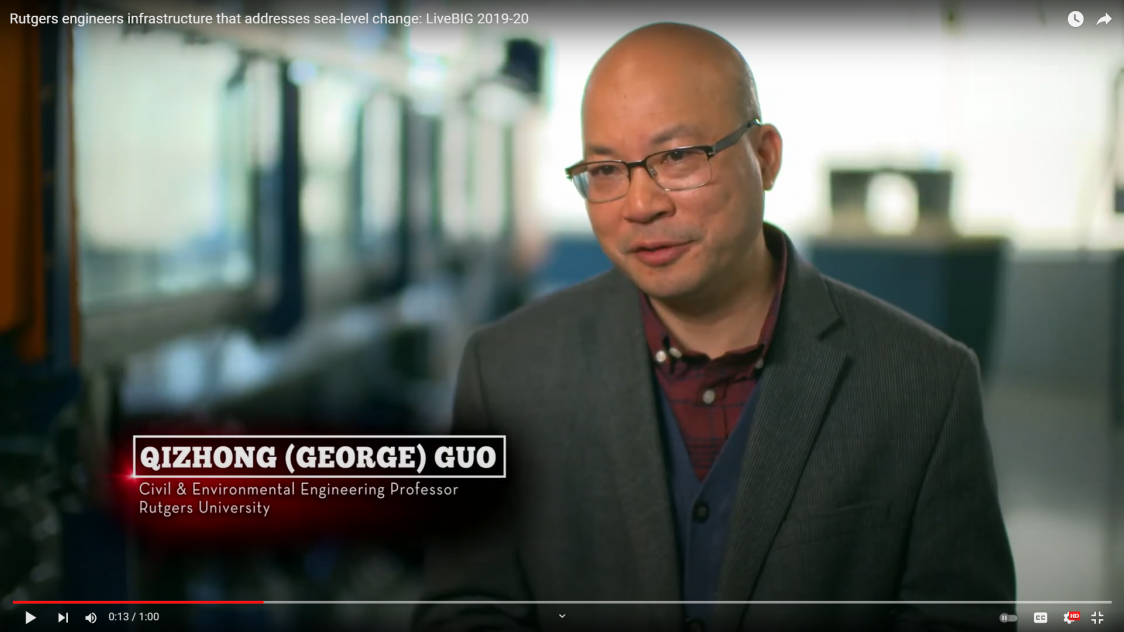 EOAS faculty member Qizhong (George) Guo, a professor of civil and environmental engineering, discussed with BTN’s LiveBIG a few of the solutions he and his team have proposed to address sea level rise.

Representing Rutgers University in a Big Ten Network LiveBIG interview titled “Rutgers Engineers Infrastructure that Addresses Sea-Level Change,” EOAS faculty member Qizhong (George) Guo said, “New Jersey infrastructure is aging, and sea level is rising. What are we going to do about it?”

He and his team have proposed several possible engineering solutions that are both mobile and green, Guo said. They include a mobile wall which can be raised up when sea levels rise, porous parking lots, rain gardens, and harvesting local energy from wave, wind, and rain water which would “power the pump to turn the storm against itself.”

“Our nation has deteriorating infrastructure,” Guo said. “What we think we could do while we are fixing those infrastructures is make them more adaptable to climate change.”

Guo, a professor of Civil and Environmental Engineering in the Rutgers School of Engineering, studies hydraulics and hydrology, urban stormwater and flood management, inland and coastal water environment protection and restoration, water resources and environmental engineering, and green and sustainable water infrastructure.

Guo has also actively served his profession. He has chaired the stormwater technology certification guidelines task committee for the American Society of Civil Engineers, served on a project steering committee for the Water Environment Research Foundation, and served as President of the Chinese American Water Resources Association.

The Big Ten Network, according to the website, is “A joint venture between the Big Ten Conference and Fox Networks,” and it is “the first internationally distributed network dedicated to covering one of the premier collegiate conferences in the country. With more than 1,700 events across all platforms, the 24/7 network is the ultimate destination for Big Ten fans and alumni across the country, allowing them to see their favorite teams, regardless of where they live.”