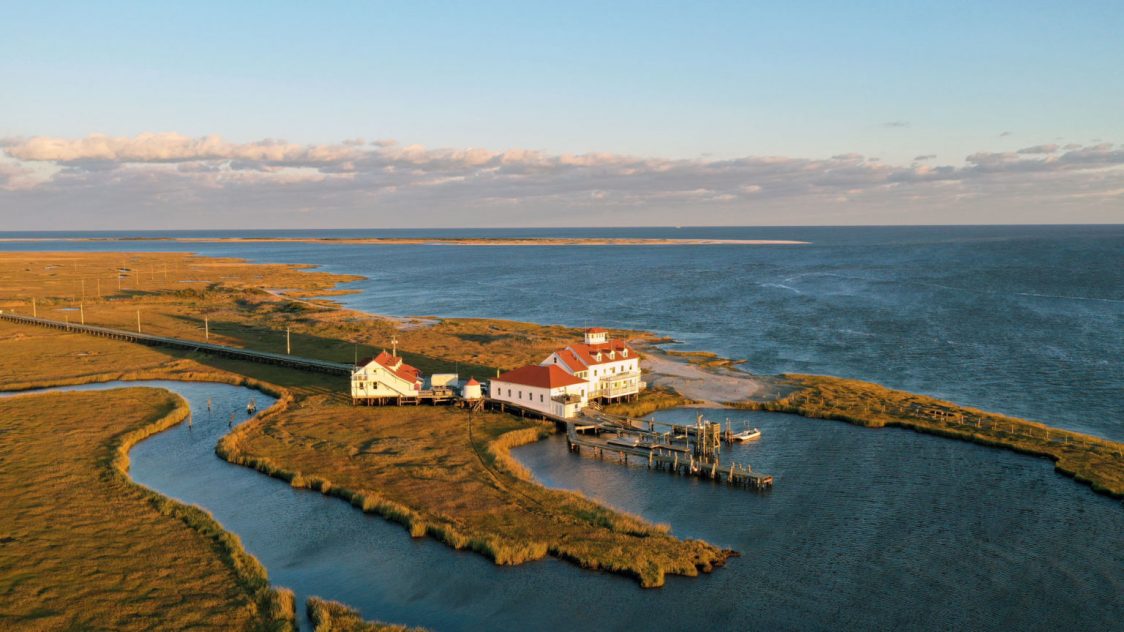 Researchers who study our vulnerable shorelines are moving to higher ground

Scientists at a coastal research station that studies how rising sea levels are threatening Shore communities and the environment are preparing to move their work inland to escape worsening flooding and erosion on an isolated peninsula near Tuckerton.

The Rutgers University Marine Field Station monitors coastal ecosystems and educates about resiliency measures while seas rise ever closer to its buildings and frequently flood the only road that connects it to the Ocean County town about six miles away.

Faced with an inexorable rise in ocean levels until at least the middle of the century, and the forecast of bigger and more frequent storms coming with climate change, the scientists attached to the federally funded Jacques Cousteau National Estuarine Research Reserve in Tuckerton, and who work at the field station, have decided that they want to move to higher ground.

Retreating from the coast

There are no plans to move the field station itself, which is run by the Rutgers Department of Marine and Coastal Science. It’s expected to be fitted with technology that will enable researchers to remotely monitor coastal trends such as erosion even if they can’t be physically present.

Conforming to a retreat from coastal areas that climate scientists say will be needed as seas rise, they are now planning to move the research and education activities to the Tuckerton site where some of its staff are already based.

“How long can you keep telling people that they need to pay attention to this when we’re not paying attention to it ourselves?” asked Lisa Auermuller, assistant manager of the reserve, who works part-time at the field station. “We do need to be leading by example.”

She said mapping shows rapid erosion of the station’s site over the past five years, and there has been a “dramatic” loss of land even over the past two winters. “Our building is literally sitting on the edge,” she said.

For now, workers at the station are challenged by the frequent flooding of Great Bay Boulevard, the road that connects the station with Tuckerton, on a thin strip of land across the marshes.

Auermuller said she had three phone alerts from the U.S. Geological Survey in just the second week of March that the tide was high enough to flood the road, an event that prevents staff entering or leaving the field station. The latest flooding was not surprising given a full moon that week, but that’s little comfort given the expectation that such events will become more frequent as seas rise, she said.

Staff can ask to be alerted to relatively low levels of tide so that they have time to get out of the station before the road floods, but the regularity of flooding has contributed to the decision to leave the site, she said.

“Depending on where you want to set your alert, it buys you a little time. I don’t commute out there every day but if I did, I would want plenty of time to know that I needed to get out,” she said.

The road is maintained by the municipality, while a bridge that it uses is managed by the county, leaving station staff with no control over their only link with the mainland, and adding to the challenges of continuing to work there. “We’re at their mercy,” Auermuller said.

While no one event prompted the decision to leave, Superstorm Sandy in 2012 was a “wake up call” that vividly showed the station’s vulnerability to storms, Auermuller said. The hurricane drove sea waters up under the building’s piling-supported floor and ripped away its waste-water system. For two years afterward, staff had to live without flush toilets, she said.

To begin the process of moving, the center has applied for a $650,000 planning grant from the National Oceanic and Atmospheric Administration, and officials expect to hear by this fall whether they will get the money. But even if they don’t, it’s a matter of “when, not if,” the researchers move, Auermuller said.

The proposed retreat follows an updated 2018-2022 management plan for the 116,000-acre reserve that highlighted its growing exposure to storms. The plan warned that higher water levels mean a relatively mild storm could cause the kind of damage that would be consistent with a major storm under lower water levels.

According to the Science and Technical Advisory Panel, a group convened by Rutgers Climate Institute, the Jersey Shore is likely to see sea-level rise of 0.5 to 1.1 feet between 2000 and 2030, and 0.9 to 2.1 feet between 2000 and 2050. The Shore and the rest of the mid-Atlantic coast are experiencing a higher rate of sea-level rise than many other areas of the globe because the land is sinking at the same time as seas are rising.

Beyond 2050, the rate of sea-level rise will depend on the global rate of fossil-fuel use. Under a so-called high-emissions scenario of unchecked fossil-fuel use, seas at the Shore are like to rise by 1.5 to 3.5 feet between 2000 and 2070, and up to 6.3 feet by the end of the century, the panel said in its latest report, last November.

When they retreat to Tuckerton, the scientists are likely to be joined by other conservation and research groups, including the Barnegat Bay Partnership, another federally funded group that works to restore and protect the bay.

The partnership’s program director, Stanton Hales, said sharing premises with the reserve staff would strengthen an existing partnership that’s based on common interests like climate change and helping to sustain coastal communities.

Hales hopes the planned retreat helps to persuade residents of vulnerable coastal properties to take a more serious look at whether their homes are sustainable, especially if they have flooded before.

“I would hope that the public would see that this is coastal scientists walking the walk and not just talking about sea-level rise,” he said.

Reposted with permission from NJ Spotlight. This story was originally posted on March 19, 2020.