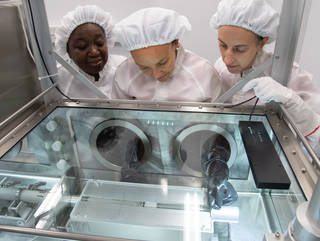 The sample was collected by Apollo 17 astronauts nearly 50 years ago, and it has remained untouched ever since. EOAS faculty member Juliane Gross is a member of the NASA team that opened it for the first-time last month.

On March 25, 2022 at the NASA Johnson Space Center in Houston, a team of NASA scientists, including deputy Apollo sample curator Juliane Gross, an EOAS faculty member and Associate Professor in the Department of Earth and Planetary Sciences, opened a lunar sample collected in 1972 by Apollo 17 astronauts.

CNN, in the article “Apollo 17 Lunar Sample Opened for the 1st Time” described the moment the sample was opened and quoted Gross: “. . . they opened the tube inside a sealed glove box at NASA’s Astromaterials Research and Exploration Science Division in Houston. Arms constrained by the massive gloves of the glove box, Juliane Gross, deputy Apollo sample curator, said it was a painstaking process, but one that was fully worth it. ‘We did this step by step, trying not to lose all the tiny pieces and screws,’ Gross said. ‘We are the first people who got to actually see this soil for the first time. It’s just the best thing in the world — like a kid in the candy store, right?’”

In the article, CNN further explained that the sample was purposely left unopened to give future generations of scientists the opportunity to open a sample that had been left untouched for nearly half a century and analyze it with the instruments the scientists of 1972 anticipated would be developed that far in the future.

The NASA team including Gross opened it last month to help prepare for the next moon landing planned through the Artemis program.

Her research focus, Gross wrote on her website, is on “investigating the formation and evolution of differentiated planetary bodies, such as Moon, Mars, and Earth.  I study in detail the mineralogy, petrology, and geochemistry of planetary samples by using field techniques for terrestrial analogues and micro-analytical techniques.  Such techniques include ElectronProbeMicroAnalyzer (EPMA), Scanning Electron Microscope (SEM), Laser Ablation Inductively Coupled Plasma Mass Spectrometry (LA-ICP-MS), and optical microscopy. I combine these techniques with experimental techniques, such as 1 atm gas-mixing furnaces, hydrothermal diamond anvil cells, and Laser Irradiation Space Weathering experiments in order to learn about crustal and mantle evolution of the parental planetary bodies. I am specifically interested in: rock types poorly/not represented by returned samples and their formation histories especially on the Moon; the chemical and physical conditions and evolutionary history of parental melt on planetary bodies, especially Mars; the volatile constituents of planetary interiors; the use of planetary materials as ground truth for remote sensing; the effect of micrometeorite bombardment and impact gardening on airless planetary surfaces; and terrestrial analogues to planetary environments.”

Below, read more coverage of the historic event Gross participated in, and hear her describe in her own words what it was like to be a part of this groundbreaking NASA team.