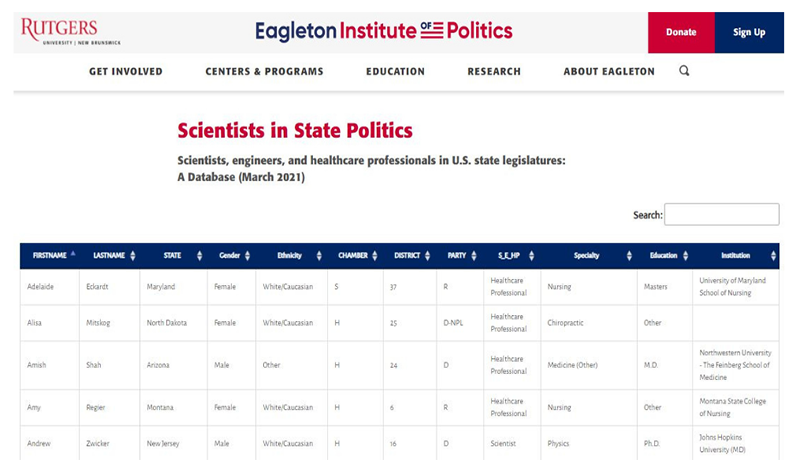 The Science and Politics Initiative at Rutgers’ Eagleton Institute of Politics has launched the first publicly accessible national database of elected state legislators with scientific, engineering and health care training.

“As our nation continues to face the pandemic, climate change, renewable energy infrastructure and other science-based issues, it becomes apparent that the perspectives of scientists who hold elected office are invaluable,” said Anna Dulencin, senior program coordinator of the Eagleton Science and Politics Initiative.

The new database comes a year after the COVID-19 pandemic and economic shutdown and underscores the importance of developing stronger communication and a better understanding between scientists and elected officials, Dulencin said.

“Addressing almost any issue – from facial recognition usage and automated vehicles to wildfires, superstorms and the many ramifications of pandemics – requires policymakers at all levels of government to quickly make critical decisions that are informed by increasingly complex scientific data and understanding,” she said.

According to the data collected at Eagleton, 3 percent of state legislators nationwide are scientists, engineers or health care professionals.

John Weingart, associate director of Eagleton, said the new initiative will provide academics, students, media and the public free access to the database, which will be updated after each general election and when more data becomes available.

“The Eagleton initiative explores how a deeper understanding across the disciplines of science and politics can benefit policymakers, scientists and the larger public,” Weingart said. “Researchers, reporters and interested members of the public can use this tool to look for correlations between innovative science policy at the state level and the number of scientists who are elected to the state legislature.”

“The database was created with the help of Rutgers-New Brunswick undergraduate student researcher and mathematics major Zaynab Khan. We are grateful for her dedication to this work,” added Dulencin.

This article was written by Gabriella Morrone and originally appeared in Rutgers Today on April 16, 2021.