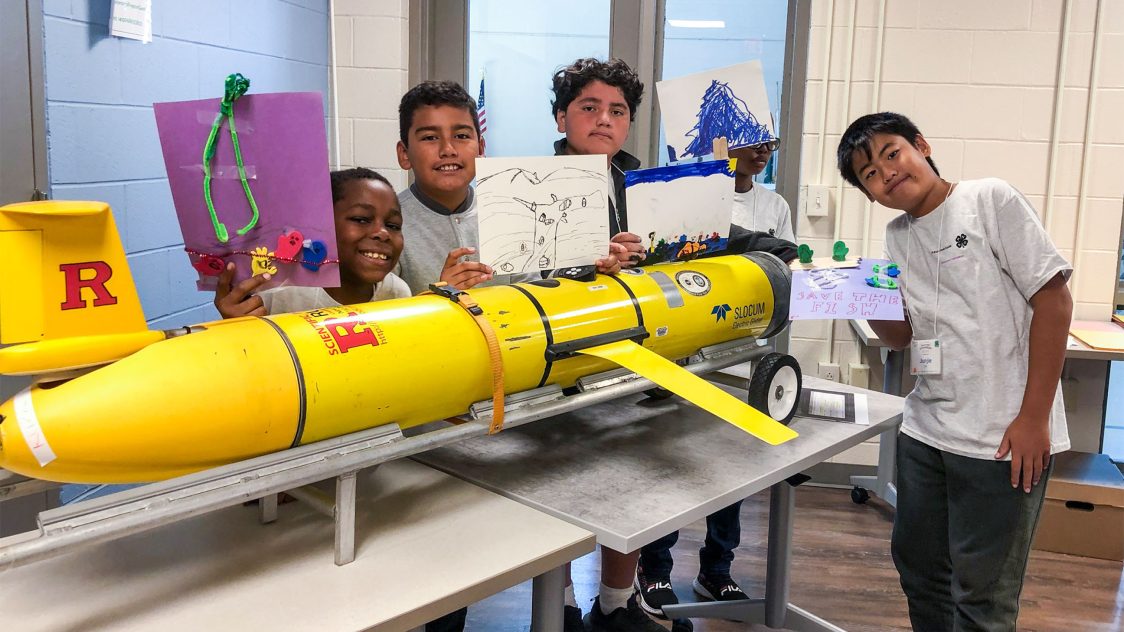 More than 300,000 youth nationwide are learning about Rutgers’ pioneering ocean research using underwater gliders to understand the effects of climate change as part of this year’s 4-H STEM Challenge.

This is the first year Rutgers was chosen to develop the challenge in partnership with the National 4-H Council.

“This is a great example of taking our work from Rutgers and moving it far beyond the borders of New Jersey and impacting young people all across the country,” said Rachel Lyons, chair of the Department of 4-H Youth Development at Rutgers, which spearheaded the project.

The theme of this year’s challenge ties in with the growing concern about climate change among American youth. A recent survey found that 84 percent of teens nationwide want to help shape the future of the environment and believe that political and business leaders are failing to address the climate crisis, according to the poll commissioned by the National 4-H Council.

“Kids really do want to make a difference,” said Janice McDonnell, an associate professor and STEM agent in the Department of 4-H Youth Development, who led the team designing the challenge as part of the 15th annual 4-H STEM initiative, a program geared for children ages 8 to 14. “They want to be part of the solution.”

While the National 4-H Council originally wanted the program to focus on green innovation, Rutgers proposed changing the theme to highlight its research on the Earth’s oceans.

In the 1990s, Rutgers created the Center for Ocean Observing Leadership (RUCOOL) and partnered with Teledyne Marine, a subsea technology company, to deploy underwater gliders as critical tools to collect observational data about the ocean. The battery-powered robot has been submerged in the ocean during hurricanes, which have increased in intensity because of climate change, leading to better monitoring and forecasting of storms.

“The ability to forecast the intensity of hurricanes has been a struggle for the past few decades,” says Oscar Schofield, cofounder of RUCOOL and distinguished professor and chair of the Department of Marine and Coastal Sciences. “Part of the reason is they didn’t have enough ocean data, but now the gliders can be flying through the ocean and collecting that data.”

During the 4-H STEM challenge, students learn how to retrofit a seven-inch model of the glider by ballasting it with coins and fishing weights so that it becomes neutrally buoyant in water. Rutgers’ six-foot-long glider works on the same principle, operating at the intersection of sinking and floating, Schofield says.

In the second activity, students play a board game called Ocean Expedition, which asks players trivia questions and leads them to augmented reality sites where they can watch animated scenes of ocean life. The final activity is creating a public service announcement about one of seven key issues affecting the ocean.

“They can choose whatever they want to do but the goal is to share something they’ve learned about this with someone else,” McDonnell says. “It’s meant to build their leadership skills and mobilize them into action.”

Taking the 4-H STEM Challenge on the Road

Students across the country can take the STEM challenge through 4-H clubs, school science classes and nonprofit organizations. In New Jersey, students in Trenton, Jersey City, Neptune and Newark have participated in the program, led by teams of Rutgers faculty and students,

At the Dr. Michael Conti School in Jersey City, 60 eighth graders worked on the glider and played the board game in a 90-minute session presented by Rutgers staff and students in October. The activity was the third 4-H STEM challenge the PreK-8th grade school has offered.

“The 4-H challenges really bring that hands-on STEM experience to students,” says assistant principal Albert Padilla. “How can one pass that up?”

What the students enjoyed most about this year’s challenge, Padilla says, was working on the glider and learning that it is an actual research project developed at Rutgers. “Science is sometimes tough to see and really understand,” he says. “In this case it was something that was right in their own backyard — the glider was out in the ocean right now collecting data.”

The challenge will continue to roll out through next summer, extending into Canada and other countries. Schofield believes it will teach students about the critical role the ocean, which covers 70 percent of the Earth, plays in our lives.

“One of the key concepts is that most people don’t comprehend that even if you don’t live by the ocean, the ocean essentially regulates the weather that you feel,” Schofield says. “It regulates the climate, and the biggest changes on the planet really are going to reflect the changes that we see in the ocean.”

This article was published by Rutgers Today on December 12, 2022.