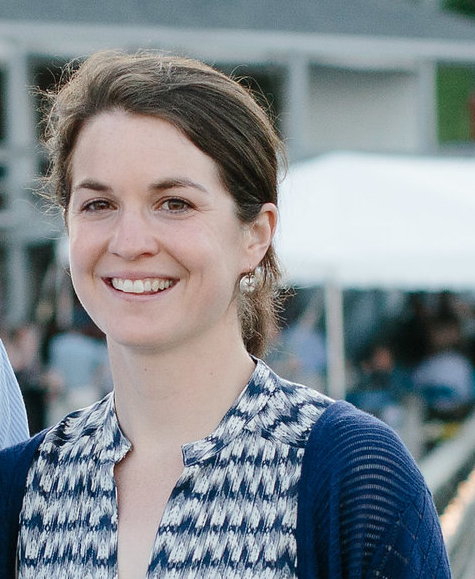 Her research focuses on the underwater melting of glaciers, specifically in Greenland and Alaska, and ocean dynamics in the polar regions where various components of the climate system – ocean, ice, and atmosphere – interact.

Jackson joined the Rutgers Department of Marine and Coastal Sciences this fall as an Assistant Professor. She spent the previous two years as a NOAA Climate & Global Change Postdoctoral Fellow at Oregon State University.

After completing an undergraduate degree in physics at Yale University, Jackson earned a Ph.D. in physical oceanography from Massachusetts Institute of Technology and Woods Hole Oceanographic Institution.

Jackson is excited to join the faculty at Rutgers and to share essential knowledge with students about the dynamics of the earth’s climate system at a time when environmental changes are affecting people on a global scale.

“Understanding the climate system and the scientific basis for future projections is important from a societal perspective. The more students who can take classes that expose them to environmental and climate sciences, the better,” Jackson said.

In the Q&A below, Jackson describes the research she is currently focused on, and her experience so far as an assistant professor at Rutgers.

Broadly, what do you hope to discover through your research in the polar regions?

I’m interested in the polar oceans and how the ocean interacts with ice, or the cryosphere. I am a physical oceanographer, which means I study the physics of the ocean, how it moves around heat and freshwater. I’m particularly interested in how the ocean interacts with glaciers. Glaciers drain ice into the ocean, and I study the underwater melting of glaciers and the fate of glacial meltwater in the ocean as it impacts  ocean circulation. I’m looking at both directions of ocean-glacier interactions: how the ocean impacts glaciers through underwater melting, and in the other direction, how increased meltwater from glaciers affects the ocean. Big picture, we want to understand, as the ocean warms in the coming decades and century, how will changing ocean conditions drive changes in glaciers, and then how will those glacier changes feedback on the ocean, by raising sea level and altering ocean circulation.

Your research was referenced this summer by Time. What are the implications of your findings in this study? How will this research be furthered?

I’ve been working on a collaborative project at LeConte Glaciers in southeast Alaska.  This is a marine-terminating glacier, or a glacier that flows into the ocean, and it’s very similar to the glaciers around Greenland that I also study, but it’s smaller and more accessible. For this reason, we’ve been able to study it with a comprehensive field program over the past three years. With an interdisciplinary team we’ve made direct measurements of the underwater melting of the glaciers, while simultaneously measuring the ocean conditions in front of the glacier and the glacier properties.The Timearticle referenced a paper that came out over the summer, which was the first in a set of papers about the melting of this glacier.

We have found that the underwater melting of this glacier is happening at a much higher rate than we expected. We have theories and models that try to estimate the melt rates based on ocean temperatures and other factors, but these theories haven’t been tested with direct measurements until recently. It’s difficult to get any observations right where the glacier meets the ocean, due to the dangers of icebergs calving off the glacier. So, we used a new method, a sonar that is  usually used to map the seafloor, to show that these melt rates are much higher than what we expected based on existing theory and models.

The next step of this work is in a paper that I have coming out this week. We’ve been using autonomous (basically remote-controlled) kayaks to go directly in front of the glacier, where you can’t bring a ship. We’ve used these kayaks to survey the ocean in the first couple hundred meters in front of the ice comprehensively over a set of field campaigns. What we’ve found is that you can see all these intrusions of meltwater peeling off the glacier and we can directly measure the process that’s causing the elevated melt rates. Essentially, the first piece was finding that the melt rates are higher than what we would expect and the next piece that’s coming out, which reflects ongoing work, explores  why these melt rates are so much higher than we’d expect and what are the physics that control melting.

If we can put those two things  together –knowing the melt rates and knowing  the physics that cause those melt rates – then we can look to the future and say how melting should vary in time. The piece that I’m focused on right now is trying to understand the physics of what controls melting and how it varies with ocean temperature and other conditions.

What factors first inspired you to become interested in the field of physical oceanography and determine the focus of your research and teaching?

My background as an undergraduate student was in physics, which I enjoyed. I came to physical oceanography through my interest in physics and also through a budding interest in environmental sciences. Growing up, I spent a lot of time on the water and so I always had a recreational interest in the ocean. As I learned about the field of physical oceanography, I discovered that I could combine my interests in physics and climate/environmental sciences with my appreciation for the ocean. It also provided a way to practice applied physics out in the field, a natural environmental, all while trying to understand some fundamental climate dynamics.

In the current political climate, what are your thoughts on all students gaining awareness about environmental issues such as glacier melting?

One important motivation to my field of study is sea level rise. Glaciers are losing mass and shrinking, and that lost ice goes into the ocean and raises sea level. This has global impact. Around New Jersey, the sea levels that we observe are partially due to glaciers melting in Greenland and Antarctica. What happens in the polar regions affects the climate globally and coastal communities around the world. And in order to make projections for the future, we need to understand what is driving changes in the glaciers – from both warming atmosphere and warming ocean – and underwater melting of glaciers appears to be a critical piece in this puzzle. Having a basic understanding of how the climate system works is valuable for everyone. I would advocate for all students to try to gain some background in earth and environmental sciences, because everyone is affected by these issues. Understanding the climate system  and the scientific basis for future projections is important from a societal perspective. The more students who can take classes that expose them to environmental and climate sciences, the better.

Will you teach undergraduate or graduate courses this year?

This is my first semester teaching and so far I’m really enjoying it. Right now I’m teaching Introduction to Physical Oceanography, which is a class for incoming graduate students and upper-level undergraduates. Going forward, I hope to teach a course on polar climate dynamics for graduate students.

What information, knowledge, and critical messages do you strive to impart to your students?

I hope they come away with some fundamental principles and appreciation for how we can use physics and simple equations to understand the ocean and environment. I think Introduction to Physical Oceanography is a fun course to teach because it builds from first principles in the same way that you do in a physics class, but it’s applied to the ocean and climate. I hope students come away seeing those connections between basic physics and the environment around them. Also, that they gain some analytical, problem-solving skills that they can use when studying physical oceanography or other aspects of the climate system – or in any other careers they might pursue.