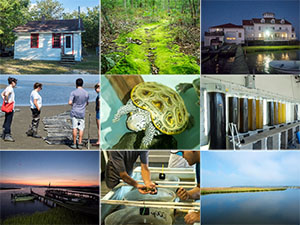 The group of seven Rutgers graduate students on the 2018 Graduate School Tour arrived at the Rutgers University Marine Field Station (RUMFS) in Tuckerton, N.J. on Friday evening of the last weekend of September. As the group in a Rutgers van approached the field station, traveling first on a narrow road through vast coastal marshes, then down the long RUMFS causeway, a long driveway built on stilts in the water and headed right out into the middle of the bay, the field station appeared in the distance.

An island unto itself surrounded by the sparkling waters of the pristine Mullica River-Great Bay Estuary, RUMFS was built in the 1930s as a Coast Guard Station. The traditional “Roosevelt-Style” white-wood-shingled, dormered building with an elegant cupola appeared more like a beautiful 1930s mansion than a working marine research laboratory that is home to some of the most unique and valuable data in the world.

This was only one of four remarkable and inspiring stops on the annual tour, which has long been a Rutgers tradition within the Graduate Program in Ecology and Evolution. Co-hosted with the Rutgers Institute of Earth, Ocean, and Atmospheric Sciences (EOAS) since 2017, the tour is now open to all first-year students from any graduate program with a disciplinary focus in Earth system science.

This fall, graduate students from four different programs (Ecology and Evolution, Oceanography, Geography, and Earth and Planetary Sciences) took the tour. In addition to RUMFS, they explored the Rutgers Cape Shore Laboratory (which is part of the Haskin Shellfish Research Laboratory (HSRL)), the New Jersey Aquaculture Innovation Center (AIC), and the Rutgers University Pinelands Field Station.

EOAS faculty member, Director of the Rutgers Graduate Program in Ecology and Evolution (E&E) and Associate Professor in the Department of Marine and Coastal Sciences (DMCS) Olaf Jensen, has organized the tour for the last four years. He said the trip’s broad goals are to introduce new students to the people and resources available at the field stations, provide an opportunity for students in different programs to get to know each other, and enable students to see the diversity of our state.

“Rutgers University field stations are hidden jewels of our university system and many students don’t discover them until it’s too late,” Jensen said. “The trip is a great bonding experience for students early in their graduate careers about to embark on educational odyssey together, and it helps build community within and across programs.”

“The trip enables students to get to know and learn about the faculty based at the field stations,” Jensen said. “There are many 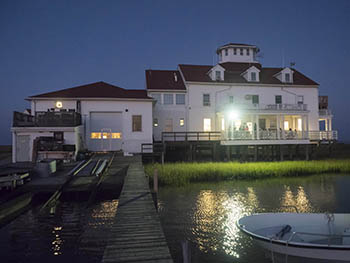 active faculty at Rutgers who are not on the main campus who tend to get overlooked as a resource for graduate students putting together their dissertation committees.”

The tour also exposes the students to the diversity of the data collected, compiled and housed at the field stations. “Every student has different interests,” Jensen said, “so it’s important to cover all the bases.  For me, as a fisheries ecologist, a 30-year time series of larval fish abundance at RUMFS is pretty cool.  However, not everyone gets as excited about that one as I do.  For other students it may be the opportunities for experimenting in forests at the Pinelands Station or the algae culture facilities at the AIC.  Or learning that Dr. Grothues is an expert on multivariate statistical methods and is available to serve on dissertation committees.”

The group left New Brunswick on Friday afternoon and kicked off the weekend with a tour of the Pineland Field Station. On Friday evening they attended a meet and greet with faculty over pizza at RUMFS. Saturday morning the group gathered for a breakfast of bagels and coffee and then attended several lectures and tours at RUMFS, held by Distinguished Professor and Director of RUMFS Kenneth Able and Associate Research Professor Thomas M. Grothues. Students and faculty gathered at a Mexican restaurant for lunch, and afterward the group met with Professor  David Bushek and his team for a tour of the Haskin Shellfish Research Laboratory (HSRL). Afterward they travelled to Cape May for a tour of the AIC where Grothues is also a faculty member.

The tours at RUMFS included the wet lab, the docks and the cupola, which afforded a wide view of the bay. Describing RUMFS, Grothues said, “The RUMFS is an important resource for scientists, and especially graduate students, in providing a conduit to work in the marine environment. Here, boats, docks, mud, worms, fish, and waves are in close proximity to labs, technical shop benches, tanks, and computers. Beyond facilitating logistics, the RUMFS facilitates observations and a visceral connection to the marine environment inclusive of the sounds of surf and gulls and the smell of salt air and decaying marsh plants. It lets students know that Rutgers retains a presence in the environment that excites them to get into marine science in the first place.”

Describing her impressions of the trip, Anya Hess, a Ph.D. student in the Rutgers Department of Earth and Planetary Sciences, said, “I really enjoyed meeting  researchers and spending time with some of the other incoming grad students while touring the field stations. One of the advantages of a big university like Rutgers is the diversity of topics that people are studying, which can provide a lot of opportunities for collaboration. I was very happy to have been included and hope to interact with EOAS more in the future.”

Asked which facility she enjoyed touring the most and why, Carolyn Iwicki said, “I’d say it’s a tie between the Tuckerton Station and the Aquaculture Innovation Center in Cape May.  I’ve been vacationing (and fishing!) in Cape May my whole life, so finally being able to tour that ‘I heard it’s some sort of aquaculture facility’ building my family has been speculating about as we pass it on the Cape May Canal was a lot of fun.  The Tuckerton Station, on the other hand, was packed to the gills with the kind of marine and fisheries resources I could use in my own research, so I greatly enjoyed it.  The diversity of wildlife we saw on the trip only added to the experience — among other things, we saw fiddler crabs, a monarch butterfly, a marsh harrier, and a juvenile peregrine falcon.”

Also beneficial, Iwicki said, was “seeing the field stations in person and speaking with the people who work there were by far the biggest benefits of the trip.  I tend to form my best research ideas after chatting with people, so being able to talk to my station-based colleagues and learn all about the research they’ve done, are doing, and hope to do was a major benefit.”

Iwicki said what amazed her the most during the tour was “the seemingly magical abilities of mushrooms I learned about at the Pinelands Station. Using mushrooms to mop up heavy metals from contaminated sites?  That’s something I never would have thought of.” 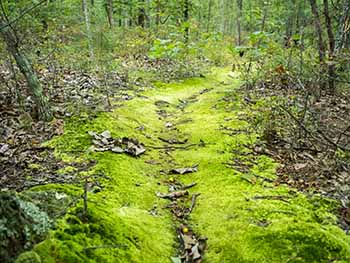 At the HSRL’s Cape Shore Laboratory, the students saw first-hand how the lab develops oysters for market all over the United States.  In massive tanks, the lab grows oyster broodstock that are, when they are mature enough, sent to hatcheries where they continue to grow and are then sent to market. The funds received from selling the brood stock to commercial oyster farmers funds maintenance of the lab and research. The lab works continuously to improve the genetic lines of oysters in order to develop products to help the oyster farmers succeed, and the lab supports farmers from N.J. to Maine. In 1960 Hal Haskin, a Rutgers professor, started the shellfish breeding program.

Professor and Director of the HSRL, David Bushek said, “New Jersey offers a wide and diverse array of habitats that rival or exceed the diversity in most states.  The graduate tour helps expose Rutgers graduate students to this diversity and the array of opportunities available to them as they embark on their graduate studies.  For students entering the Graduate Program in Ecology and Evolution, the Haskin Shellfish Research Laboratory provides real examples of the counter-intuitive need to protect and sustain natural resources while exploiting them for human consumption.”

Iwicki, asked if, as a result of the tour she might be more likely to conduct research at any of the facilities she saw, or work directly with the researchers she met, said, “In the long run, it probably will.  I plan on focusing my research on recreational fisheries and climate change — I’ll be working with marine recreational fisheries in N.J. in the relatively near future — so there’s a good chance I’ll be conducting some sort of research at the Tuckerton Marine Field Station. I may try integrating more field research into my work after learning about all of the marine and fisheries resources available. I definitely feel inspired to do even more field research now.  The sheer amount of resources Rutgers has is empowering.”

Coming soon! A series of videos taken during the tour exploring in detail the research taking place at Rutgers field stations. EOAS will announce via Twitter when these exciting videos are posted.

Top Center: Moss covered path through the Silas Little Experimental Forest near the Pinelands Field Station. This particular path leads from the station to a tall weather tower that monitors water and carbon transfer between the forest and sky.

Center: A juvenile Northern Diamondback Terrapin (Malaclemys terrapin) at the Aquaculture Innovation Center in North Cape May, N.J. These turtles are native to the local brackish marshland, and are listed as a species of “special concern” in N.J., due to multiple threats to their habitat.

Middle Right: Algal growth chambers at the Haskin Shellfish Research Laboratory’s Aquaculture Innovation Center. The algae species grown in these chambers are used to cultivate the variety of shellfish raised at the center.

Bottom Left: View of the dock at dusk behind the Marine Field Station in Tuckerton, N.J.