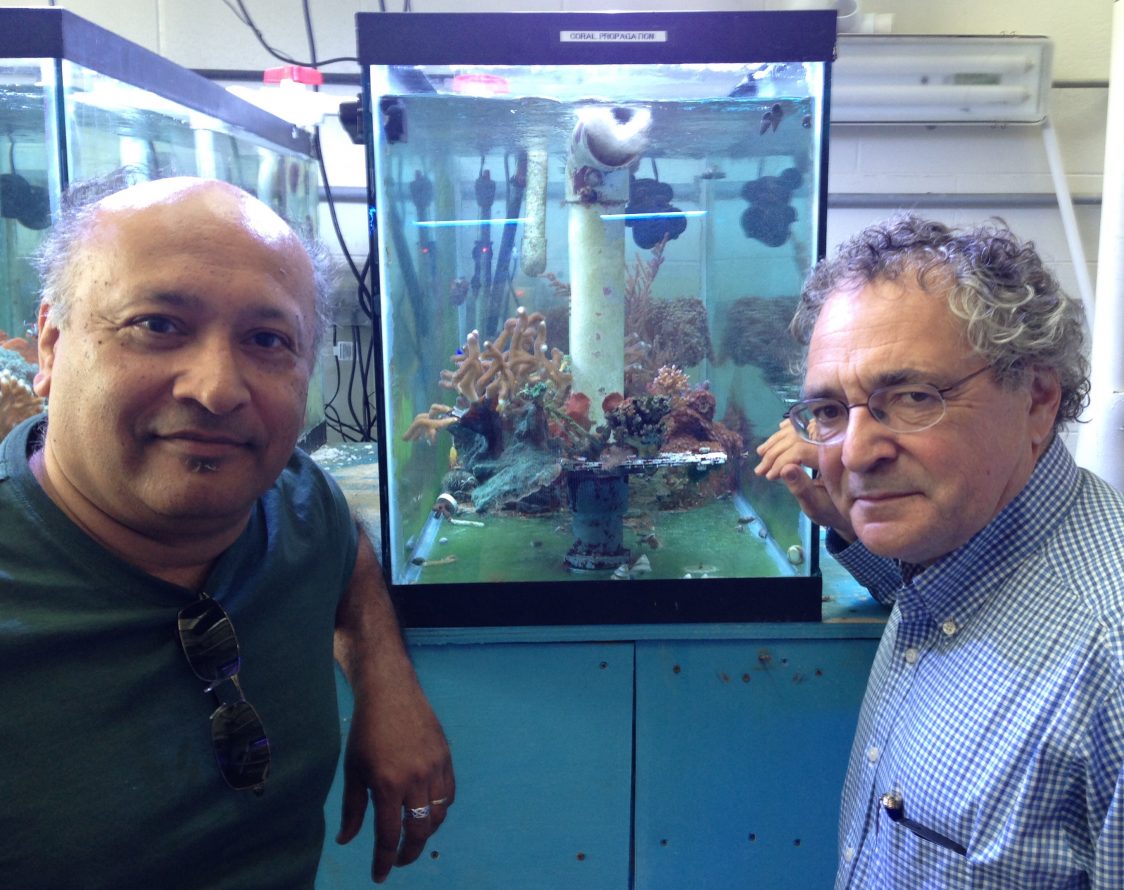 Coral reefs – stunning, critical habitats for an enormous array of prized fish and other species – have survived five major extinction events over the last 250 million years.

Now, an international team of scientists led by Rutgers faculty has conducted the world’s most comprehensive analysis of coral genes, focusing on how their evolution has allowed corals to interact with and adapt to the environment. A second study led by Rutgers researchers with colleagues at the University of Hawaii shows – for the first time – how stony corals create their hard skeletons, using proteins as key ingredients. “There are a few key genes in corals that allow them to build this house that laid down the foundation for many, many thousands of years of corals,” said  Debashish Bhattacharya, a professor in the Department of Ecology, Evolution and Natural Resources and EOAS scientist in the School of Environmental and Biological Sciences at Rutgers. “It couldn’t be any more fundamental to ocean ecosystems.”

“I think one of the more interesting aspects of these data will be to understand which coral species may become winners or losers in the face of anthropogenic climate change – what makes them tougher and what makes them susceptible to changes in temperature, changes in ocean acidification,” said Paul Falkowski, an EOAS scientist and professor who leads the Environmental Biophysics and Molecular Ecology Laboratory at Rutgers.

The coral gene database study, led by Bhattacharya and Falkowski, was published today in the journal eLife. The study stems from an international coral genomics symposium and workshop held at Rutgers in February 2014 that was funded by the National Science Foundation. The stony coral study was published in the Proceedings of the Royal Society B: Biological Sciences last month.

Nearly all corals are colonial organisms that consist of as many as hundreds of thousands of animals called polyps. Types of corals include stony, shallow-water species that build reefs, soft corals and deep-water corals that live in dark cold waters, according to the National Oceanic and Atmospheric Administration.

Corals face four major threats from humans:  Destruction of reefs by grenades and poison used to kill fish for food; nutrient pollution, usually from sewage or agricultural runoff, that overstimulates harmful algae; increased heat in the upper ocean, which causes most coral bleaching that can kill reefs; and acidification of the ocean, according to Falkowski.

Recent aerial and underwater surveys have found that 93 percent of the Great Barrier Reef off Queensland in Australia has endured very severe, moderate or at least some coral bleaching this year, according to the ARC Centre of Excellence for Coral Reef Studies in Australia. The reef, a world-renowned tourist attraction, is about 1,430 miles long.

Elevated sea temperatures from global warming can cause corals to expel tiny, colorful algae, according to the center. Corals turn translucent and white when they lose the algae. Mildly bleached corals can recover if the temperature drops and algae can recolonize them. If not, corals may die.

At Rutgers two years ago, leaders in the field of coral biology and genomics met to plan an analysis of 20 coral genomic datasets. The goal was to provide a comprehensive understanding of coral evolution since the organisms appeared on Earth 525 million years ago. The coral database, which includes corals in tropical waters, has been posted on the comparative.reefgenomics.org website to foster growth in this important area of research.

The eLife study’s major advances include explaining the origin and evolution of the unique genes involved in the creation of hard skeletons by corals. The study also serves as a novel toolkit compared with the genes of humans, shellfish and other animals with hard skeletons.

Bhattacharya and coauthors found dozens of genes that allow corals to coordinate their response to changes in temperature, light and pH (acidity vs. alkalinity) and deal with stress triggered by the algae that live with them and exposure to high levels of light.

Surprisingly, some of these stress-related genes are of bacterial origin and were acquired to help corals survive. An intriguing theory that arose from the study is that the vast genetic repertoire of corals may help them adapt to changing ocean conditions.

The study in the Proceedings of the Royal Society B: Biological Sciences – led by former Rutgers Department of Marine and Coastal Sciences post-doctoral fellow Tali Mass – explains how stony corals make their hard, calcium carbonate skeletons. It also explains how this process might be affected as the oceans become more acidic due to climate change. Acidity increases as oceans are exposed to higher concentrations of carbon dioxide, the main greenhouse gas and cause of climate change, in the atmosphere.

“The aragonite (hard skeleton) is not just minerals,” Bhattacharya said. “The proteins are very important for giving it shape and making it stable.”

Falkowski said the study serves as a model for understanding how we can regenerate bone. “There are amazing parallels between the production of the skeleton of coral and production of bone,” he said.