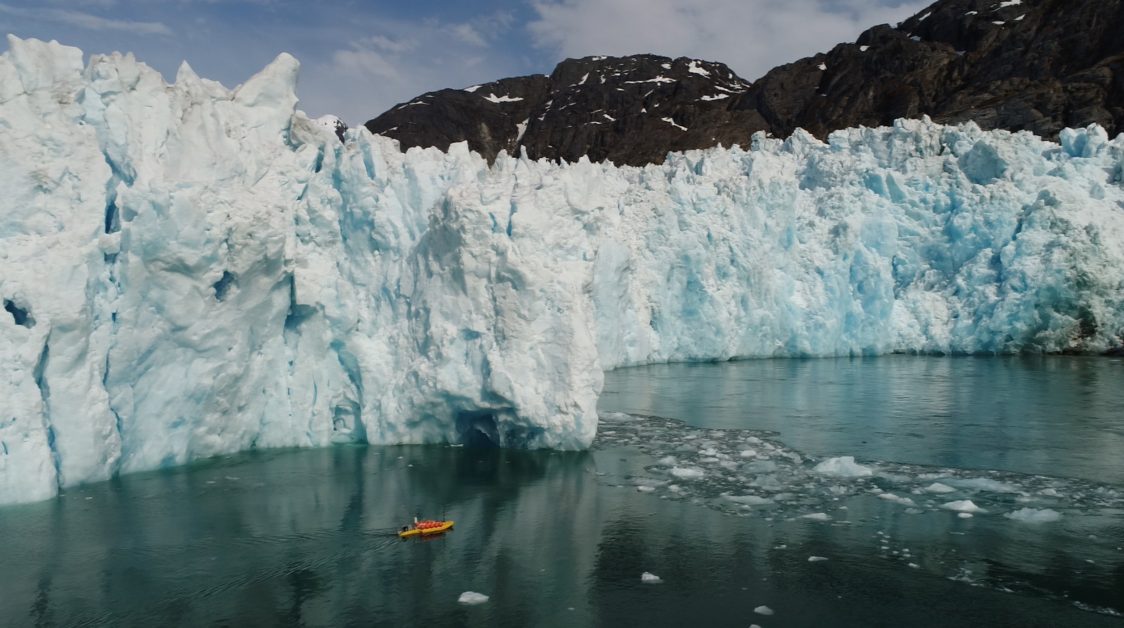 Tidewater glaciers, the massive rivers of ice that end in the ocean, may be melting underwater much faster than previously thought, according to a Rutgers co-authored study that used robotic kayaks.

The findings, which challenge current frameworks for analyzing ocean-glacier interactions, have implications for the rest of the world’s tidewater glaciers, whose rapid retreat is contributing to sea-level rise.

The study, published in the journal Geophysical Research Letters, surveyed the ocean in front of 20-mile-long LeConte Glacier in Alaska. The seaborne robots made it possible for the first time to analyze plumes of meltwater, the water released when snow or ice melts, where glaciers meet the ocean. It is a dangerous area for ships because of ice calving – when falling slabs of ice that break from glaciers crash into the water and spawn huge waves.

“With the kayaks, we found a surprising signal of melting: Layers of concentrated meltwater intruding into the ocean that reveal the critical importance of a process typically neglected when modeling or estimating melt rates,” said lead author Rebecca Jackson, a physical oceanographer and assistant professor in the Department of Marine and Coastal Sciences in the School of Environmental and Biological Sciences at Rutgers Brunswick. Jackson led the study when she was at Oregon State University.

Two kinds of underwater melting occur near glaciers. Where freshwater discharge drains at the base of a glacier (from upstream melt on the glacier’s surface), vigorous plumes result in discharge-driven melting. Away from these discharge outlets, the glacier melts directly into the ocean waters in a regime called ambient melting.

The study follows one published last year in the journal Science that measured glacier melt rates by pointing sonar at the LeConte Glacier from a distant ship. The researchers found melt rates far higher than expected but couldn’t explain why. The new study found for the first time that ambient melting is a signiﬁcant part of the underwater mix.

Before these studies, scientists had few direct measurements of melt rates for tidewater glaciers and had to rely on untested theory to get estimates and model ocean-glacier interactions. The studies’ results challenge those theories, and this work is a step toward better understanding of submarine melt – a process that must be better represented in the next generation of global models that evaluate sea-level rise and its impacts.

This article, written by Todd Bates, was originally published in Rutgers Today on January 28, 2020.