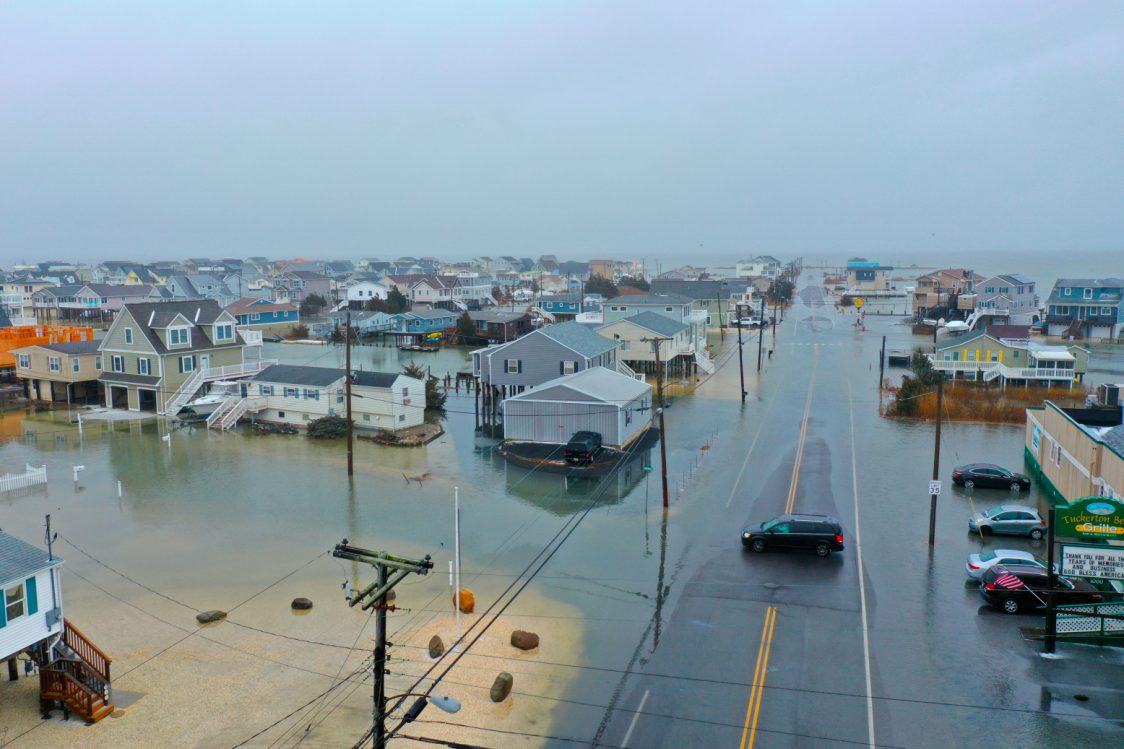 In 2012, New Jersey residents got an alarming tutorial on what unmitigated climate change portends when Hurricane Sandy, one of the worst storms in state history, devastated the coast from north to south, destroying businesses, beach homes, and boardwalks and swamping communities several blocks inland. “The October storm, which carried a price tag of roughly $40 billion for New Jersey, reflected undeniable trends in recent decades: a rising Atlantic and flash floods, record summer heat and humidity, and severe storms. If they had not already, municipal leaders of ravaged communities began taking stock: what was it going to take to protect the coast and populations against the next big storm—or even the less severe, more frequent ones?

New Jersey is not alone. A changing climate is increasingly threatening the world’s coasts, which are economic engines and homes to millions. In the United States, coastal counties produce 40 percent of jobs, contribute more than 58 percent to the nation’s gross domestic product, and contain more than 50 percent of the population and critical infrastructure such as ports and energy-generating stations. Coastal wetlands make up 38 percent of the wetlands in the continental United States, critical for flood protection, erosion control, water filtration, and habitat for wildlife and fish. Addressing climate change is a priority for the Biden Administration, which is promoting green technology and remedial climate measures as the cornerstone of its proposed $2 trillion infrastructure bill. The United States has also rejoined the Paris agreement, the accord signed by nearly 200 nations to take action to limit global warming and avoid its potentially catastrophic impacts.

“There are many parts of the world that are vulnerable to climate change, and the coasts are one part,” says Robert Kopp, director of the Rutgers Institute of Earth, Ocean, and Atmospheric Sciences and a professor in the Department of Earth and Planetary Sciences at the School of Arts and Sciences. “We have communities up and down the New England coastline and the New Jersey coastline that are facing risks from rising seas and intensifying storms. We have more frequent tidal flooding and more intense storm flooding, and we have to reckon with the fact that the shapes of our communities and cities are going to change in response to this.”

One of the ways that Rutgers is helping New Jersey confront climate change is through the Coastal Climate Risk and Resilience (C2R2) initiative. The program, now in its fifth year and directed by Kopp, prepares master’s and doctoral students to collaborate with coastal decision-makers and stakeholders who are trying to prepare for and recover from damaging coastal weather—to develop, in the lexicon of climate change, “resilience.” The effort to safeguard communities, however, requires a lot more than placing structures on ever-taller piers and building more robust seawalls and bridges. In the eyes of C2R2 leadership, it takes a holistic approach, demanding not only student competence in the science and technical aspects of coastal resilience, but also command of the theory and applications of public policy, geography, sociology, economics, urban planning, and ecology. And it is critically important that students be able to communicate the science behind the effects of climate change on coastal populations, communities, infrastructure, and natural systems in helping leaders find lasting solutions and avoid short-term fixes. All told, the transdisciplinary aspect of C2R2—with its mix of coursework, professional development, and emphasis on giving students the leadership skills to lead sustainable coastal resilience initiatives—makes the Rutgers program unique nationally.

“The concept behind C2R2 is to have our students become the coastal climate-risk problem-solvers whom we need in New Jersey,” says Jeanne Herb CC’81, a key administrator of the initiative.  “This program is critically important because what we hear from decision-makers is that to be able to solve the challenges of climate resilience, professionals need to think across disciplines.”

C2R2, funded by the National Science Foundation, is a collaboration at Rutgers among the Institute of Earth, Ocean, and Atmospheric Sciences; School of Environmental and Biological Sciences; Edward J. Bloustein School of Planning and Public Policy; School of Engineering; School of Arts and Sciences; and School of Graduate Studies. Students take courses in engineering, community planning and design, ecology and natural resources, environmental and biological sciences, communications and civic engagement, public policy, and climate science to get a comprehensive overview of the threats posed by climate change. They also take a summer field course hosted at Rutgers’ Jacques Cousteau National Estuarine Research Reserve, in Tuckerton, New Jersey, which has become a New Jersey hub for coastal municipal resiliency planning.

The program culminates with student participation in the Coastal Climate Risk and Resistance Studio. This workshop—led by Herb, who is also the executive director of the Environmental Analysis and Communications Group at the Bloustein School—is the capstone of the C2R2 program, pairing students with a client, such as a coastal municipality, to assess the unique risks posed by climate change and to develop strategies for managing them. The course allows students to apply the various disciplinary perspectives they have learned and work directly with the client in developing land-use, capital improvements, and hazard-mitigation planning. Importantly, the studio experience exposes students to public decision-making procedures and the challenges of contributing scientific information to contentious public policy debates. “Students can’t just talk among themselves,” says Kopp. “They actually have to be able to communicate with the people who have the problems on the ground.”

“One of the most satisfying aspects of the program,” says Carrie Ferraro GSNB’10, the associate director of C2R2, “is seeing the students grow throughout the program, in their understanding of coastal systems as well as in their appreciation of and ability to collaborate with stakeholders outside of academia.”

During fall 2020, students assisted Keansburg and Atlantic Highlands, two northern coastal communities in New Jersey near where the Raritan Bay meets the Atlantic. Each town has its unique sets of challenges that the C2R2 program helped identify and address with remedial steps. Ed Striedl UCNB’79, Keansburg’s lead construction code official, flood plain manager, and zoning officer, welcomed the students’ informed input, relentless curiosity, and enthusiasm. “They brought a lot of things to my eyes,” he says. “It was a different way of thinking about certain issues, problems that we’ve got to think about more during the planning stage.”

Student findings, in turn, were shared with the New Jersey Office of Planning Advocacy, which is part of the effort outlined in Executive Order No. 89. The order was issued by Governor Phil Murphy to advance climate change resilience by establishing a Statewide Climate Change Resilience Strategy as well as a Climate and Flood Resilience Program within the New Jersey Department of Environmental Protection.

“A goal of the studio was to incorporate resilience into local planning initiatives and take those lessons learned from working with local municipalities and share them with the Office of Planning Advocacy at the state level,” says Janine Barr, a master’s student in the graduate program in oceanography who participated in the C2R2 program. Before coming to Rutgers, she had been a policy fellow at the U.S. Environmental Protection Agency and was interested in learning how decisions made in Washington or Trenton affected change locally. “Through conversations with Atlantic Highlands officials, I learned the breadth of responsibilities local governments have and how limited resources can push day-to-day town needs above long-term resilience planning for climate change. We learned about these competing priorities in our C2R2 classes, but working directly with Atlantic Highlands made this pernicious issue real. This experience will prove invaluable as I pursue a career in marine policy.”

Working with Keansburg was very fulfilling for Ashlyn Spector, a master’s student in the graduate program in Earth and planetary sciences. “Being able to speak to community members about their ideas of what resilience is, what they view their community looking like in 10 to 20 years, and what they want—there is something about applying your personal knowledge to help other people.”

Sophia Blanc SGS’21, who was a master’s student in the graduate program in civil and environmental engineering, is another convert. “The C2R2 program helped me place engineering in the greater context of society by introducing me to people with roles that make society tick, some of which I would not have otherwise been aware of. Meeting individuals and learning about their work made it clear to me how the social, scientific, and engineering systems are coequal, interacting, and cannot be separated.”

Barr, Spector, and Blanc are among the seasoned C2R2 graduates who are inaugural members of the Climate Resilience Corps, a new collaboration among the New Jersey Climate Change Resource Center at Rutgers and state and local agencies. The corps, essentially a continuation of the mission of the C2R2 workshop, matches students with municipalities, helping officials with the flooding vulnerability assessment work required of communities to support their local hazard and resilience planning. It helps towns fulfill the provisions of a new law that requires municipalities to consider natural hazards as part of the land-use element of their master plans. It also could serve as the prototype of President Biden’s proposal to establish a civilian climate corps program—an idea that Kopp had proposed during a Rutgers-sponsored conference in June 2020 when he outlined how public universities could establish something similar.

“I am excited to participate in the Climate Resilience Corp,” says Sean Thatcher SGS’20, an alumnus of the graduate program in geography. “Now, I can apply my understanding of climate systems with municipalities that are preparing for a changing climate. It will be interesting to see how the planning process incorporates the science and community values to find a balance. I will be able to work with a diverse group of professionals in a meaningful way.”

The Climate Resilience Corps is part of the larger mission at the center, established by law in 2020 and codirected by Herb and Marjorie Kaplan, who is also the associate director of the Rutgers Climate Institute. “The center,” says Herb, “brings the expertise of the academic community to help inform decision-makers—whether at the state or the community level, or in the private sector or nonprofit organizations—to address climate change challenges in New Jersey.”

“Universities—particularly the land-grant universities like Rutgers with the resources—have a crucial role to play,” says Kopp, “bringing together the expertise of the scientific and research communities with stakeholders to ensure that we are doing the research that can actually inform solutions to their problems.”

Adam Hubeny, the Atlantic Highlands borough administrator, is a big fan of C2R2 and the contributions of the students. “The partnership with Rutgers was awesome because the students did all of this work and digging, and their final report brought it to a conclusion,” he says. And, Hubeny points out, the invaluable Rutgers service is free—no small consideration, given the budget constraints of less-affluent shore communities. As the word gets out about C2R2, he sees only good things for municipalities taking advantage of the program and its zealous students.

“People often ask me whether I am optimistic about our state’s future in light of changing climate conditions,” says Herb. “And my answer always is, ‘I am very optimistic.’ And that stems mostly from working with the type of students whom I have had the opportunity to work with through the Rutgers programs. They are dynamic, bright problem-solvers. They are committed to a healthy, safe, and resilient future for our state.”

This article originally appeared in the June 2021 issue of Rutgers Magazine and was written by David W. Major