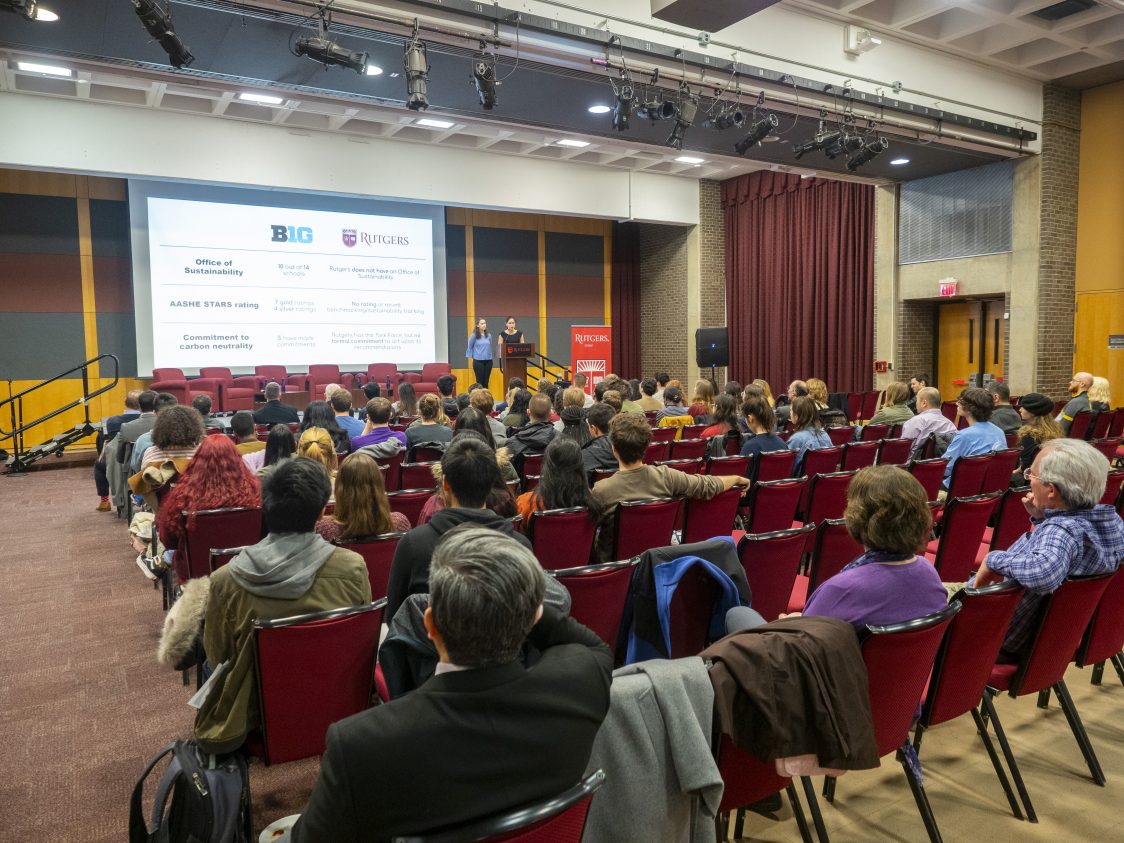 A vision of how Rutgers might reach sustainability began to take shape when administrators, students and members of the community came together for a Sustainability Town Hall last week.

More than 200 people gathered at the College Avenue Student Center to hear six panelists in an open forum about sustainability and the ravages of climate change. Because of the wide range of viewpoints and priorities in the room, the evening’s discussions ranged from the micro (student shuttles to supermarkets) to the macro (whether Rutgers needs to concentrate its efforts under a formal Office of Sustainability like many of its Big Ten counterparts).

Sustainability commonly refers to strategies for meeting the environmental, economic, and social needs of people today without compromising the ability of future generations to meet their needs. But a senior, Michelle Wong of the Sustainability Coalition and a moderator who delivered opening remarks, set the course of conversation for the evening by pointedly clarifying the definition. “There is often this misconception that sustainability is purely an environmental issue, but as the United Nations agenda for sustainable development illustrates, that’s not the case,” she said. “We have issues such as poverty, education, gender equality and economic development all intertwined and interdependent with sustainability.”

When the dialogue did switch to sustainability, the vibrant give-and-take between students and the panelists ranged from topics such as safety concerns for the proposed use of ebikes and scooters, disposal of medical waste and to whether the university is environmentally responsible in its investing. One student asked whether the university will allocate the necessary funds to the Task Force so RU can be a carbon-zero institution by 2030.

One extended dialogue occurred when the panel was asked why the university does not invest in a light rail system. The students were told there is a lack of federal funds for such a project. Furthermore, panelist Robert Kopp, director of the Institute of Earth, Ocean, and Atmospheric Sciences (EOAS) and co-chair of the President’s Task Force on Carbon Neutrality and Climate Resilience,said a $200 million price tag was not worth the environmental tradeoff since only 2% of carbon emissions come from campus buses and the money could better be used to offset the 98% derived from electricity or heating.

One aspect of sustainability that students seized upon was the importance of diversity and inclusion which they said should be considered an essential and a highly visible component in achieving sustainability. Many of their questions relating to diversity drew applause from the audience. One student said she had never had an African American teacher at Rutgers. Another expressed concern about the enrollment numbers for blacks and Hispanics and that they did not reflect all relevant communities.

These issues were addressed by panelist Antonio Calcado, executive vice president for Strategic Planning and Operations and chief operating officer, who said, “It’s just not acceptable in 2020. We have a lot of work to do. We need to make a firm commitment across the university that that’s where we are going. We are making strides—not fast enough. The strides are not long enough. And I for one am committed to help, using my position in making that happen.”

There were also questions about the racial makeup of the university’s Board of Governors and the President’s Task Force.

One of the moderators asked the panelists about their efforts to take diversity and inclusion into account within their scope of work and how they were going to make sure communities were being represented.

Using his own institute as an example, Kopp fielded the question, saying: “One of the shames of geosciences, environmental science, climate science is it is not a diverse field. The gender balance is okay but there is not a lot of minority representation. We are somewhat better at Rutgers because we have a more diverse student body and that is reflected in the field but that is not good enough.”

He said in Earth science, diversity was a priority in the institute’s strategic plan drawn up a few years ago, adding “We are putting effort into moving forward with that and trying to bring in a broader community as we move our institute into its second five years.”

Along with Kopp and Calcado, the panelists included Michael Kornitas, director of Sustainability and Energy and co-chair of the University Committee for Sustainability; Jack Molenaar, senior director of the Department of Transportation Services; Jhanvi Virani, Student Assembly Executive Board President; and Krishna Gotur, Sustainability Coalition president.

After the town hall Gotur commented, “My hope is that this event gave some of the administrators present a better idea of the current knowledge and interest amongst the student body. This, in turn, may result in the administration being more transparent in their decision-making process and spur them to make it easier for students to understand how the university is operating on the ground.”

Kopp explained that the students’ activism plays an important role in the road to sustainability. He said, “I think it is really important that the student body continues to be engaged. It’s always important in these things: just because a task force has been established doesn’t mean you stop putting pressure for things to happen.”