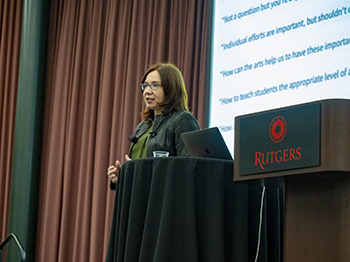 Can we convince climate deniers that climate change is real, caused by humans, happening now, and we need to find solutions? Atmospheric scientist Katharine Hayhoe told a Rutgers audience that we can – by engaging in conversations that are built upon shared values.

“Maybe Ms. Climate Genius can explain how we had an ice age despite no emissions,” someone once said to world-renowned atmospheric scientist Katharine Hayhoe. The only response she could think of, she joked, was simply to say, “It’s Mrs. Climate Genius, not Ms.”

Hayhoe, whose research, according to her bio, focuses on developing and applying high-resolution climate projections to evaluate the future impacts of climate change on human society and the natural environment, addressed the challenges many of us experience, in our intensely polarized society, when speaking about climate change to people who do not believe climate change is real and is impacting all of us now in many negative ways.

Leading the audience through the litany of typical excuses, or “smokescreens,” as she calls them – that she most often hears from climate deniers to justify their beliefs, she explained that the best way to speak to and reason with them, and convince them to act to save the planet, is by working to find common ground by discovering what you both share and value.

EOAS Director Robert Kopp introduced Hayhoe, explaining they first met through their work as IPCC co-authors. Kopp said she is known not only for her work as a climate scientist but also for her skills as an award-winning communicator. “Katharine translates information produced by climate scientists for the people making decisions,” Kopp said.

Hayhoe, who hosts a radio program called “Global Weirding with Katharine Hayhoe” which airs on KTTZ.org, explained that through this program she often hears people’s objections to climate science. By far, she said, the top rationalization for not believing in climate change is “it’s just a natural cycle.” Other smokescreens she’s heard are, “sea level lies,” “scientists are making it up,” and “the planet can’t be warming because it’s cold outside.”

This lack of understanding is not due to a lack of education or a lack of scientific understanding, Hayhoe said. Research indicates that people with the highest level of knowledge “are the most polarized. The smarter we are, the better we are at cherry picking facts to suit our opinions.”

“Can you live on a different planet depending on how you vote?” Hayhoe asked. Climate deniers, she said, tie their belief that climate change is not happening with their belief that the government wants to take away their freedom. Often, they believe climate change solutions will destroy the economy, impact their personal choices, lead to government-controlled solutions and unfair taxation. They fear the government will regulate their thermostats and tell them what cars to drive. They believe solutions pose an imminent threat to their way of life. “Have sympathy,” Hayhoe said. “If you believed that, would you care about climate change?”

“Action begins with a conversation,” Hayhoe said. “It’s rare that we do anything without talking about it first. We have to talk about these issues. But can we do this in a civil manner? How do we have these conversations?”

Hayhoe said we can have constructive conversations with all but one group – a group she calls the “dismissives.” “Their personal identity is built on a set of beliefs that reject the reality of changing climate – they see it as an attack on their identity. But these are only about 10% of the population. We have 90% left.”

There are many common values we share that can lead to respectful and constructive conversations about climate, Hayhoe said, explaining that one important value is faith. “It’s easiest to talk about it in your own faith-based community.” But there are many other options as well. Does the person like to go birding? Explain to him or her how climate change impacts bird distribution. Because climate change causes extreme weather events, it’s helpful to discuss it in terms of the place you both live, Hayhoe said. She explained that in Texas she finds common ground with others by talking about droughts that are stronger and longer, and the increasing number of 100-degree days.

Lastly, Hayhoe said. “We have to talk about solutions, solutions that are compatible with our values.” Suggestions Hayhoe mentioned we can discuss include how we can eat lower down the food chain, or use electric cars. We can talk about adaptation, such as in the Netherlands where they are building floating villages. There are energy solutions. In Texas, Hayhoe said, she talks about how wind and solar energy are growing every year, saving tax money because it’s cheaper than gas, and that Dallas has built a climate neutral airport. She talks about agriculture, such as new methods that are being developed to reduce methane emissions from cows by feeding them marine algae (seaweed). She broaches the subject by mentioning businesses that are saving money by going green, such as Walmart, which plans to go green by 2025.

Hayhoe also suggested going to drawdown.org, a website that lists 100 possible solutions to climate change. “Find out what the thing is that makes them excited,” Hayhoe said. “It can be technology, policy, conservation, food waste, eating differently.”

“Do you have something from tonight that you can go away with?” Hayhoe asked. “This lecture can be a conversation starter. Tell someone ‘Hey, guess what I heard last night?’ We have to find ideas we can share. We have to find ways to work together to act. . . find what people value and how they can change it to save the planet.”

To learn more about Hayhoe’s scientific research, click here to listen to a seminar she delivered at EOAS the morning of February 26 titled “High-Resolution Climate Projections: Connecting Global Change to Local Impacts.”