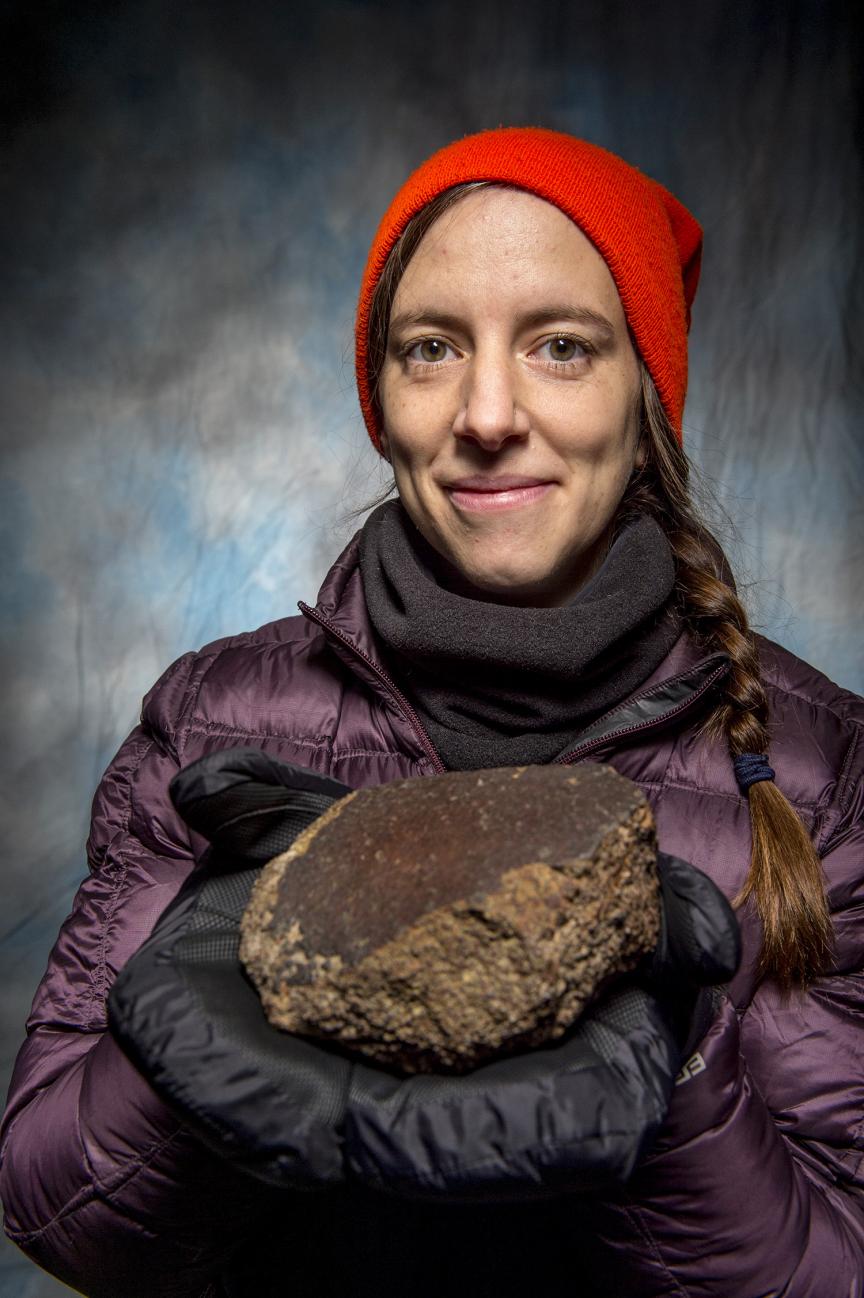 Gross received the award in recognition of the service she provides to the United States by conducting cutting-edge research in Antarctica.

The United States of America Secretary of Defense has awarded EOAS faculty member Juliane Gross the Antarctic Service Medal “in recognition of valuable contributions to exploration and scientific achievement under the United States Antarctic Program.”

Gross, an assistant professor in the Department of Earth and Planetary Sciences, Rutgers University-New Brunswick, spent over a month in Antarctica during 2017 and 2018 researching meteorite fragments.

Weather Underground reporters on WUTV recently asked Gross, “What is it that we can learn from what’s happening in Antarctica?” Gross said, “Actually, a lot. Meteorites fall all over the Earth, and most of them land in the ocean because Earth is covered by 70% water. Once they land in the ocean, we can’t use them anymore because they have been contaminated with Earth, so an area to find pristine meteorites, or planetary samples that haven’t been altered, are deserts. On earth we have hot deserts and cold deserts, and one of the cold deserts is in Antarctica.

“If you imagine a meteorite landing in Antarctica, it gets frozen in the ice shields directly, and then it gets protected from weathering. So the ice shield is kind of like a conveyor belt that flows from the surface towards the coast. So when we go to Antarctica, we actually fly out into the deep field, right on top of the continent, and then we go and search and recover these meteorites. From these meteorites we can learn all sorts of things from our solar system. From very primitive asteroid samples we can find, we can learn about other planets like Mars or the moon.”

Asked by the reporters what it’s like to conduct research under such harsh conditions, Gross said, “It is extremely cold there. When we were there during the Antarctic summer, the normal temperatures were between -20 and -40 and on really bad days, with windchill, we were at like -60 and that is not very much fun.”

In a WeatherGeeks  podcast titled “Hunting for Meteorites in the Antarctic” Gross describes her recent research in Antarctica in greater detail.

According to the United States Antarctic Program (USAP) website, the Antarctic Service Medal was created by  The 86th Congress Public Law 600 dated July 7, 1960, and was enacted to “provide for the presentation of a medal to persons who have served as members of a United States expedition to Antarctica.”

Describing the design of the award, the USAP site explains, “The ribbon of the Antarctica Service Medal is elaborate in its symbology. The outer bands of black and dark blue comprise five-twelfths of the ribbon’s width, representing five months of Antarctic darkness; the center portion, by its size and colors – grading from medium blue through light blue and pale blue to white – symbolizes seven months of solar illumination, and also the aurora australis. Although the former rigors and dangers of Antarctic exploration have largely been banished by technology, the words on the reverse of this medal are yet a wise injunction to those who go to the Antarctic: COURAGE, SACRIFICE, DEVOTION.”

The U.S. Air Force’s Personnel Center website explains that the “first recipients of this award were members of the U.S. Navy operation High Jump under the late Admiral R.E. Byrd in 1946 and 1947. Deserving civilians, including scientists and polar experts, can also be awarded this medal.”

Gross earned her Ph.D. in geosciences from Ruhr-University in Bochum, Germany. Between 2015 and 2017 Rutgers presented her with three awards: the “Preparation for Research Excellent Fellow” in 2015-2016; the Early Career Faculty Excellence Fellow in 2016, and in 2017 she was named a Chancellor’s Scholar.

Gross is currently on leave from Rutgers, working as assistant curator of the Apollo Moon Rock Collections at the NASA Johnson Space Center in Houston, Texas.