A record of a very deep (670 km) very large (magnitude 7.9) earthquake in Fiji on September 6, 2018 is captured by one of the GREAT Project instruments in Costa Rica.

The students are the first group of Rutgers University-New Brunswick undergraduates to participate in the three-year GREAT Project (The Geoscience REsearch At the Cordillera Talamanca (GREAT). They were led by Principal Investigator, EOAS faculty member and Professor in the Rutgers Department of Earth and Planetary Sciences Vadim Levin and co-PI Professor Charles Keeton of the Rutgers Physics Department.

In addition to living in Costa Rica, the students are also involved in the GREAT Project through a two-semester long research project under the online supervision of Costa Rican mentors.

“This is a special opportunity,” Levin said. “The students are fully supported, financially and logistically, for five weeks in a foreign country, and apprenticed to a major national research institution there. The students were able to experience what research is like, try it themselves, and get to see another country. For the Rutgers faculty, (me and Professor Keeton), we were able to do what professors do, that is – mentor potential future colleagues; in my case the project addresses a number of research questions I wanted to try answering for a long time. The ability (funding-wise) to share my favorite work with a younger generation is, generally, the most pleasant aspect of the trip (and the most frustrating, of course, when things don’t work well).”

The GREAT Project is funded by the National Science Foundation (NSF) program called IRES (International Research Experiences for Students) and administered by the Aresty Research Center at Rutgers. Aresty provides the infrastructure for recruiting, selecting and subsequently mentoring students who participate in the project. Levin, who is Aresty’s Faculty Director, said, “The Aresty program is invaluable. It allows the selected students to be a part of a university-wide community of undergraduate researchers.”

The student’s findings are contributed to a number of on-going projects there. “The data,” Levin explained, “are contributed to a number of different programs our colleagues conduct: the monitoring of the seismic activity (this is a fairly big deal in the country with a high seismic hazard), the progressive improvement of the regional map of the gravity field (needed for multiple purposes, from academic to purely engineering), the highly detailed surveys of the road network (an ongoing effort to build up infrastructure). All seismic data we collect there will be made public in a few years through a data center of the Incorporated Research Institutions for Seismology (IRIS).” 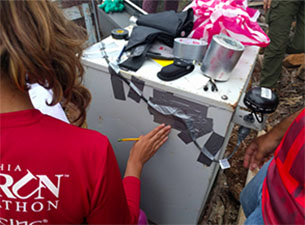 Rutgers geology major Mariya Galochkina works on the wiring of the seismic station in San Jeronimo, a small village to the south of Costa Rica capital San Jose.

There are several reasons why the Cordillera Talamanca is a great location to study and advance the students’ knowledge of field work, Levin said. “The region is magnificent in terms of scenery and exotic surroundings, and very interesting scientifically (these are very high mountains that rose in a geological time’s instant – 10 million years – for reasons not fully understood), and the infrastructure of both living there and working there is sufficiently well developed to make a five-week trip feasible from the point of view of actually getting something done by students with little prior preparation.”

Three of the six students did, however, go through a short but intense period of preparation prior to the trip. Together with Levin they traveled to the instrument center of the IRIS consortium in New Mexico to learn how to set up seismographs in the field. The instrument center maintains seismological equipment that is provided to NSF-funded research efforts like the GREAT project. Levin explained that prior training with the equipment is a requirement of the agreement to borrow the instruments.

While in Costa Rica, the students gathered a considerable amount of data over the five weeks.  They worked on all three GREAT research projects while there: landslide hazards, gravitational studies, and seismological studies. Each project has two students assigned to it, and they specialize according to their level of training and preferences.

The data the students collect in Costa Rica include, Levin said, “Observations of the strength of the gravity field, records of ground motion (seismograms), some basic observations of geological conditions (e.g. types of rock along the roads they try to help make hazard-proof), shape of the Earth’s surface (topography). Some require special instruments (gravimeters, seismometers, radar-equipped drones) that either belong to the University of Costa Rica or have been brought into the country by our project. For some things only the eyes are needed, and an ability to observe and take notes.” 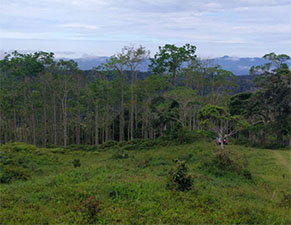 A view from the high-altitude tropical research station Las Alturas (where the GREAT project team has deployed a seismic station in early August of 2018).

The students encounter many challenges while collecting data, Levin said. “The key one being not having a clear set of plans and answers – for the undergraduates it is a big shock to discover that many things in real research activity are subject to improvisation, that conditions and circumstances change without warning (e.g. when rain destroys a road). Living for five weeks away from familiar conditions is hard, a language barrier is a complication for those who do not speak Spanish (this includes the PI).  Preparing for all this is complicated – you can talk about it a lot, and it only registers once experienced.”

The students had an intense experience, Levin said, “and on balance they found it positive, but also much more challenging than they expected (no matter how much they had been warned). It will be rewarding eventually, but as is any real work, it is also hard and at times frustrating.”

The most critical knowledge Levin and his co-PI strive to teach the students while there are varied. “I hope they build the confidence that they themselves can figure out things they have no prior experience with (e.g. cooking potatoes on a gas stove; measuring gravity while freezing on top of a high mountain while near the equator; taking two buses across a Central America city at rush hour),” Levin said.

Now back at Rutgers, the students will apply what they learned on the trip in the classroom and the lab. “Hopefully, Levin said, “the computer skills will come handy, the Spanish language skills will be enriching, and the confidence in their ability to solve the unfamiliar problems will be the key take-aways from the whole experience. It is even possible some of them may want to pursue careers as researchers – this will be a big overall win for the entire program.”

Applications for the summer 2019 GREAT Project trip to Costa Rica are being accepted now. The deadline to apply is November 1, 2018. Apply here.