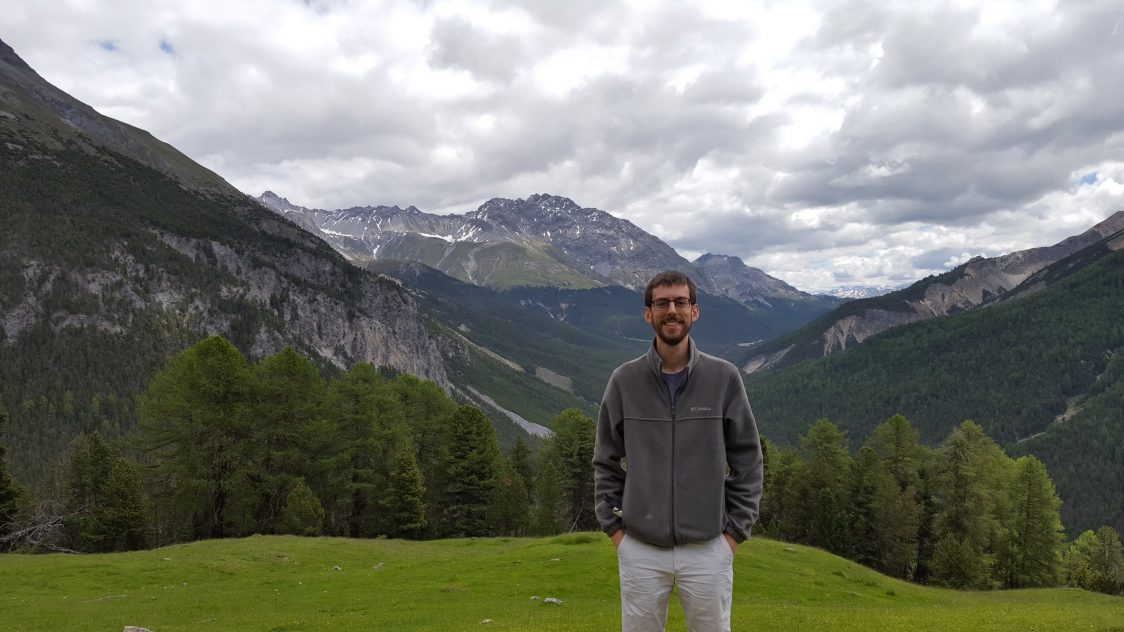 Kyle Mattingly, age 10, witnessed the tornado’s wrath at close range. Its fury made an indelible impression on the young Mattingly, now an EOAS postdoc associate and self-described weather geek.

“I have wanted to pursue a career in atmospheric science for as long as I can remember,” he said. “Growing up in western Kentucky I was captivated by the severe thunderstorms, tornadoes, floods, blizzards, and ice storms that affect that region.”

The intersection of weather and geography has been the focus of Mattingly’s academic career. He earned a bachelor’s degree from Western Kentucky University in meteorology; his master’s and Ph.D., from the University of Georgia, were in geography.  In his dissertation he addressed the effects of atmospheric moisture transport on the Greenland Ice Sheet. Scientists have been concerned for some time that global warming would melt the sheet, the second-largest in the world (Antarctica is the largest). There is enough frozen water in the Greenland Ice Sheet, according to Mattingly, to raise the average sea level globally by more than 24 feet. Although this catastrophic degree of change is not on the immediate horizon, the loss of ice mass has been accelerating since the mid-to-late 1990s.

Mattingly’s research received a big boost from his participation in the NASA Earth and Space Science Fellowship Program (2016–2019). With the federal funding, he was able to further his dissertation research, travel to scientific meetings, in scientific journals, and present his work at national and international conferences, including the inaugural International Atmospheric Rivers Conference in 2016 and the POLAR 2018 joint Arctic-Antarctic research meeting.

His ongoing research centers on the interactions among the Earth’s atmosphere, oceans and cryosphere that affect the Greenland Ice Sheet. Specifically, Mattingly has found that zones of intense water vapor that travel in the atmosphere (“atmospheric rivers”) cause major melting of the ice sheet during summers. Mattingly is looking into where the water vapor comes from and, preliminarily, it appears to be the middle latitudes of the North Atlantic and over North America before traveling to Greenland.

During the long winter break, Mattingly answered several questions about his work and life. A condensed version of his comments appears below:

What is your opinion of the worldwide youth activist movement supporting climate change?

I think that the increased interest in climate change, alongside growing awareness of its societal causes and consequences, is a good thing. As a scientist and educator, I feel that my task and that of my colleagues is to feed this hunger for information among young people. We should do our very best to understand the dramatic changes occurring in the climate system and their implications, and simultaneously communicate our findings to students and the broader public in a way that empowers them to develop their own understanding of these issues.

What are your duties/responsibilities as a postdoc at Rutgers?

My primary responsibility will be to continue developing a strong research program that utilizes the multidisciplinary perspective provided by EOAS to investigate the future evolution of the Greenland Ice Sheet and related questions. I plan to apply for external research funding to support these efforts and continue communicating my findings through professional and public channels, in collaboration with my EOAS faculty advising team — Åsa Rennermalm, David Robinson, and Anthony Broccoli — and other EOAS researchers.

What “professional service” are you currently participating in?

I am planning to get involved in outreach activities with K-12 students here in New Jersey. I recently co-organized a session on glacial and polar meteorology at the 2019 European Meteorology Society Annual Meeting, and I plan to help coordinate sessions at future scientific meetings. I have served as a manuscript reviewer for a number of scientific journals and consider this service an important aspect of participation in the scholarly community. I also serve as a member of the advisory committee for the meteorology program at Western Kentucky University, my undergraduate alma mater.

What was your best day on the job?

A day that immediately comes to mind is when I gave a talk at the 2016 American Association of Geographers annual meeting. I had recently begun my research on the effects of atmospheric moisture transport on the Greenland Ice Sheet, and it was the first time I was able to present this work to a scientific audience. There were a few senior scientists from other institutions who expressed interest in my research after the talk, which made me feel for the first time that the work I was doing could be helpful to the broader community.

Tell me something interesting about yourself that someone meeting you for the first time—or reading about you—might find surprising.

I am a devoted fan of Liverpool FC, the most successful team in English (soccer) history and current European and world club champion. Earlier this year I was able to go to a match at Anfield (their historic and world-renowned stadium) for the first time, which was a real bucket list experience.