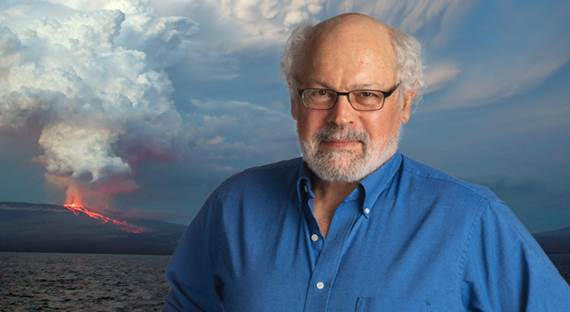 Alan Robock, a Distinguished Professor in the School of Environmental and Biological Sciences, has been guided by the idea that scientists can also teach students political values.

The Rutgers Climate Institute comprises more than 100 distinguished researchers representing 17 schools and programs in the natural and social sciences as well as the humanities. As observers of the natural world, they have been among the first to sound alarms about the potentially catastrophic impact of the earth’s changing climate – from rising sea levels and warming temperatures to severe drought and the proliferation of wildfires. They’ve testified before Congressional panels, received accolades from their peers and are frequently quoted in the news media. This article is part of our series about the Rutgers Climate Institute.

When he arrived as a graduate student at the Massachusetts Institute of Technology (MIT) in 1972, Alan Robock was surprised to find antiwar banners and bumper stickers attached to the office door of Jule Charney, a pioneering meteorologist and member of the MIT faculty.

Over the course of a 40-year career in which he’s explored many aspects of climate science and other issues related to human survival, Robock has taken heed of his mentor’s lesson.

“I’m a climatologist. I look at long-term change, not day-to-day change. In the long term, we’re going to solve the global warming problem.”

In the 1980s, he took part in an exchange of American and Soviet scientists working on nuclear weapons issues, a collaboration he believes convinced both superpowers to de-escalate their arms race. He’s done considerable research into the climatic effects of nuclear war, often referred to as the nuclear winter, which he considers “the most serious environmental threat faced by humans.”

More recently, Robock explored the humanitarian impact of nuclear war, from radiation and fire to agricultural calamity, on behalf of the International Campaign to Abolish Nuclear Weapons, which was awarded the Nobel Peace Prize in 2017.

Like many climate scientists, Robock expresses exasperation over politicians and others who discount the science behind human-induced climate change. “The solution to global warming is to completely change our source of energy by switching to solar and wind – some people argue nuclear – and to stop burning coal and oil and natural gas,” he says. “People make a lot of money selling that, and most decisions are based on economics.”

Yet he remains hopeful. “I’m a climatologist,” Robock says. “I look at long-term change, not day-to-day change. In the long term, we’re going to solve the global warming problem.”

Robock is one of two leaders of GeoMIP, an international alliance studying the climatic effects of human intervention to counteract climate change by reflecting some of the sun’s energy back into space, a theoretical process known as geoengineering. In 2009 testimony before the U.S. House Committee on Science, Space and Technology, Robock said only a “planetary emergency” would merit the use of geoengineering. “It is not a solution to global warming,” he said.

Three years ago, the American Meteorological Society honored Robock in part for his “fundamental contributions toward understanding the climatic effects of stratospheric aerosols from volcanoes and other potential sources.” That award was named for Jule Charney.

This story was written by Christopher Hann and originally appeared in Rutgers Today on February 5, 2019.