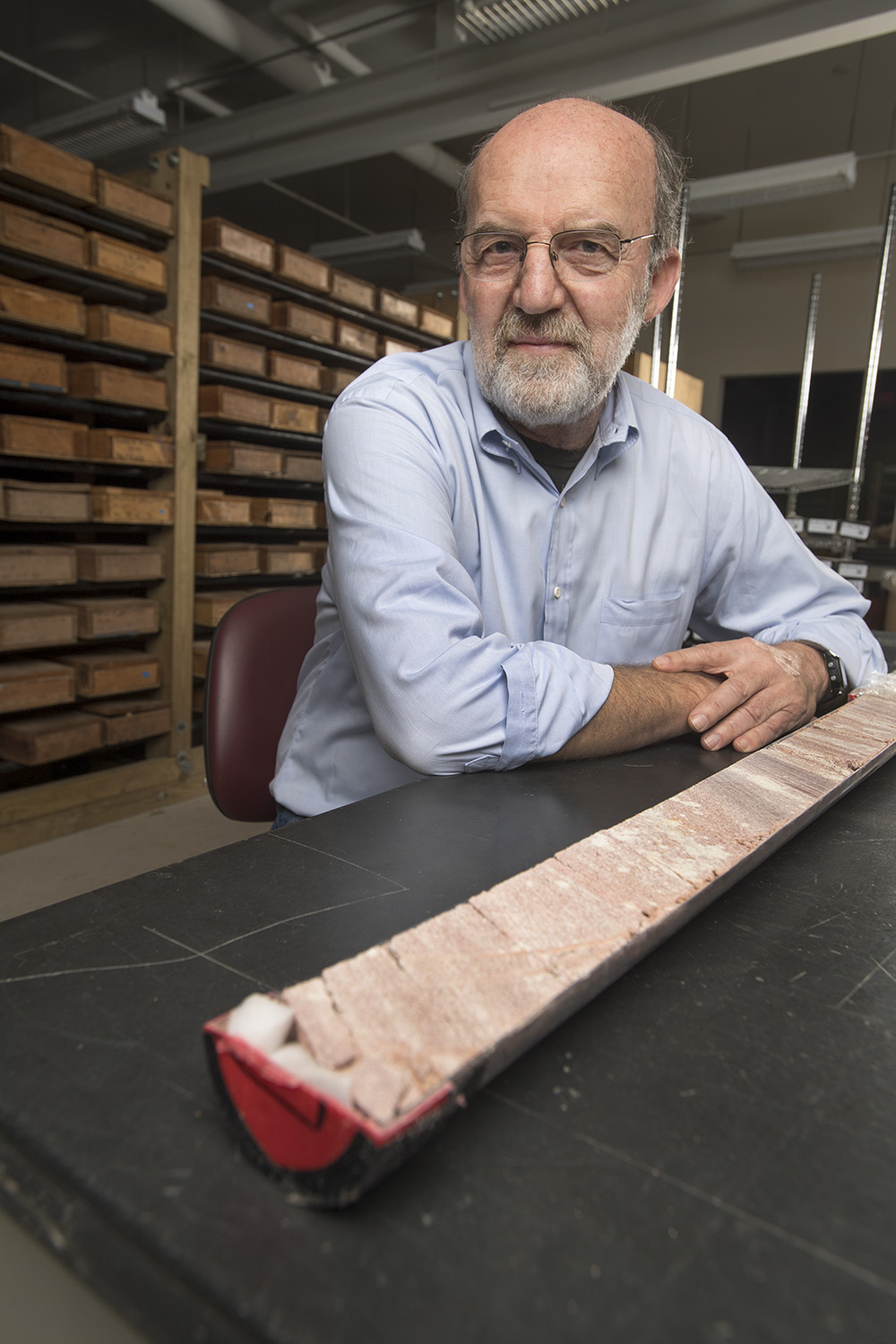 Rutgers University–New Brunswick Professor Dennis Kent with part of a 1,700-foot-long rock core through the Chinle Formation in Petrified Forest National Park in Arizona. The background includes boxed archives of cores from the Newark basin that were compared with the Arizona core.
Photo Credit: Nick Romanenko/Rutgers University

Every 405,000 years, gravitational tugs from Jupiter and Venus slightly elongate Earth’s orbit, an amazingly consistent pattern that has influenced our planet’s climate for at least 215 million years and allows scientists to more precisely date geological events like the spread of dinosaurs, according to a Rutgers-led study.

“It’s an astonishing result because this long cycle, which had been predicted from planetary motions through about 50 million years ago, has been confirmed through at least 215 million years ago,” said lead author Dennis V. Kent, a Board of Governors professor in the Department of Earth and Planetary Sciences at Rutgers University-New Brunswick. “Scientists can now link changes in the climate, environment, dinosaurs, mammals and fossils around the world to this 405,000-year cycle in a very precise way.”

The scientists linked reversals in the Earth’s magnetic field – when compasses point south instead of north and vice versa – to sediments with and without zircons (minerals with uranium that allow radioactive dating) as well as to climate cycles.

“The climate cycles are directly related to how the Earth orbits the sun and slight variations in sunlight reaching Earth lead to climate and ecological changes,” said Kent, who studies Earth’s magnetic field. “The Earth’s orbit changes from close to perfectly circular to about 5 percent elongated especially every 405,000 years.”

The scientists studied the long-term record of reversals in the Earth’s magnetic field in sediments in the Newark basin, a prehistoric lake that spanned most of New Jersey, and in sediments with volcanic detritus including zircons in the Chinle Formation in Petrified Forest National Park in Arizona. They collected a core of rock from the Triassic Period, some 202 million to 253 million years ago. The core is 2.5 inches in diameter and about 1,700 feet long, Kent said.

The results showed that the 405,000-year cycle is the most regular astronomical pattern linked to the Earth’s annual turn around the sun, he said.

Prior to this study, dates to accurately time when magnetic fields reversed were unavailable for 30 million years of the Late Triassic. That’s when dinosaurs and mammals appeared and the Pangea supercontinent broke up. The break-up led to the Atlantic Ocean forming, with the sea-floor spreading as the continents drifted apart, and a mass extinction event that affected dinosaurs at the end of that period, Kent said.

“Developing a very precise time-scale allows us to say something new about the fossils, including their differences and similarities in wide-ranging areas,” he said.

The study was conducted by National Science Foundation-funded scientists at Rutgers-New Brunswick; Lamont-Doherty Earth Observatory at Columbia University, where Kent is also an adjunct senior research scientist and where longtime research collaborator and co-author Paul E. Olsen works; and other institutions. Christopher J. Lepre, a lecturer in Rutgers’ Department of Earth and Planetary Sciences, and seven others co-authored the study, and the cores were sampled at the Rutgers Core Repository.

This article was originally written by Todd Bates and published by Rutgers Today on May 7, 2018.