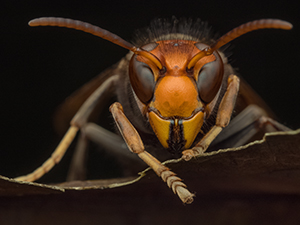 Asian giant hornets will swarm a honeybee hive with the purpose of decapitating thousands of bees and taking away their thoraxes to feed to the hornets’ young. On rare occasions, they will attack humans, sometimes fatally.

Stories this week in various media outlets, including the New York Times, about the Asian giant hornet, Vespa mandarinia, making its way to Washington state have many Americans wondering whether the insect could soon be spreading across the country.

Are these “murder hornets” coming to the Philadelphia region to kill local bees and, possibly, humans?

Not any time soon, if at all, experts say, and add that fears of the hornets are overblown.

The insect is also sometimes referred to as the Japanese giant hornet. Queens can grow to about two inches long. Workers are typically slightly smaller, but their size can increase into the fall to about the same size as queens. The hornets attack honeybees, and can wipe out a hive in hours by using their mandibles to rip off the heads.

They are also known to kill humans, with up to 50 victims a year in Japan dying after suffering painful stings.

The sightings in Washington mark the first time the bugs have been documented in the United States. Other than British Columbia, they have not been found anywhere else in North America, Michelle Infante-Casella, agricultural agent for Gloucester County with the Rutgers Cooperative Extension, wrote in an article published Wednesday by Rutgers University and also written by William Bamka, Extension agricultural agent for Burlington County.

Reached by email, she said the Asian giant hornets in Washington won’t suddenly fly thousands of miles east, across the Rocky Mountains, on their own. The threat is that they will be transported by vehicles. Infante-Casella said Washington state will need to inspect hives to make sure the pest is not present.

“So the concern is not the migration of the Asian giant hornet, but the inadvertent transport,” she said in the email.

In the article, Dina M. Fonseca, director of the Center for Vector Biology at Rutgers in New Brunswick, N.J., said, “It is important not to overreact. … We do not expect them on the East Coast.”

Reached by email, Fonseca said she takes exception to the term murder hornet, as they kill bees only to feed their colonies. She noted there has long been an invasive wasp on the East Coast, the European hornet, which arrived in the 1800s. But she said it never made it to the West Coast. The European hornet, however, is smaller than the Asian giant hornet, reaching up to one inch in length.

“Big invasive jumps are relatively rare, and almost without exception associated with human movement,” Fonseca said in the email.

The U.S. Department of Agriculture said the Asian giant hornet was first documented in the U.S. last Dec. 8 in Blaine, Wash., when a resident reported finding a large, dead hornet on his property. It was later identified as an Asian giant hornet by the Washington Department of Agriculture. A hornet had also been found on Vancouver Island, British Columbia, in September.

Three more potential sightings have been reported in Washington, with two reporting that honeybee colonies were attacked. Beekeepers said they started seeing a potential invasion in October.

The hornets have a black and dull-yellow/orange striped abdomen. They create nests in the ground, using hollow trees or rodent tunnels. They are a serious problem for honeybees, which are needed to pollinate flora. Their venom is highly toxic and they will attack humans if threatened.

The Asian giant hornet should not be confused with another large insect native to the East, the Cicada killer wasp (Sphecius speciosus). Cicada killers are found throughout the U.S. and burrow holes in the soil, but do not sting people. The males do not have stingers. The females have small ones that generally do not create a painful sting in humans.

Female wasps strike and stun cicadas, which react with a loud shrieking buzz until paralysis sets in due to the stinger. Cicada killer wasps can be seen dragging their prey up trees and plants.

Sarah Plonski, president of the Philadelphia Beekeepers Guild and a Germantown resident, called fears of the hornet overblown.

Plonski said only two specimens were found in Washington, not full colonies. In addition, she said, Asian giant hornets don’t exclusively attack honeybees, feeding on other insects too.

She believes it unlikely they will end up in the Philadelphia region. Rather, her concern is that people will use more insecticides, and worsen a years-long decrease in the honeybee population. While there are numerous causes of that decline, such as parasites and loss of habitat, insecticides are thought to be a significant factor, especially in agricultural applications.

“The human reaction,” Plonski said, “could be more dangerous than the hornet itself.”

This article has been updated to say worker Asian giant hornets can grow into the fall to about the same size as queens.