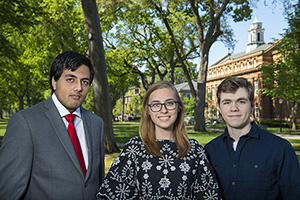 Mariya Galochkina wants to study the ancient roots of climate change. She is fascinated by how the Earth’s systems are so interconnected and wants to know more about how each has impacted the global climate.

“I want to study how ancient ocean currents and continent configurations impacted Earth’s climate throughout its history,” said Galochkina, a Rutgers University-New Brunswick Honors College junior who was among three undergraduates awarded 2019 Goldwater scholarships for their academic excellence. “Studying Earth’s past is necessary to better understand its present and future.”

This is the 14th consecutive year that a Rutgers–New Brunswick student was selected as a Goldwater scholar, a scholarship which honors the late Sen. Barry Goldwater and is designed to encourage outstanding students to pursue careers in mathematics and natural sciences and engineering.

The trio was selected to compete for the 2019 Goldwater scholarship from a pool of 1,223 students nominated by 442 colleges and universities throughout the country. The scholarship includes up to $7,500 a year for tuition, fees, books and room and board for up to two years.

The students credit motivation, dedication and passion for their academic success as well as professors who provide opportunities to learn with research scientists.

Gomes said even after finding inspiration from a high school teacher, John Paul Chou, a professor at Rutgers further sparked his love of physics.

“He gave me the opportunity and the resources I needed to approach my questions about the universe in a meaningful and scientific way and has played a very important role in my education as a physicist but especially as a research scientist,” he said.

Gambhir also credits his professors for encouraging his passion for research. While he admits physics can be a difficult discipline, he says, “the upscale is if you are truly passionate, what seems like work can actually become enjoyable, even if it takes a little investment.”

Arthur D. Casciato, director of Rutgers’ Office of Distinguished Fellowships, said he is excited for the three recipients this year.

“Even though this year’s candidate pool was an unusually rich one, our nominating committee reached easy and perfect consensus on Mariya, Brandon and Rikab,” Casciato said. “It’s very exciting to have our high opinion of these three marvelously talented young scientists confirmed by their selection as Goldwater scholars.”

This article was written by Cynthia Medina and originally appeared in Rutgers Today on May 14, 2019.