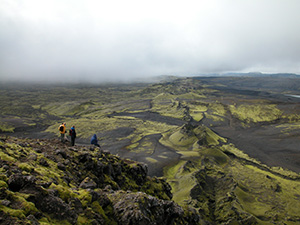 The Laki volcano in Iceland. It is not a typical mountain and its fissure to the right stretches into the distance.
Photo: Alan Robock/Rutgers University-New Brunswick

An enormous volcanic eruption on Iceland in 1783-84 did not cause an extreme summer heat wave in Europe. But, as Benjamin Franklin speculated, the eruption triggered an unusually cold winter, according to a Rutgers-led study.

The study, in the Journal of Geophysical Research: Atmospheres, will help improve predictions of how the climate will respond to future high-latitude volcanic eruptions.

The eight-month eruption of the Laki volcano, beginning in June 1783, was the largest high-latitude eruption in the last 1,000 years. It injected about six times as much sulfur dioxide into the upper atmosphere as the 1883 Krakatau or 1991 Pinatubo eruptions, according to co-author Alan Robock, a Distinguished Professor in the Department of Environmental Sciences at Rutgers University–New Brunswick.

The eruption coincided with unusual weather across Europe. The summer was unusually warm with July temperatures more than 5 degrees Fahrenheit above the norm, leading to societal disruption and failed harvests. The 1783–84 European winter was up to 5 degrees colder than average.

Franklin, the U.S. ambassador to France, speculated on the causes in a 1784 paper, the first publication in English on the potential impacts of a volcanic eruption on the climate.

To determine whether Franklin and other researchers were right, the Rutgers-led team performed 80 simulations with a state-of-the-art climate model from the National Center for Atmospheric Research. The computer model included weather during the eruption and compared the ensuing climate with and without the effects of the eruption.

“It turned out, to our surprise, that the warm summer was not caused by the eruption,” Robock said. “Instead, it was just natural variability in the climate system. It would have been even warmer without the eruption. The cold winter would be expected after such an eruption.”

The warm 1783 summer stemmed from unusually high pressure over Northern Europe that caused cold polar air to bypass the region, the study says. After the eruption, precipitation in Africa and Asia dropped substantially, causing widespread drought and famine. The eruption also increased the chances of El Niño, featuring unusually warm water in the tropical Pacific Ocean, in the next winter.

The eruption spawned a sulfuric aerosol cloud – called the “Laki haze” – that lingered over most of the Northern Hemisphere in 1783. Reports from across Europe included lower visibility and the smell of sulfur or hydrogen sulfide. The air pollution was linked to reports of headaches, respiratory issues and asthma attacks, along with acid rain damage to trees and crops, the study notes. 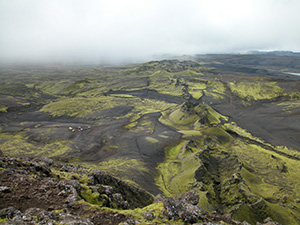 More than 60 percent of Iceland’s livestock died within a year, and about 20 percent of the people died in a famine. Reports of increased death rates and/or respiratory disorders crisscrossed Europe.

“Understanding the causes of these climate anomalies is important not only for historical purposes, but also for understanding and predicting possible climate responses to future high-latitude volcanic eruptions,” Robock said. “Our work tells us that even with a large eruption like Laki, it will be impossible to predict very local climate impacts because of the chaotic nature of the atmosphere.”

Scientists continue to work on the potential impacts of volcanic eruptions on people through the Volcanic Impacts on Climate and Society project. The Laki eruption will be included in their research. Volcanic eruptions can have global climate impacts lasting several years.

The study’s lead author is Brian Zambri, a former post-doctoral associate who earned his doctorate at Rutgers and is now at the Massachusetts Institute of Technology. Scientists at the National Center for Atmospheric Research and University of Cambridge contributed to the study.

This article originally appeared in Rutgers Today on May 14, 2019.