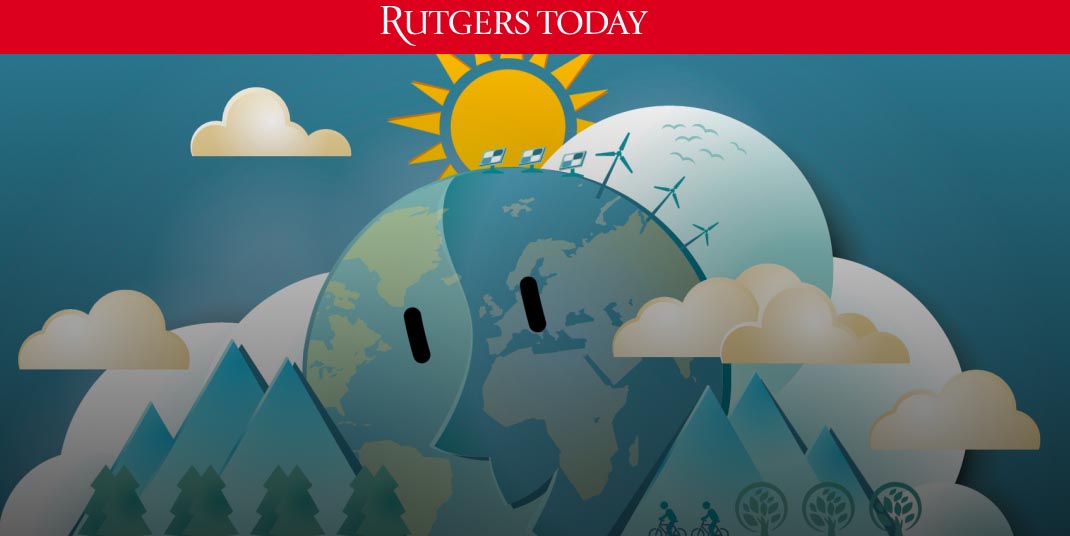 Amid an extraordinary year altered by the coronavirus pandemic, work continues at Rutgers University to address another ongoing crisis with dire consequences: climate change. Following the release of an interim report, the President’s Task Force on Carbon Neutrality and Climate Resilience is continuing its work on a comprehensive climate action plan for the university.

As the task force develops Rutgers’ strategies for contributing to achieving global net-zero carbon dioxide emissions and for enhancing the university’s and New Jersey’s capacity to manage the risks of a changing climate, members of the Rutgers community are invited to attend virtual town hall meetings on Nov. 11 and Nov. 12 from 6 p.m. to 8 p.m. The Nov. 11 town hall will focus on “Envisioning a Carbon Neutral Rutgers” and Nov. 12 on “Envisioning a Climate Resilient Rutgers.”

We talked with task force co-chairs Robert Kopp and Kevin Lyons about what it means for Rutgers to become carbon neutral and climate resilient, why you should attend the upcoming town halls and what’s next for the task force.

What does it mean to be carbon neutral and climate resilient and what is Rutgers doing to move toward these goals?

It’s of course much easier to make a university carbon neutral than it is to make the world carbon neutral. Still, it’s not an easy task. The President’s Task Force on Carbon Neutrality and Climate Resilience is developing a strategy for eliminating emissions from our electricity, heating and on-campus transit. It also will examine how to reduce or compensate for the emissions represented by off-campus activities, including those embodied in the food we eat, the products we purchase and the commuting and business travel our students and staff engage in.

Given the fact that climate change is already happening, we must increase our climate resilience by understanding how well Rutgers fares in the face of climate-related extreme events like hurricanes, which are projected to become more intense over the coming decades and how the university prepares for the future.

Rutgers, an academic leader in this area, is already engaged in many activities that advance the goals of carbon neutrality and climate resilience. The report that we will release in November describes these activities in greater detail. The purpose of the climate task force is to develop a climate action plan that will lay out specific, achievable objectives that place us on a path toward carbon neutrality and increased resilience and help the world and the state of New Jersey move in the same direction.

What does the President’s Task Force on Carbon Neutrality and Climate Resilience hope to accomplish by hosting these virtual town halls?

Lyons: The purpose of the town halls we are holding throughout this project is to keep the Rutgers community engaged in the process of developing a climate action plan and be sure that we are listening to what Rutgers students, faculty and staff have to say.

We have three specific aims for the town hall meetings in November. First, the climate task force will present highlights from the Phase 2 report, which is comprised of sectoral analyses conducted over the summer by the seven working groups. Second, provide a forum for people to ask questions of the task force through moderated panel discussions. Finally, and perhaps most excitingly, offer an opportunity for Rutgers to come together as a community and imagine what a carbon neutral, climate resilient university could look like. A benefit of the virtual format is that we do not have to separate the town halls by campus. This means that the breakout visioning sessions will have people from across all Rutgers campuses in conversation with each other.

People sometimes don’t get involved until an issue affects them personally. How is climate change already affecting New Jerseyans?

Lyons: Climate change is absolutely affecting New Jersey residents right now. As stated in our pre-planning report, “Sea-level rise associated with global warming is responsible for about 70 percent of tidal flooding along the Jersey Shore, and in the absence of global sea-level rise, Hurricane Sandy would have flooded about 38,000 fewer New Jerseyans. A warmer atmosphere is increasing the frequency of intense rainfall events, such as those New Jersey experienced during Hurricanes Floyd and Irene. Heat waves are becoming more intense and frequent, causing deleterious impacts on human health.” Our cities’ air quality has also deteriorated due to climate change. Changes in climate, and increasing concentrations of atmospheric carbon dioxide, are expected to contribute to increasing levels of some airborne allergens and associated increases in asthma episodes and other allergic illnesses.

It can sometimes be difficult for people to connect their personal experiences with climate change if they are not looking at the data the same way as researchers. That is why communication is an important part of climate action.

What is next for the climate task force and Rutgers?

Kopp: In the next phase of work, the task force will draw upon the working groups’ analyses to develop a set of scenarios for climate action at Rutgers. These scenarios will be defined both by different combinations of underlying climate solutions and different assumptions about the near-term fiscal situation of the university. We will consider scenarios with different levels of ambition – do we aim to get to carbon neutral by 2050? By 2040? By 2030? What are the relative benefits and costs of each? With respect to fiscal impacts, we will consider scenarios of fiscal austerity, scenarios in which substantial stimulus funding is available for shovel-ready projects, and scenarios reflecting Rutgers’ pre-COVID fiscal situation.

The alternative scenarios will be released in a report for public comment in early 2021, followed by another round of town hall meetings. The task force will then develop a climate action plan to present to President Holloway and the Board of Governors and Board of Trustees in June 2021.

Robert Kopp is a professor in the Department of Earth and Planetary Science at the School of Arts and Sciences at Rutgers University-New Brunswick and director of the Rutgers Institute of Earth, Ocean and Atmospheric Sciences. Kevin Lyons is an associate professor of professional practice at Rutgers Business School-Newark and New Brunswick and associate director of the Rutgers Energy Institute.

Written by Kevin Lorincz, this article originally ran in Rutgers Today on October 30, 2020.