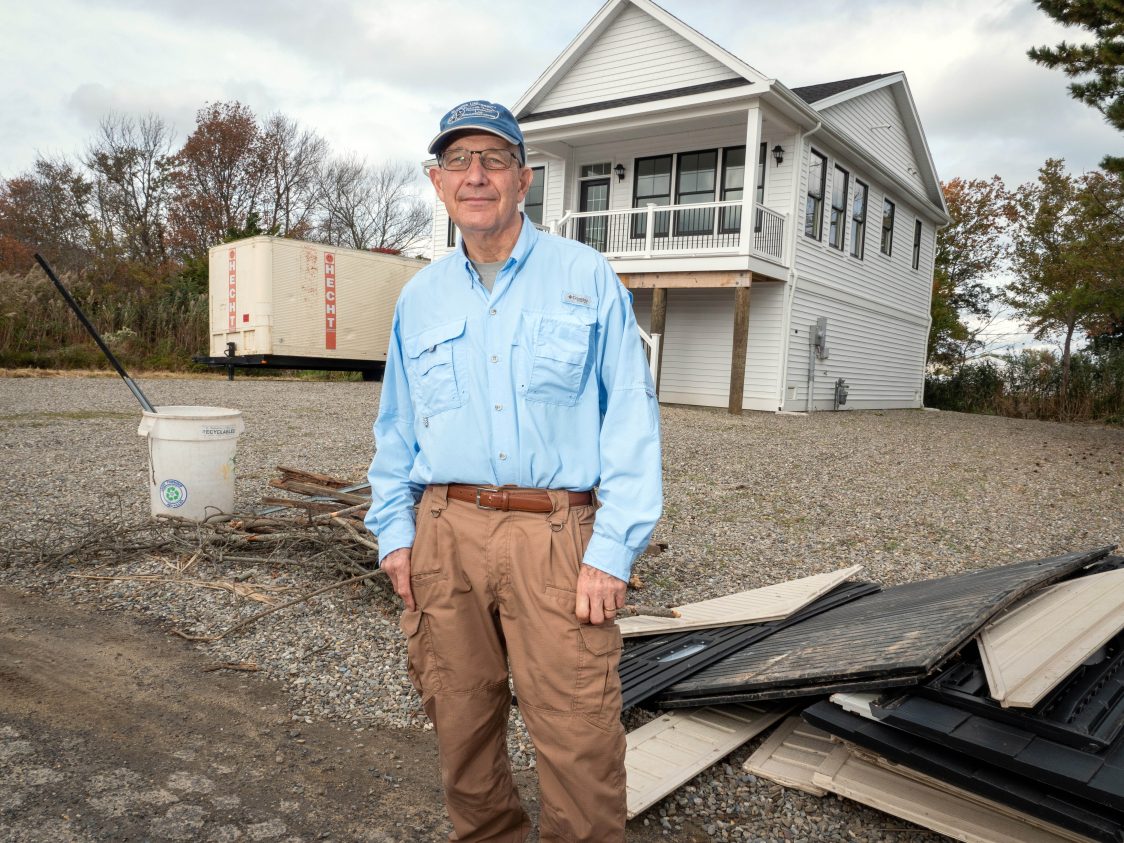 Whether to buy or build a home at the Jersey Shore has become more complicated and personal for Kenneth Miller – a Rutgers expert in sea level change and global warming – since Superstorm Sandy struck New Jersey’s seaside communities a decade ago.

“Superstorm Sandy was the fourth 100-year storm we weathered at the Jersey Shore since 1991,” said Miller, a Distinguished Professor in the Rutgers Department of Earth and Planetary Sciences, who lived in the coastal community of Waretown, New Jersey, until 2015.

Miller and his team have published sobering findings about sea level change in New Jersey, noting that the state needs to plan for at least a 3-foot sea level rise by 2100 – three times the rise in the past 50 years.

The findings were reinforced in the 2019 New Jersey Science and Technical Advisory Panel (STAP) report New Jersey’s Rising Seas and Changing Coastal Storms, and discussed in Miller’s Rutgers School of Arts and Sciences signature course, “Sea Change: The Rise and Fall of Sea Level and the Jersey Shore,” which he has offered since 2007.

“There has been a sea change – if you will – of students’ attitudes since the course was first introduced,” Miller said. “In the beginning, they were skeptical about climate change. Today, 95 percent understand this is a problem caused by carbon dioxide and other greenhouse gasses and want to do something about it.”

Miller said climate change is causing global sea levels to rise at an accelerated pace while the land sinks because of the Earth’s natural movements. Meanwhile, more frequent, severe storm surges such as Sandy can cause sea levels to swell even higher, flooding communities, eroding beaches and destroying marshlands in their wake.

While the number of storms might not be increasing, they are becoming more severe, with once-in-a-lifetime storms such as Sandy that cause storm surges becoming more frequent, Miller said.

Since Sandy, shore communities have focused on replenishing the dunes and widening the beaches, which is the best defense. However, Miller – who offers a lecture “Shall I Sell My House at the Jersey Shore?” – said he is disappointed in how slow funding has been for rebuilding.

“A decade later, some areas still have not been rebuilt, and places like Seaside do not have effective dunes to protect the beach,” he said. “The general attitude has been business-as-usual. We must assess the economic benefits of preserving development and making communities more resilient.”

Although the New Jersey Department of Environmental Protection’s standards for rebuilding are higher than the federal level, they are still too low and don’t take into account sea level rise, Miller said.

“A 1-foot increase in elevation might make a difference: My brother-in-law’s decision to build to 11 feet – 1 foot above the required level – saved his house,” Miller said.

His findings that the sea levels off the New Jersey coast will rise 3 feet by the turn of the century are based on the assumption that we monitor and control emissions. If we continue business as usual, however, we can expect 4 feet or more, Miller said.

“There is 5 percent chance that sea levels will even rise over 6 feet by 2100,” he said. “Should that be considered the standard we apply to structures we design for the next century?”

Assessing Inequities in Shore Communities: Who Stays and Who Leaves?

“New Jersey is trying to be forward-looking with their climate adaptation planning, but more work needs to be done on how we implement social justice in the distribution of federal resources for hazard mitigation and resiliency projects,” said Laura Geronimo, a doctoral student at the Edward J. Bloustein School of Planning and Public Policy at Rutgers.

“When assessing communities for mitigation, FEMA is using cost-benefit analysis (CBA) as a major criterion, which tends to concentrate buyouts in communities where there are lower-value properties, which also tend to be places where there are higher proportions of socially vulnerable populations. Post-Sandy, buyouts were concentrated in places like Woodbridge and Sayreville. Meanwhile, CBA makes it more cost-effective to elevate higher value properties, concentrating elevations in wealthier communities like Toms River and Brick Township,” Geronimo said.

According to Geronimo, elevations may be related to climate gentrification: Elevations tend to enhance property values, and when people elevate they also tend to build back bigger. Conversely, communities where buyouts are implemented may have difficulty finding alternative housing options. Understanding the social equity impacts of buyouts is complex, because this may be the preferred strategy among groups tired of living in the floodplain.

“There should be a continuum of care to not fracture these communities, with assistance in finding affordable alternative housing in desirable and safe locations,” she said.

It’s important to engage communities and understand what people value about a place that keeps them in the flood plain – such as proximity to the ocean or family histories – and their perception of risk, Geronimo said.

In Waretown, a working-class community on the mainland side of Barnegat Bay, Miller said he has seen residents struggle for years to rebuild – if they were even able to.

“The resources were not there, so many people couldn’t do anything, which was truly heartbreaking,” he said. “And the people who reside on the barrier islands live on a threatened sand of time. The community can be maintained through intense beach replenishment or nourishment and by building sea walls, but by 2100, we will be looking at a fundamentally different New Jersey shoreline.”

Federal flood insurance allows people to rebuild in these hazardous zones – a policy that Miller said should be re-examined. A question emerges: Should houses in harm’s way be allowed to be rebuilt again and again at taxpayer expense? Even with federal subsidies, insurance rates continue to rise. According to FEMA, more than 12,000 New Jersey policyholders have let their flood insurance lapse, leaving them vulnerable to the next storm.

Geronimo said she questions the long-term sustainability of elevating buildings if there is an uncertainty about how the supporting infrastructure will be maintained.

“What happens to communities when road networks, electrical grids and sewer lines are inundated?” she said.

For Miller, the tipping point for selling came when he grew weary from the battle against Mother Nature for a shore home he visited infrequently. While he misses the community he left behind, Miller said he has an appreciation for those who remained.

“For many people at the shore, the fight against nature is well worth it, but they need to be financially committed, have proper insurance, elevate their house to at least 12 feet and be prepared to evacuate,” he said. “While those measures should be good for them for maybe 20 years, it won’t be enough for their grandkids. They won’t be able to inherit those homes.”

“We can’t predict the future. It’s all luck,” Miller said. “We’ve been lucky for 10 years. Will we be lucky for another 10? We are rolling loaded climate dice for more extreme weather events – and at some point, our luck will run out.”