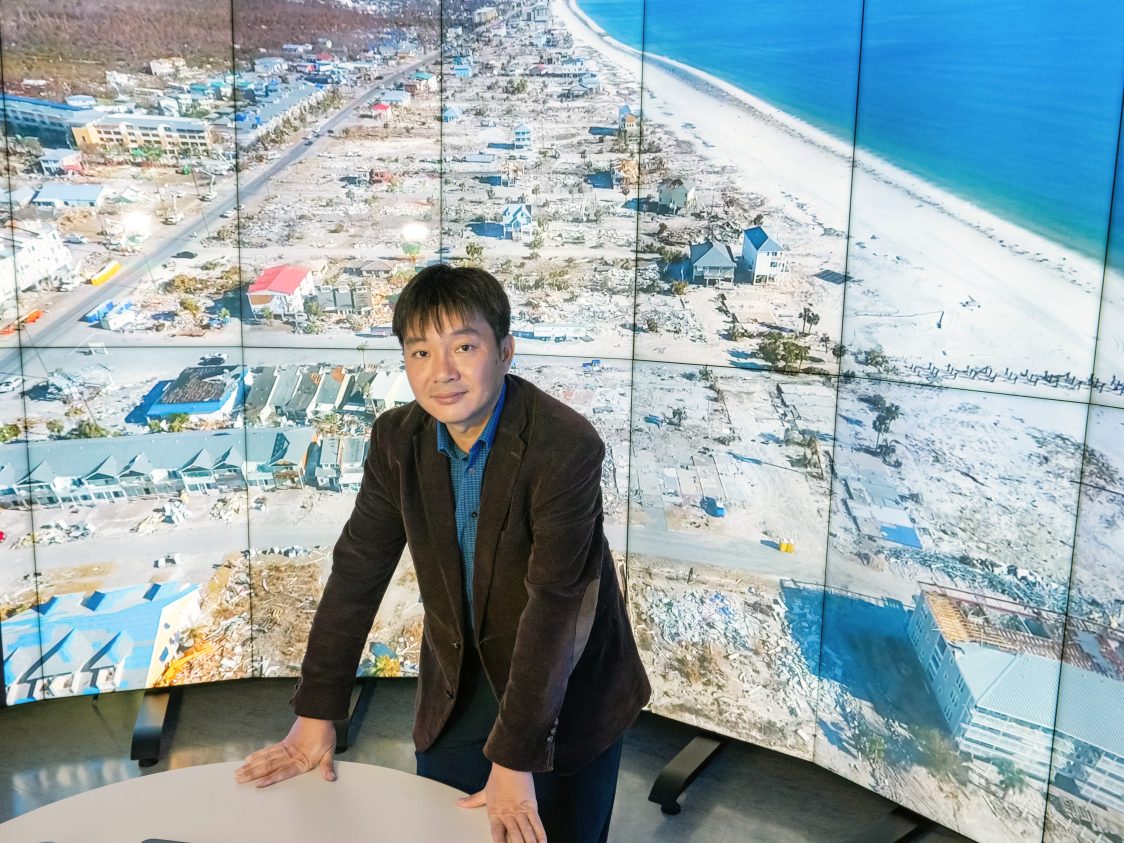 A professor of engineering leads an effort to digitalize New Jersey communities to predict flooding and gauge storm damage risk.

The forecast calls for a foot of rain. Floodwater will submerge roads and ruin structures. The question is which roads and structures.

While flood maps have provided some answers, surveys are laborious and expensive, so they rarely have all the data needed. Surveyors fix a few point elevations and estimate the rest. Updates are infrequent. Structural elements are generally ignored.

When Superstorm Sandy hit a decade ago, these limitations cost New Jersey billions of dollars. Forecasters warned of record flooding, but predictions lacked the detail needed for house-by-house decisions about moving cars to high ground or carting heirlooms upstairs.

As receding floodwaters revealed catastrophic and, in some instances, avoidable damage, Jie Gong, a Rutgers engineering professor, imagined a better way to predict flooding and other threats to infrastructure and buildings.

“The idea was to capture accurate elevation data for everything within the 500-year flood plain,” Gong said. “Every foot of roadway, every window, every front door, an accurate 3D model of reality. Combine that with good rainfall data, hydrological modeling and a lot of computing power, and you know where the water will reach on every building.”

Gong and his research team sent an ambitious proposal to Trenton, where it received an enthusiastic welcome and enough funding to get underway. The team has since mapped elevation data on more than ten thousand miles of roadways and all the homes along these roadways.

In years past, Gong’s plan would have required an army of surveyors. But by 2013, it only required a single modified van with advanced optical sensing instruments.

The van resembles a poorly disguised surveillance vehicle from a spy movie, the generic white delivery truck with several telltale antennas that the heroes spot immediately. A black, basketball-sized camera sits atop a three-foot pole on the roof, just behind the antennas and some other bits of white metal.

LIDAR, an acronym for laser imaging, detection and ranging, creates three-dimensional maps by bombarding its surroundings with lasers and noting how long it takes the lasers to bounce back from different locations.

The hardware inside the van combines this time data with LIDAR sensing, geographical information system mapping and conventional digital imaging. It all works fast enough that the vehicle can move through towns at normal traffic speeds.

Back in the lab, software integrates information from the van with satellite images, open-source street maps and other data to create precisely georeferenced 3D data of both the natural landscape and the built objects on it.

Advanced machine learning tools developed by Gong’s team analyze these 3D data automatically to extract elevation information for key building structure elements and create city-scale building models for flood exposure analysis. These models are accessible online so that users can overlay historical flood data or flood predictions onto them, and the system can tell you what was or will be underwater at any given time.

Gong illustrated this by calling up a model of Manville Borough, which sustained heavy damage from Hurricane Ida. The model contains hundreds of Manville buildings and the roads that connect them — all with precise structure elevation data. An Ida simulation shows exactly how flood waters surged and receded at individual properties during the storm and how many homes lost access to emergency services such as firefighter and ambulance runs due to impassable roads.

Gong’s team has also worked with NJ Transit to create an automated flood warning system for the Hoboken train station and the adjoining rail yard. Each update to tide and weather forecasts generates a new simulation to gauge flood risk. If the simulation predicts a flood within 96 hours, the system warns NJ Transit.

“Forecasting has a lot of uncertainties, so we allow users to add various safety factors, just in case the forecasters underestimate,” Gong said.

Once Gong’s team maps all the New Jersey roadway within the 500-year flood plain, they will need to update the data periodically, just like Google Street View cars sweep through a neighborhood every few years. The LIDAR data will need updates for the same reasons conventional flood maps do. Ground elevations constantly change, and new buildings alter the routes that floodwater will take.

The potential applications for Gong’s 3D models are numerous. For example, data on exactly how much the ground under particular stretches of roadway settle over time can help identify which buried pipes are in danger of rupture so service providers can make adjustments before problems occur.

Flood-related applications are particularly abundant because many such issues hinge on three variables: water volume, time and elevation. The rest is just physics-based modeling and a massive amount of calculation.

The model data allows the system to rank every individual house in an entire town — or the entire 500-year flood plain — by flood risk. This allows the town, state or federal government to determine precisely where to direct flood-mitigation efforts ranging from levy construction to house raising.

Even thinking just about advanced flood warning, potential uses for the system are numerous. Gong said he hopes NJ Transit will approve early warning systems for all its low-lying tracks and facilities, including the Meadowlands train yard where much of its rolling stock flooded during Sandy. Alert systems also could warn flood-prone towns or individual property owners within those towns.

“It would certainly be possible to expand the system to the point of sending a text or email to every person whose house was at risk of flooding, telling them to expect water in the basement but none on the first floor,” Gong said. “That would reduce the damage the next time a major storm rolls through.”