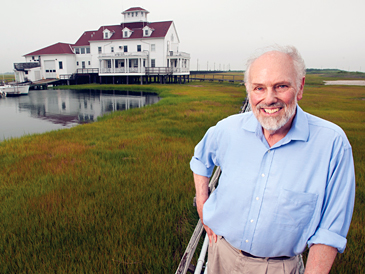 It was a profound shock for Rutgers to learn that Fred Grassle had passed away. Fred was our leader, mentor, partner in adventures at sea, and most of all a great friend.  At marine sciences we have always called the marine science building the “home that Fred built”, and it is a home thanks to his warmth and generosity.  Without him and Judy, there would be no modern oceanography program at Rutgers.  Fred has touched countless people, and despite leading international global programs was always freely giving of his time.  Speaking for myself, he was one of my role models for being a scientist and more importantly being a good person.  This a loss for the world.  Our thoughts and prayers go out to Judy and their family.

Fred was extremely humble despite being one of the most decorated oceanographers in history.  He did his undergraduate studies at Yale University and graduate training at Duke University. After a Fulbright Fellowship at the University of Queensland he joined Woods Hole Oceanographic Institution conducting deep-sea research on soft-sediment and hydrothermal vent communities. Rutgers was able to convince Fred to come to New Jersey in late 1980’s and he was the founding Director of Institute of Marine and Coastal Sciences.  He built a thriving community while maintaining his own research.  He was one of the originators of the international Census of Marine Life and installed the first science-dedicated electro-optical cable at Tuckerton which arguably was a catalyst for the modern ocean observing networks that are being built globally.  Scientifically, he was a pioneer leading to our understanding of the unique vent ecosystems near volcanic vents at the sea floor.  The discovery of these unique ecosystems were the first ecosystems found to be fueled by chemical energy from the Earth’s interior instead of sunlight.  He was honored by many awards including the Benjamin Franklin Medal, the Japan Prize, and the ASLO Lifetime Achievement Award.

Fred was a huge force in our lives that will not be filled. He will be missed and we are all profoundly sad.

Over the past week, I spent many quiet moments reflecting upon various aspects of the life of J. Frederick Grassle.

Fred was one of the true giants in the field of biological oceanography.  My first encounter with this gentle giant was during the first biological expedition to deep-sea hydrothermal vents in 1979 on which Fred served as Chief Scientist.  During this magical journey, each of the foremost authorities in their respective biological oceanographic fields ferociously vied for the few available precious dives in the submersible DSV Alvin.  On December 3, 1979, instead of assigning one of his esteemed colleagues, Fred put down in Alvin a young post-doc and my life has never been the same since that day.  As my father often remarked, the character of a man can be judged by how he treats those who can do nothing for him – and that young, wide-eyed post-doc on that magical mystery tour could certainly do nothing for Fred.  I went down on that priceless journey to the bottom of the ocean with Howard Sanders – a National Academy member and father of the time-stability hypothesis concerning factors maintaining deep-sea benthic diversity… quite the tour guide for one’s first dive into the abyss.

Eight years after that memorable dive, I had the privilege of chairing the Planning and Search Committee for a new Rutgers Institute of Marine and Coastal Sciences and its director.  During the search process we received a letter from Howard Sanders addressed to our Executive Vice President T. Alexander Pond who, as all of us at the University at the time knew, literally called all of the shots.  That letter was regarding J. Frederick Grassle, who Howard learned had been talked into applying for the Institute Director’s position.  Without going into the specifics of the letter, let me simply say that the letter was extremely curt, bordering on irate, and stated in no uncertain terms to Alec Pond: “Don’t you dare steal this man away from Woods Hole unless you are unconditionally committed to creating one of the finest marine science programs in the country”.

How fortunate for us associated with IMCS and DMCS to have had at our helm for so many years a rare soul who devoted his life to creating and growing a scientific crown jewel … and, more importantly, nurturing everyone and everything around him …. Fred, as you rest in peace, we thank you for all you did for the Institute of Marine and Coastal Sciences, for the Department of Marine and Coastal Sciences, for Rutgers University and for us your friends and colleagues.