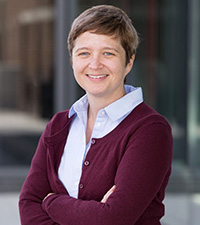 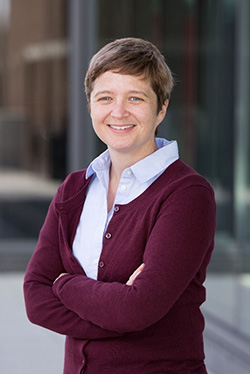 Assistant Professor in the Department of Environmental Sciences and a Rutgers Institute of Earth, Ocean and Atmospheric Sciences (EOAS) faculty member Katherine Dawson, along with other co-authors, received a Proceedings of the National Academy of Sciences of the United States of America (PNAS) award for a recent paper.

The team received the PNAS 2018 Cozzarelli Prize for their paper titled, “A Methyl-Compound Use and Slow Growth Characterize Microbial Life in 2-km-deep Subseafloor Coal and Shale Beds.” According to the PNAS website, the Cozzarelli Prize is an annual award that “acknowledges papers that reflect scientific excellence and originality.” The award is given to six papers published in PNAS each year.

Dawson’s research primarily focuses on the interaction between microorganisms and the environment that surrounds them, and the footprints that microbes leave behind in the geological record. Rutgers’ EOAS spoke with her recently to better understand her work and the inspiration behind it.

How would you explain the goals of your current research to someone with little knowledge of microbiology?

Currently, I’m working on projects that look at the way microbial communities process organic carbon in sediments. Carbon is cycled through the atmosphere, rivers, oceans, and rocks by both biological and non-biological processes. This cycle, in combination with other element cycles, impacts greenhouse gas concentrations and nutrient availability in our soils and oceans. Understanding the way microbial organisms convert organic carbon into carbon dioxide and methane in the deep sea and in coastal settings is important for both predicting future changes in the carbon cycle and for potentially harnessing microbial processes to promote carbon sequestration or pollutant breakdown.

Are you conducting research in local waterways?

This summer, my lab has been studying the microbial communities in the sediments of the Raritan River between the bay and New Brunswick. We’re hoping to identify changes in these communities as we move between fresh and salt water, and then will use these findings to promote future investigations of coastal river systems as sea level rises.

I’ve had an interest in how the natural world works for as long as I can remember. Early in my college career I took a course on ecology with a focus on co-evolution, syntrophy, and other associations in communities. While I spent most of the rest of my undergraduate career in chemistry labs, those stories and concepts stuck with me and then reappeared as I shifted from chemistry to biogeochemistry as a graduate student, postdoctoral scholar, and now assistant professor. While we as a scientific community keep learning more about microbial diversity in environments from the human gut to hydrothermal vents, there’s still so much more to discover. In a changing world, and potentially some day in extraplanetary locations, that’s not likely to change. The opportunity for new discoveries keeps me motivated.

What is your greatest achievement in terms of your research?

Much of my research to date has revolved around expanding the breadth of analytical measurements that we can routinely apply to environmental and laboratory samples. A major component of this has included making small amounts of sample go a very long way. Importantly though, I want to make sure that I’m not collecting more data just for the sake of having bigger datasets. Big data and its analysis are hot topics at the moment across disciplines. So, in addition to working to collect more useful information, I’ve also been working to integrate various datasets for improved understanding of how environmental microbial communities work. There’s still a lot of work to do here, and in many ways this achievement is also one of my greatest challenges at the moment.

Which research project are you most proud of? For what reason?

The first project that I worked on as a graduate student involved trying to find environmental microbes capable of breaking down archaeal membrane lipids, which are interesting molecules that have a variety of potential use from interpreting climate change to playing a role in drug delivery. It was a difficult project that needed to be restarted multiple times for failures both of my initial experimental design and for factors outside of my control. Eventually, I worked my way to a successful conclusion that in its circuitous process led me to multiple other projects and collaborations that continue to this day. As much as I may have wanted to quit that project as a graduate student, I’m glad that I stuck with it and still plan to pick up some of the remaining loose ends to see where they take me and my lab group.

How do your other hobbies (i.e. hiking) tie into your field of study?

I’ve had the opportunity to visit several countries and travel to many interesting field sites including caves, volcanoes, hot springs, and the sea floor (via the submersible Alvin). Hiking, rock climbing, and boats have all helped me get to these locations. It also means that when I’m out hiking with family or friends for fun, I often find myself looking for, asking questions about, or explaining interesting microbial or geological sights. Our noses are great sensors for detecting sulfide, and following your nose can help lead you to locations like the White Point beach sulfide vents. I also enjoy home fermentation projects like pickling vegetables, or brewing kombucha and beer. Those are microbial processes that can be shared with friends in a very tangible way.