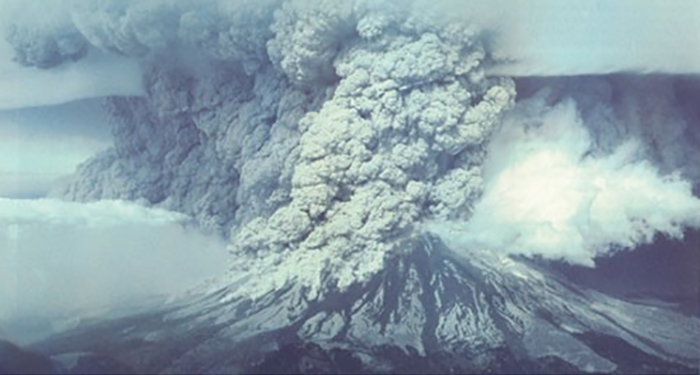 40 years ago Mount St. Helens unleashed its fury with devastating results but much has been learned from the eruption since.

Four decades have passed, yet Alan Robock and Clifford Mass are still intertwined by a rare geological occurrence: a major volcanic eruption in the United States.

The 40th anniversary of the Mount St. Helens’ eruption recently passed, sparking renewed interest in the disaster and volcanic activity in general. On May 18, 1980, near Castle Rock, Wash., it erupted nearly laterally. The ensuing avalanche destroyed 1,300 feet of the summit and 57 people were killed—from scientists to hikers. In nine hours, about 540 million tons of ash fell on more than 22,000 square miles. Winds blew millions of tons of ash eastward and caused complete darkness in Spokane, Wash. (250 miles away).

In 1981 and 1982, Robock, was a tenure-aspiring researcher at the University of Maryland. He researched the eruption and published two papers about his findings in Science. Presently, he’s a faculty member in the Rutgers Institute of Earth, Ocean, and Atmospheric Sciences (EOAS) and a Distinguished Professor in the Rutgers Department of Environmental Sciences. His second article on short-term temperature effects was co-authored by a Maryland colleague, Mass, now a professor of Atmospheric Sciences at the University of Washington. The two also collaborated on another surface temperature-related story published in the Monthly Weather Review in 1982. They visited the site the following summer and Robock returned three years ago.

Robock concluded in the Science article that the overall effect of the eruption was negligible. “We looked at how it affected climate and how it affected the weather,” he said. “The results are still correct. We haven’t changed what we think about that.”

The research Robock did with Mass involved seeing if the eruption had an effect on the weather in the Pacific Northwest. During the day of the eruption, the temperature was reduced by 15º F and it was 10-12 degrees warmer at night, explained Mass.

Robock said, “The atmosphere was full of this ash and it separated the surface from outer space. And so in Yakima it was 59º F, 15º C continuously for almost a day; It didn’t get warm in the daytime. It didn’t get cold at night because there was this huge blanket in the air until the ash blew away. But it didn’t cause any weather response. There was no change in the winds that we could detect. It was just changing the temperature of the surface.”

Mass and Robock believed their study on local temperature effects from a volcano eruption could provide knowledge to improve climate forecasting in the future.

In the years since Robock’s and Mass’ ground-breaking work, no research has been published to challenge their findings. Said Robock, “We know that for a big volcanic eruption (above 5 million tons of sulfur dioxide) to cause climate change, it has to create a cloud up in the stratosphere, in the upper atmosphere, that persists for years and by reflecting sunlight can cool the climate for years. This cloud is composed of sulfuric acid droplets, which are formed from the sulfur dioxide (SO2) gas.” This vog (smog or haze containing volcanic dust and gases) can cause respiratory problems for people.

Although Mount St. Helens’ eruption was powerful, its force was concentrated sideways instead of vertically, blowing out the side of the mountain but emitting little SO2. Geologists use the Volcanic Explosivity Index (VEI) as a measure of an eruption’s explosiveness. Mount St. Helens rated a VEI-5 (the index ranges from 0 to 8) but Robock believes the VEI is too simplistic to be used as an indicator of climate change because it measures how much energy an eruption produces, but does not account for SO2.

With the knowledge accumulated by researching Mount St. Helens, resulting in it being one of the most studied volcanoes in the world, combined with today’s improved research technology and more advanced satellites that can detect temperature and escaping gas, scientists are now more prepared to help save lives by more accurately forecasting eruptions.

It’s worth repeating the oft-told story of volcanologist David Johnston, 30, of the U.S. Geological Survey (USGS), who was monitoring Mount St. Helens from an observation post on the day it erupted, according to the USGS. His position was thought to be relatively safe. The last transmission from Johnston came over just as the eruption occurred and, according to the Scientific American, Johnston said: “Vancouver! Vancouver! This is it!”

Prior to the first significant earthquake recorded at Mount St. Helens (on March 20, 1980), there was only one seismographic station near Mount St. Helens. By the time the volcano erupted a couple months later, the University of Washington and the USGS had installed a new system of about 15 stations on the volcano and in the region, according to Stephen Malone, research professor emeritus at UW, who was responsible for seismic monitoring of Mount St. Helens and was involved in the seismic predictions of past eruptions there.

As a result of the Mount St. Helens’ eruption, geologists were more readily equipped to anticipate the June 1991 eruption of Mount Pinatubo in the Philippines, the second-largest volcanic eruption of the twentieth century. (The largest was in 1912 at Novarupta on the Alaska Peninsula. )

Working together, the USGS and the Philippine Institute of Volcanology and Seismology forecast the cataclysm saving at least 5,000 lives. The 20,000 indigenous Aeta people, who lived on the mountainside, were displaced. The ash heavily damaged the two biggest military bases in the area: Clark Air Base and Subic Bay Naval Station. Millions of tons of SO2 were shot into the stratosphere and the gas cloud moved around the world causing global temperatures to drop in 1991-1993 by 1°F. A collaborative project called iMush (Imaging Magma Under St. Helens) has studied the internal architecture of Mount St. Helens with the hope that if its inner workings can be better understood, it may help in predicting when and how severe future eruptions might be.

Meanwhile, Robock and his colleagues continue to study volcanic eruptions, hoping to be ready to anticipate the impact of the next big one.

“After a large eruption, you can predict the weather and climate for the next couple of years,” he said. “We also understand how volcanic eruptions have affected climate in the past because we have a record of past eruptions from ice cores. The sulfur goes up in the stratosphere, comes out eventually as acid rain, or acid snow, and the snow on Greenland and Antarctica gets preserved by more layers going on top of it. You take out a core and get layers of sulfur that are the actual material in the atmosphere that caused climate change. So, we have a record going back a couple of thousand years of past volcanic eruptions.”

As for the future, Mount St. Helens is part of the Cascade Range of volcanoes stretching 800 miles from northern California to southern British Columbia. The USGS warns that the “next eruption near a Cascade volcano could upset the lives of hundreds of thousands of people and disrupt many others.”