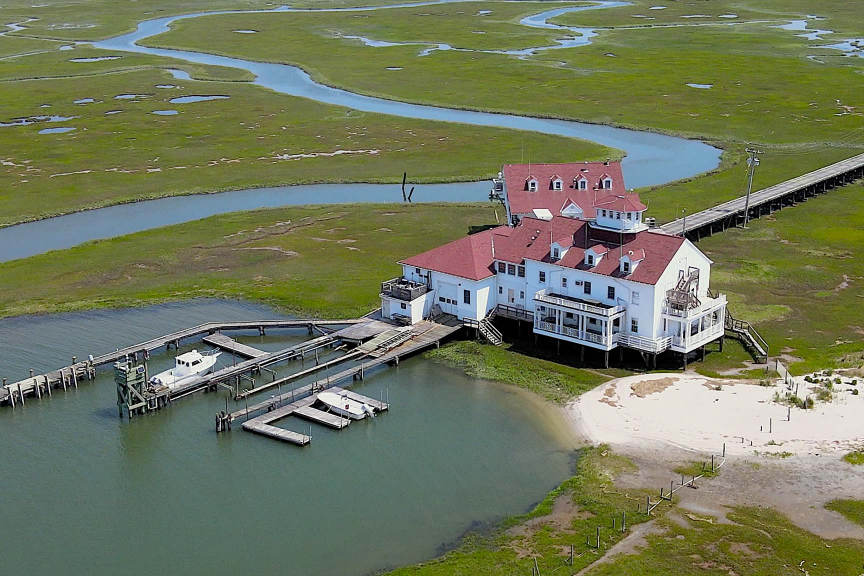 As the facility marks its 50th anniversary, here is a look back at its history and how it developed into a crucial research station in New Jersey.

Rutgers Marine Field Station stands at the heart of where climate change is happening the fastest in the world, providing a unique and crucial window into the future for researchers.

A former U.S. Coast Guard station, the building located on the Mullica Hill Estuary in Tuckerton, New Jersey, was transformed into a research facility when it became part of Rutgers in 1972.

Each daily tide brings different organisms to the estuary, making it a place of constant change. “This change around the field station provides a window into understanding the changes occurring over time along the coast,” says Oscar Schofield, Distinguished Professor and Chair of the Department of Marine and Coastal Sciences.

Every week for the last 33 years a team of researchers and Rutgers students have been collecting fish and crab larvae that they identify, measure, track and record – creating the longest time series tracking the evolution of marine life along the east coast. “What we know is there are a lot more species from South of Cape Hatteras than there used to be,” said Ken Able, professor Emeritus and former director of the field station.

“At the same time, species from the north of Cape Cod are becoming less frequent. So, there is dramatic change in the kind of fish we are seeing in this system,” Able said, and what researchers learn at the field station is being used to understand climate change and sea level rise in the rest of the world.

One of the reasons why the field station research is so important is it’s happening at a place where sea level rise is occurring faster than anywhere else in the world. The exceptional rate of sea level rise in New Jersey is a result of the effects glaciers that were here 20,000 years ago continue to have on the region – causing the South Jersey coastline to sink, Able said.

The field station is also a critical location for researching the biggest coastal storms, including Hurricane Sandy a decade ago this fall. Ocean observation tools developed at the field station are being used to predict the trajectory of future storms and how strong the surges will be. The field station provided data collected during Sandy to the National Weather Service to be used for future forecasting, Schofield said.

The field station will also play a role as New Jersey moves forward with a project to install hundreds of wind turbines up to 30 miles offshore of the field station. For the next decade, Rutgers scientists will be measuring and studying the effects on the ocean ecosystem.

“The science of trying to understand how those off-shore wind farms are going to impact our ocean ecosystem, where millions of people live will be done at the field station,” Able said.

This article was published by Rutgers Today on September 10, 2022.