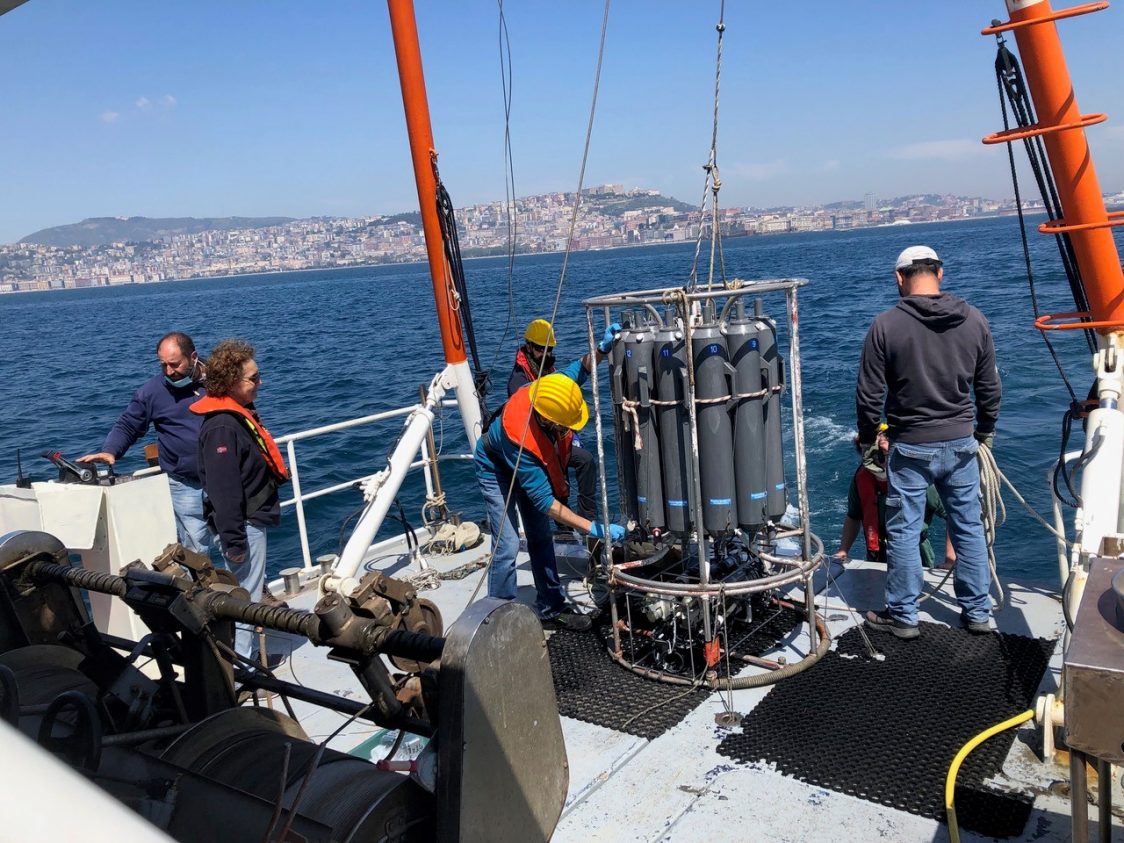 To address one of the most pressing issues impacting human civilization, pioneering work by EOAS faculty members Kay Bidle and Kimberlee Thamatrakoln is, for the first time, changing the ways scientists understand the impact marine viruses have on phytoplankton, the ocean’s role in the carbon cycle, and ultimately on Earth’s changing climate.

Arriving on the Italian coast of the Mediterranean sea in April 2022, a group of researchers led by Rutgers faculty members Kimberlee Thamatrakoln and Kay Bidle, from the Rutgers Institute of Earth, Ocean, and Atmospheric Sciences (EOAS), had traveled to Naples to conduct fieldwork for a month at the Stazione Zoologica Anton Dohrn, one of the most prestigious and oldest international marine research stations in the world.

Their aim was to study how (and the extent to which) the physics, chemistry and biology of the Gulf of Naples ecosystem serves to facilitate virus infection of phytoplankton (microscopic marine algae) and export of carbon to depth, supporting their ongoing research programs into understanding how marine viruses fundamentally change phytoplankton metabolisms to make them more likely to aggregate into large particles and sink (export carbon) into the deep ocean, impacting the carbon cycle, and ultimately, Earth’s climate system.

These studies contribute to understanding the global scientific grand challenge of how marine viruses impact the carbon cycle, something that is largely unknown and unpredictable, even though viruses are by far among the most abundant entities in the ocean.

“Everything went fantastic, and we were thrilled to have this opportunity,” Bidle said. “The enthusiastic response and the inclusive desire of the broader community (including scientists from Northern Italy who normally work in freshwater deep lake systems) was really amazing . . . and added new measurement capabilities and insights.”

The field campaign in Naples was supported by the European Union’s Horizon 2020 research and innovation programme grant agreement No 730984, ASSEMBLE Plus project, through an award to Thamatrakoln titled “Project DaVINCi –  Diatom Virus Infection of Natural Communities.”

Rutgers Global and EOAS also provided funding to supplement their fieldwork, as did two National Science Foundation (NSF) grants, one through the Biological Oceanography (Geosciences Directorate) led by Thamatrakoln and another through a Growing Convergence Research (GCR) grant (one of the NSF’s 10 Big Ideas) led by Bidle.

Their work in Italy, Bidle and Thamatrakoln said, brought together biologists, chemists, physicists, engineers, and mathematical modelers from across the U.S.—Rutgers, Stanford University, University of New Hampshire, Woods Hole Oceanographic Institution, the National Center for Atmospheric Research, and NASA—and Europe (Israel, Germany, Italy, and the Netherlands) to converge on understanding the role marine viruses play in regulating the climate. This is one of the most pressing issues of our time, and some of the most cutting-edge work in this area is taking place in Bidle’s and Thamatrakoln’s labs at Rutgers where they focus specifically on ways marine viruses impact eukaryotic phytoplankton.

Phytoplankton, according to the National Ocean Service of the National Oceanic and Atmospheric Administration (NOAA), are “similar to terrestrial plants in that they contain chlorophyll and require sunlight in order to live and grow. Most phytoplankton are microscopic, buoyant, and drift with the currents in the upper part of the ocean, where sunlight penetrates into the water.”

Phytoplankton are critical for the survival of human civilization because they are primary producers of oxygen, just as plants are on land, and they also form the basis of the marine food web, providing food for whales, fish, shrimp, snails, and other marine life, thus playing a critical role in sustaining the global fisheries that supply resources for humanity.

Largely responsible for oxygenating our planet, phytoplankton currently account for ~50 percent of its oxygen, and their role in this way is also an important part of how viruses impact carbon on a larger scale, Thamatrakoln and Bidle said.

Just how important are these tiny marine organisms to human life? Thamatrakoln said, “To give people an idea, we say every other breath of oxygen they take comes from the ocean. Scientists estimate that diatoms (a group of phytoplankton) are responsible for every fifth breath (20 percent) of oxygen humans breathe and coccolithophores (another group of phytoplankton) are responsible for every sixth or seventh breath. That gives you a general sense of what we think about.”

Major eukaryotic phytoplankton groups in the ocean are chlorophytes, dinoflagellates, haptophytes, and diatoms.  Bidle primarily studies coccolithophores (a type of haptophyte), while Thamatrakoln studies diatoms. Together, these phytoplankton are responsible for up to 80% of the export (sinking) of carbon from the atmosphere into the ocean.

Coccolithophores (a type of haptophyte) and diatoms readily sink into the deep ocean because they both synthesize their cell walls out of minerals, which causes them to be ‘ballasted,’ Bidle and Thamatrakoln said. Coccolithophores make their cell walls out of calcium carbonate, which is essentially like chalk. Calcium carbonate is also the same mineral made by corals. (To provide an example of what this mineral looks like on land, the White Cliffs of Dover in England are white because of coccolithophores). Diatoms make their cell walls out of silicon dioxide, which is essentially glass. Chalk and glass are both heavier than seawater and so, when these organisms die (which happens on a weekly basis), the propensity of mineralized, ballasted organisms is to sink via gravity, unless there is something that keeps them up in the surface ocean. When they sink, they transport carbon deep into the ocean, helping remove CO2 from the atmosphere and storing it in the ocean – a critical function helping humanity – given the amount of CO2 humans have pumped into the atmosphere, disrupting the Earth’s climate in unprecedented ways. (Interestingly, Bidle said, phytoplankton also leave deposits of their hard shells in the sediments – calcareous and siliceouos oozes – for hundreds of millions of years that geochemists and other scientists use to understand Earth’s past climate.)

What can keep dead phytoplankton in the surface ocean, preventing them from sinking into the deep ocean, taking CO2 with them in the process? Marine viruses. These viruses, Bidle and Thamatrakoln said, are by far the most abundant entities in the ocean, just as viruses are part of the earth’s microbiome, and they infect a diverse suite of marine microbes including phytoplankton. “There are 10 million viruses in every drop of seawater,” Bidle said. “In other words, there are ~10e30 viruses in the world’s oceans, meaning there are a billion more viruses in the oceans than there are stars in the universe, and yet scientists still don’t fully understand how they impact our planet’s carbon cycle.”

“These are different processes—not the same. One (shunt) causes carbon to stay in the upper ocean (and not sink) where it can increase ocean respiration (and the outgassing of CO2 into the atmosphere). The other (shuttle) leads to aggregation of particles that sink to depth and essentially sequester (remove) the carbon for hundreds to thousands of years (depending on how deep the particles sink). So they have VERY different outcomes. Our work is trying to assess if (and to what degree) viruses—in concert with ocean physics and biominerals —impact each process,” Bidle and Thamatrakoln said.

For decades marine viruses were not considered to stimulate carbon sinking and export. Instead, scientists believed that viruses in the ocean only acted as “shunts” because they caused phytoplankton cells to burst open, thus releasing all their cellular contents (the dissolved nutrients and organic material in their bodies) back into the surface of the ocean where it is eaten by other microbes. When this happens, these cells are thus no longer available to be eaten by zooplankton, which are then eaten by larger zooplankton, which are eaten by fish, and up the food chain. This is called the trophic transfer of energy – from the base of the food web up through higher trophic levels. In other words, viruses shunt that energy away from being transferred up to those higher trophic levels and put it back into microbial loop. That is why it’s called a viral shunt, Thamatrakoln explained.

The outcome from the shunt process is that it increases the respiration of the ocean (this is the same as when we breathe because we expel CO2 when we do), which essentially means the ocean is more likely to ‘burp’ (exchange) carbon dioxide back out into the atmosphere.

But what Bidle and Thamatrakoln are learning – and this is the crux of their research projects – is that when marine viruses infect coccolithophores and diatoms, they can induce these phytoplankton to change their metabolisms and become inherently stickier. This causes them to aggregate into even bigger particles, which makes them even heavier, and therefore more likely to sink and sequester carbon to depth. This means that while marine viruses can act as shunts, they can also act as shuttles, Thamatrakoln said.

Bidle has learned that viral infection induces the production of transparent exoploymers (TEP), sticky polysaccharides that are considered the glue that holds particles together. By inducing more TEP production, larger aggregates can form which might sink faster. “This process relates to the concept of ‘marine snow,’” Bidle said, “when large particles that look like snow and contain phytoplankton carbon are a major source of carbon export in the oceans. Marine snow export events routinely happen in the oceans, but the causes are not well understood. Viruses may be at play.”

While stimulation of aggregation and export by viral infection has been reported for bacteria, Bidle was the first to show it happens with prominent eukaryotic phytoplankton like coccolithophores. He led collaborative work in the North Atlantic with scientists from the U.S. and Europe that studied natural blooms from the Azores to Iceland and combined virus infection markers with carbon export measurements. As a result, Bidle was among the first to show that marine virus infection actively stimulates the mass export of phytoplankton-derived carbon. Findings from this study were published in Nature Microbiology in 2018.

Thamatrakoln has published similarly impactful papers in Nature Microbiology and Nature Geoscience which are the first of their kind to elucidate the processes that control diatom virus infection and how these viral infections are tied to geochemical cycles of iron and silicon (iron and silicon are essential to diatom production worldwide).

To conduct their cutting-edge research, Bidle and Thamatrakoln collaborate with EOAS and Department of Marine and Coastal Sciences Professor Robert Chant and Associate Professor Heidi Fuchs, as well as Associate Professor Janice MacDonnell, who is the Science Engineering and Technology Agent for the Department of 4-H Youth Development at Rutgers They also work with scientists from Stanford University, the Woods Hole Oceanographic Institute, the University of New Hampshire, NCAR (National Center for Atmospheric Research), and NASA, as well as a broader research community—including those who participated in the Italy project.

While working in the Gulf of Naples in April and May, Bidle and Thamatrakoln focused on diatoms because the species of diatoms that bloom in the Gulf of Naples are ones that Thamatrakoln has cultures and viruses for in her lab and has been studying for the past decade.  This has allowed her to develop diagnostic tools to diagnose infection of diatoms in natural populations at sea.

Reflecting upon their work in Italy, Thamatrakoln said, “Italy provided a natural laboratory for us to bring concepts and ideas together in a natural system. It also allowed us to work with experts at the Stazione Zoologica studying mesoscale physics and diatom cell biology and merge all of it together to understand how marine viruses impact the carbon cycle on the planet.”