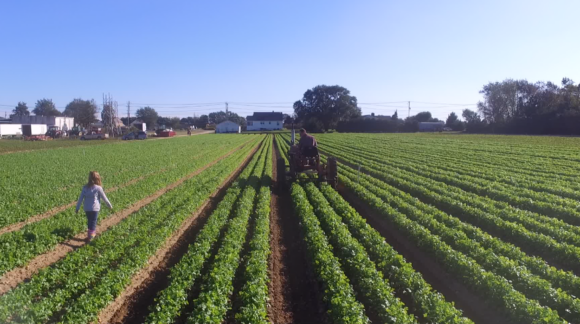 The Rutgers School of Environmental and Biological Sciences Departments of Marine and Coastal Sciences and Plant Biology, along with the Rutgers Center for Agricultural Food Ecosystems (RUCAFE)—a part of the New Jersey Institute of Food, Nutrition and Health—are launching a unique “Science Storytelling as Community Engagement” initiative. The intent is to increase understanding and dialogue between Rutgers scientists and the broader community. Distinguished professor Oscar Schofield, chair of Marine and Coastal Sciences noted, “it is imperative for scientists to find innovative ways to engage the public in science learning. This is our fundamental responsibility as a land-grant institution.”

The science storytelling initiative is being launched with a two-minute trailer for the 30-minute science-in-action film that will be released Spring 2022. Fields of Devotion features Rutgers plant biologists and three New Jersey farmers who benefit from Rutgers-developed disease-resistant food crops.

The film begins with New Jersey farmers revealing the challenges they face from the pressures of a changing climate. It then spotlights the detailed work of Rutgers plant geneticists isolating genes for disease resistance in commercial basil, a high-profit crop that small family farmers depend on.

John Vaninni of Vannini Farms in Vineland, NJ is featured in the film, confiding, “People don’t realize how hard it is to be a farmer. We can lose our crops within a matter of days from new diseases that come from our rapidly changing climate.”

Organic farmer Jess Neiderer of Chickadee Creek Farms, is also featured in the film. Neiderer noted, “What organic farmers need most are disease-resistant crops that have strong immune systems.”

Distinguished professor Jim Simon, whose research is featured in the film, says that his team’s model for developing disease-resistant basil can be used to establish resiliency in other food crops. “What’s most important is that commercial farmers and university researchers continue to work closely together,” said Simon.

SEBS science outreach specialist Dena Seidel captured more than a hundred hours of science-in-action footage as she documented the scientists’ and the farmers’ processes over a year and a half of filming.

Fields of Devotion will be used as a community engagement tool for convening a public event that brings commercial growers and plant scientists together to learn about each other’s work and support the development of meaningful partnerships.

This initiative includes research on STEM learning for all those who are engaged in the making and viewing of these science-in-action stories.

This article was originally published by the SEBS/NJAES Newsroom on December 7, 2021.