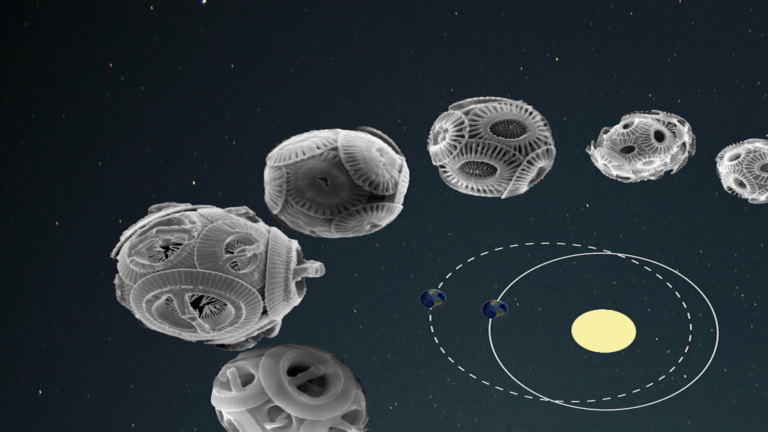 Their findings, published this week in the journal Nature, reveal new evidence that evolutionary cycles in a marine phytoplankton group are related to changes in tropical seasonality, shedding light on the link between biological evolution and climate change.

Coccolithophores are abundant single-celled organisms that surround themselves with microscopic plates made of calcium carbonate, called coccoliths. Due to their photosynthetic activity, mineral production and widespread abundance throughout the world’s oceans, coccolithophores play an important role in the carbon cycle.

Scientists have long thought that climate changes’ effects on plants, animals and other organisms occur in cycles, which are reversed when each cycle is completed, thus erasing any small evolutionary changes during each cycle. In contrast, evolutionary changes, as known from the fossil record, are non-cyclic trends that occur over millions of years.

But the researchers’ new study shows that evolutionary cycles in coccolithophores are attributed to changes in tropical seasonality related to shifts in the Earth’s orbit that occur about every 400,000 years. The study may also offer a new understanding of the approximately 400,000 year-long variations in records of the oceans’ carbon cycle.

“The production of calcium carbonate by these prolific coccolithophore species likely impacted the chemistry of seawater and the oceanic carbon cycle, which in turn could have significant consequences for Earth’s climate through the ocean influence on the concentration of atmospheric carbon dioxide,” said the study’s co-author Yair Rosenthal, a Distinguished Professor in the Department of Marine and Coastal Sciences.

The researchers used AI techniques to study the shape of nearly nine million coccoliths from more than 8,000 samples, each representing a point in geological time or space, tracing coccolithophore evolution over 2.8 million years. The samples came from tropical sediment cores from the ocean floor recovered during scientific drilling expeditions.

Automated optical microscopes captured the images, from which species are recognized and their size and weight measured. These size and weight records revealed the presence of cycles lasting 100,000 years and 400,000 years, which correspond to variations in the shape of the rotation of the Earth around the sun, known as the eccentricity of the Earth’s orbit. Unexpectedly, these cycles are not the same length as those followed by global climate cycles and glaciations over the last 2.8 million years.

“The eccentricity cycles have multiple effects on the earth,” said Luc Beaufort, a lead author of the study. “One of the little-known effects is the periodic appearance of seasons at the equator. At the present time, when Earth follows an almost circular orbit, the equator experiences a very weak change in seasons, but when the orbit is eccentric and shaped more like an ellipse than a circle, seasonal changes in tropical regions become stronger.”

This effect on tropical seasonality is different than the cause of seasonality at higher latitudes, which is driven primarily by the inclination of the earth’s axis of rotation.

“We modelled the effects of changing seasonality driven by eccentricity in the tropical ocean, demonstrating that the effects on marine ecosystems are significant and could explain the adaptation of coccolithophores to new niches created by these cyclical seasonal conditions,” said Clara Bolton, a co-author of the study.

The study included researchers from Rutgers-New Brunswick and the Centre for Research and Teaching in Environmental Geoscience (CEREGE) in France.

This article was written by Emily Everson Layden and was originally published in Rutgers Today on December 1, 2021.