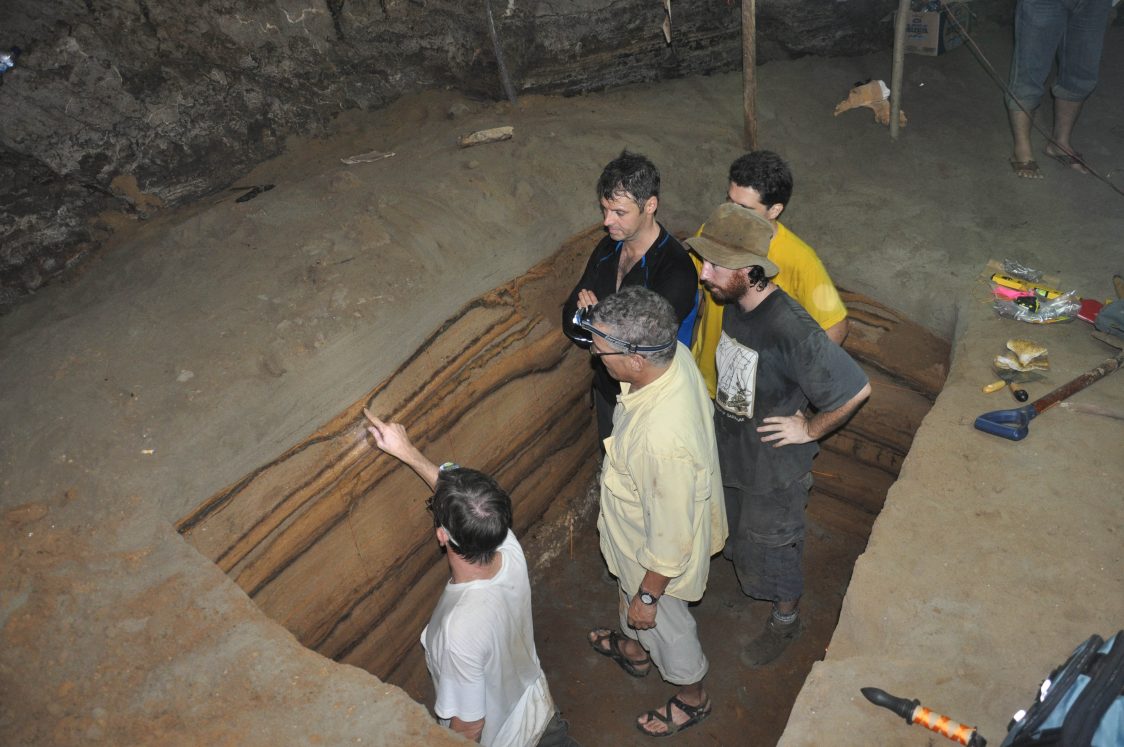 Record tells us we don’t know much about predicting earthquakes that cause tsunamis. 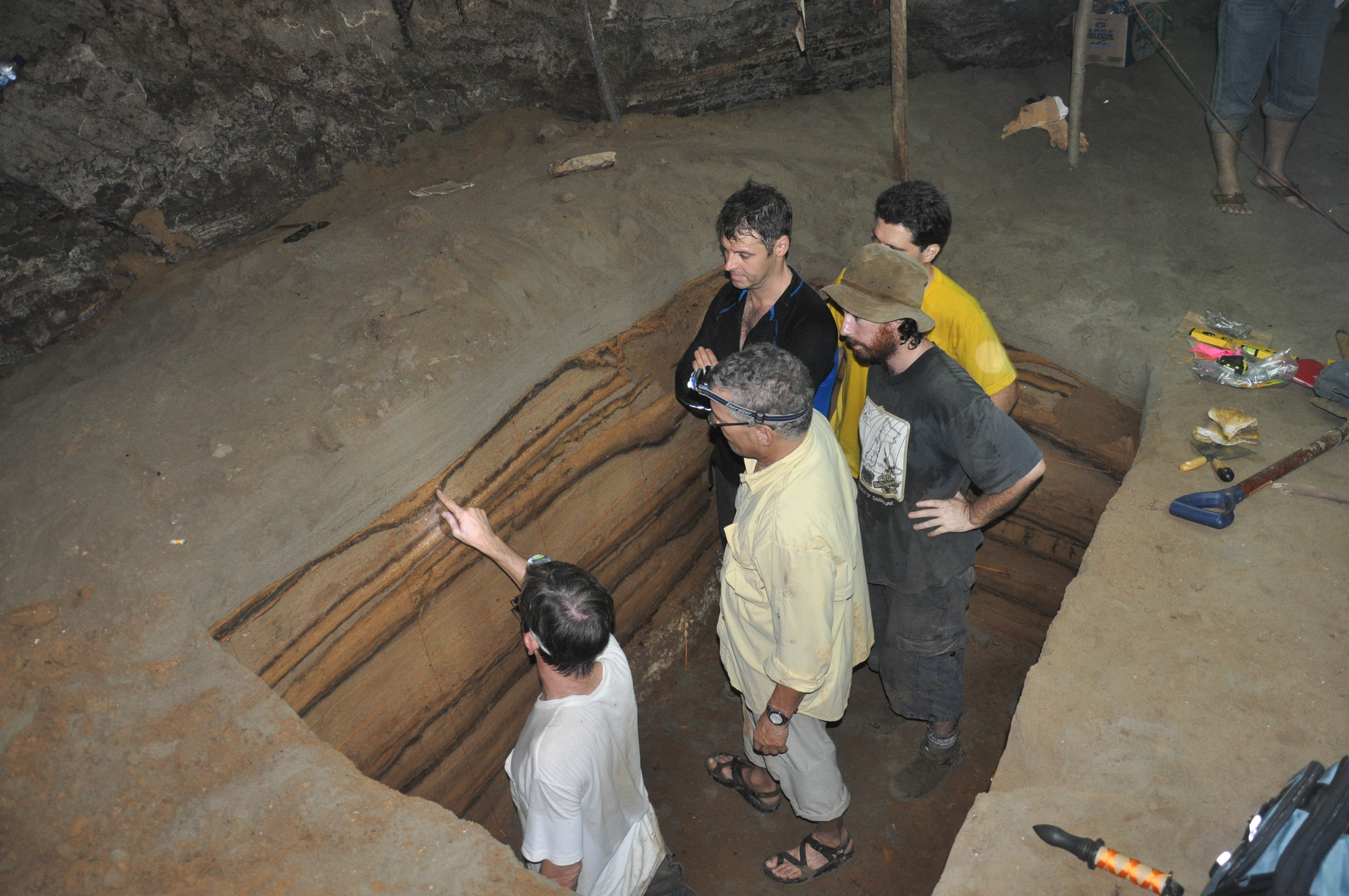 Photo: Earth Observatory of Singapore
The bearded man is Nanyang Technological University archaeologist Patrick Daly, whose excavations in this sea cave led Kerry Sieh (pointing) and Charles Rubin of the Earth Observatory of Singapore and Rutgers’ Benjamin Horton to look for tsunami records there. EOS graduate student Jedrzej Majewski, in the yellow shirt, stands behind Daly.

An international team of scientists digging in a sea cave in Indonesia has discovered the world’s most pristine record of tsunamis, a 5,000-year-old sedimentary snapshot that reveals for the first time how little is known about when earthquakes trigger massive waves.

“The devastating 2004 Indian Ocean tsunami caught millions of coastal residents and the scientific community off-guard,” says co-author Benjamin Horton, a professor in the Department of Marine and Coastal Sciences at Rutgers University-New Brunswick.“Our geological record from a cave illustrates that we still cannot predict when the next earthquake will happen.”

“Tsunamis are not evenly spaced through time,” says Charles Rubin, the study’s lead author and a professor at the Earth Observatory of Singapore, part of Nanyang Technological University. “Our findings present a worrying picture of highly erratic tsunami recurrence. There can be long periods between tsunamis, but you can also get major tsunamis that are separated by just a few decades.”

The discovery, reported in the current issue of Nature Communications, logs a number of firsts: the first record of ancient tsunami activity found in a sea cave; the first record for such a long time period in the Indian Ocean; and the most pristine record of tsunamis anywhere in the world. 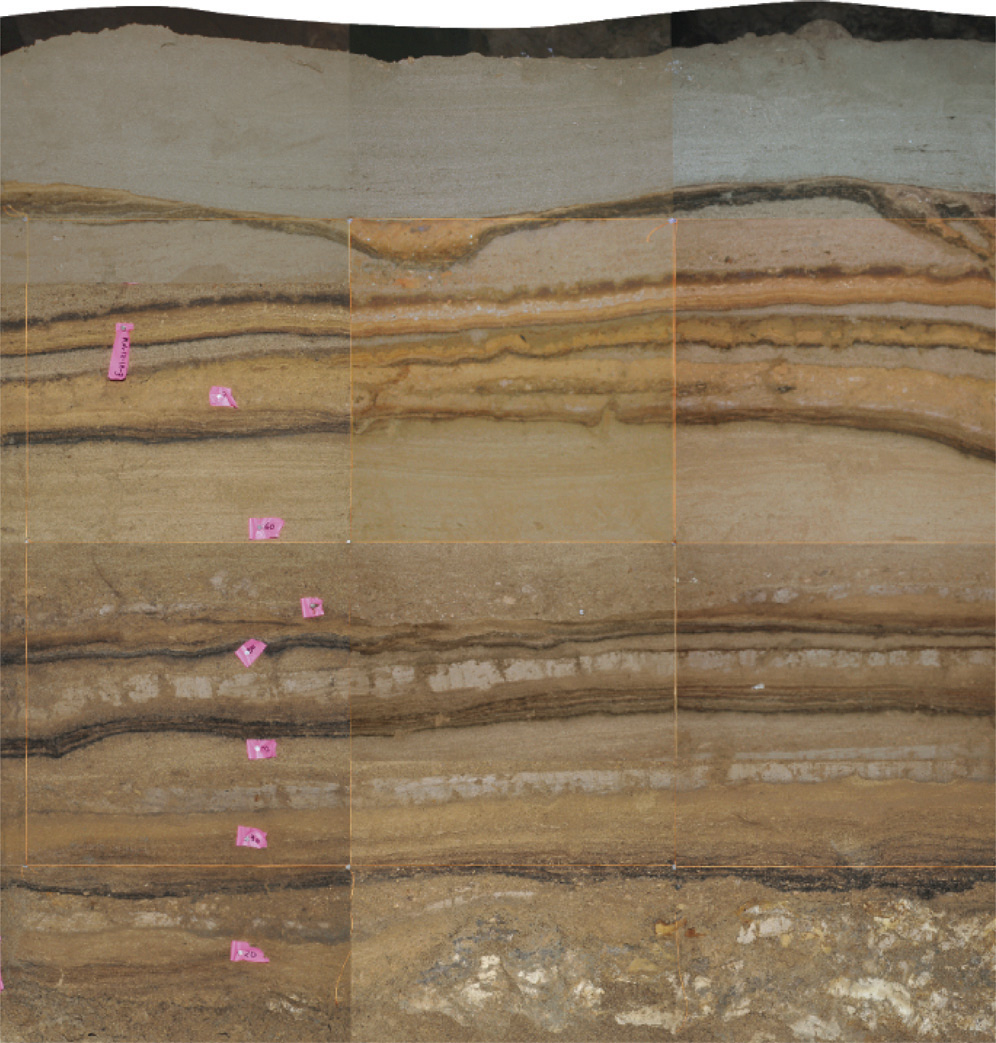 The discovery was made in a sea cave on the west coast of Sumatra in Indonesia, just south of the city of Banda Aceh, which was devastated by the tsunami of December 2004. The stratigraphic record reveals successive layers of sand, bat droppings and other debris laid down by tsunamis between 7,900 and 2,900 years ago. The stratigraphy since 2,900 years ago was washed away by the 2004 tsunami.

The record indicates that 11 tsunamis were generated during that period by earthquakes along the Sunda Megathrust, the 3,300-mile-long fault running from Myanmar to Sumatra in the Indian Ocean. The researchers found there were two tsunami-free millennia during the 5,000 years, and one century in which four tsunamis struck the coast. In general, the scientists report, smaller tsunamis occur relatively close together, followed by long dormant periods, followed by great quakes and tsunamis, such as the one that struck in 2004.

Rubin, Horton and their colleagues were studying the seismic history of the Sunda Megathrust, which was responsible for the 2004 earthquake that triggered the disastrous tsunami. They were looking for places to take core samples that would give them a good stratigraphy. This involves looking for what Horton calls “depositional places” – coastal plains, coastal lake bottoms, any place to plunge a hollow metal cylinder six or seven meters down and produce a readable sample. But for various reasons, there was no site along the southwest coast of Sumatra that would do the job. But Patrick Daly, an archaeologist at EOS who had been working on a dig in the coastal cave, told Rubin and Horton about it and suggested it might be the place they were looking for. 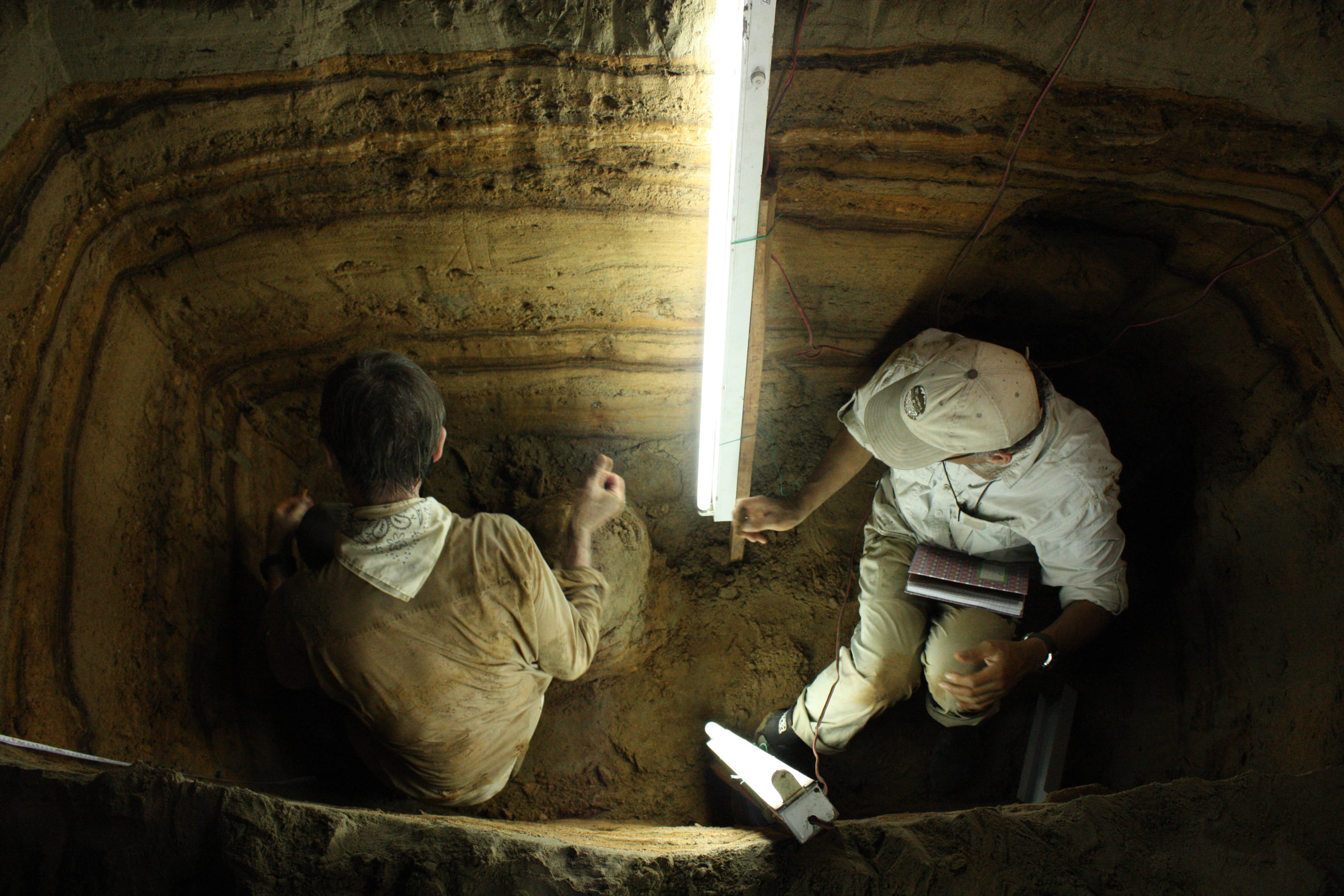 Looking for tsunami records in a sea cave was not something that would have occurred to Horton, and he says Daly’s professional generosity – archaeologists are careful about who gets near their digs – and his own and Rubin’s openness to insights from other disciplines made the research possible. Horton says this paper may be the most important in his career for another reason.

“A lot of (the research) I’ve done is incremental,” he says. “I have a hypothesis, and I do deductive science to test the hypothesis. But this is really original, and original stuff doesn’t happen all that often.”

This Article Was Originally Published by Rutgers Today on July 19th, 2017.