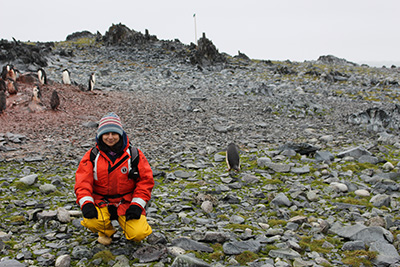 DEENR Post Doc Mansha Seth-Pasricha seeks clues to the origins of life in Antarctica, where the environment is similar to that of Earth millions of years ago.

By Lessley Delcid and Walker Perry

In 2015, Mansha Seth-Pasricha, apostdoctoral associate in the Department of Ecology, Evolution, and Natural Resources (DEENR) at Rutgers University-New Brunswick, traveled to Antarctica. “The water was unlike anything I have ever seen, a breathtaking deep-blue color,” she said. “It was like heaven on Earth.” But Pasricha wasn’t there to sightsee. She was there with the Rutgers LTER (Long Term Ecological Research) group to learn how microbes are sampled in the open ocean and how to study microbial systems in an extreme environment.

Pasricha wants to know how the processes of RNA viruses and single-celled organisms called Archaea are related to the evolution of similar processes in eukaryotic life, and how they may have played a role in eukaryotic life as it was first formed. In other words, she seeks to discover the origins of life as we now know it.

“Antarctica is an environment that is reminiscent of the conditions on Earth millions of years ago,” Pasricha said. “The region is hard to sample, but it may have clues to the origin of eukaryotes.”

Pasricha explained that Archaeaare still understudied.“Archaea are the lesser explored domain of life, mostly because they are not harmful to human health, but they have proved fundamental in the understanding of core processes in eukaryotes,” Pasricha explained. “RNA viruses, on the other hand, are studied due to their pathogenicity to humans, but like Archaea, are intriguing, because in the evolution of life on the Earth, RNA is a molecule that may predate the first cell.”

Studying these complex questions about evolution have helped Pasricha find her niche in the scientific community. Her research has enabled her to help bridge the problems posed by spatial ecology of field-based work to more testable questions which can be made into lab-based experiments. These contributions are not where her achievements in her field end, but rather are only part of her larger professional career.

Pasricha co-taught for one year and was a guest lecturer for two years in three courses, Evolution, Disease, and Medicine; Experimental Evolution; and Fundamentals of Evolution. Of the three, she said, the Evolution, Disease, and Medicine course is her favorite to teach, as it is designed to be accessible for students from a wide variety of educational backgrounds. “Students are often astounded by the impact of climate change on diseases, and even mental health,” after taking this class, she said.

Pasricha’s long list of ever-growing accomplishments stems from her upbringing, she said, which was centered around science and medicine. She explained that when she was a child, she always looked up to her two aunts as role models — as they were not only medical doctors — but they were also head members of the Medical Council of India.

As a child Pasricha was puzzled by existential questions. “I was fascinated by the question of why we live on Earth as opposed to another planet. Why can’t we live on Mars?” She also had a persistent curiosity about evolution. “Why is it that with 16,000 genes, a fruit fly is a smaller organism, but with about 20,000 functional genes, humans become such a large and complex organism. So many functions in our cells work exactly like they do in the cell of a fruit fly.” She also pondered how and why mice and other mammals were used in labs to test how humans might react to various medicines.

Pasricha’s research may have direct consequences for understanding human health, because she is ultimately aiming to contribute to what is known about the very origins of life itself. “I hope that the questions I pose on testing the limits of a virus will expand the way most scientists think about microbial interactions,” Pasricha explains. She hopes other scientists will use her findings for human health initiatives, such as phage therapy.

Wherever her studies take her, Pasricha says that science is simply astounding to her. “It’s beautiful how physical space, interactions, motion, and chemical nutrients, govern cellular processes. Such realizations in experimental work become my most fascinating moments of science.”