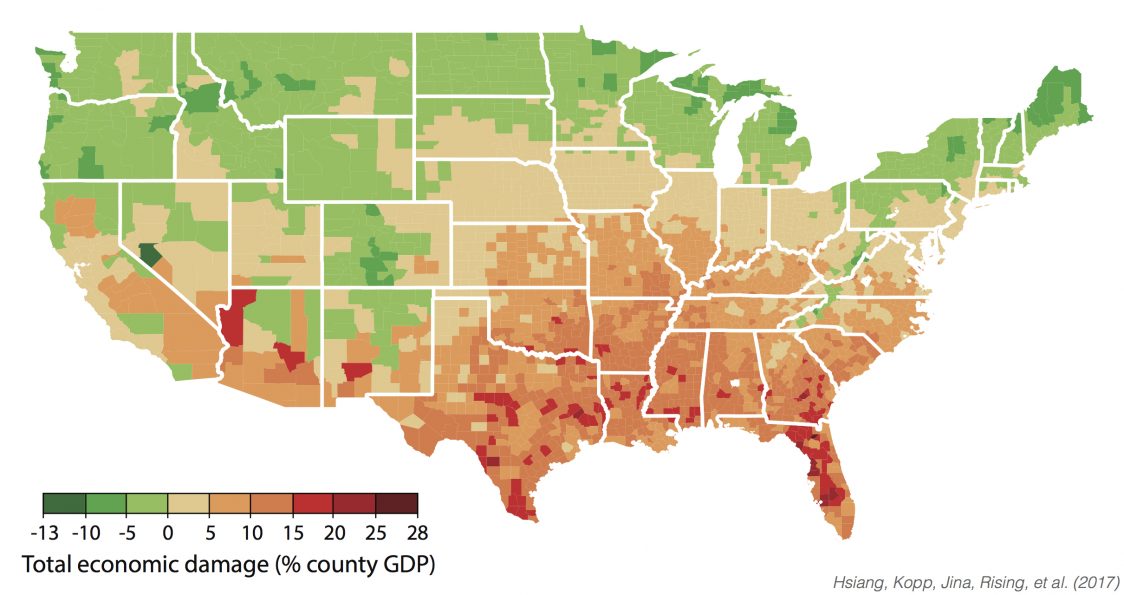 Unmitigated climate change will make the United States poorer and more unequal, according to a new study published today in the journal Science. The poorest third of counties could sustain economic damages costing as much as 20 percent of their income if warming proceeds unabated.
States in the South and lower Midwest, which tend to be poor and hot already, will lose the most, with economic opportunity traveling northward and westward. Colder and richer counties along the northern border and in the Rockies could benefit the most as health, agriculture and energy costs are projected to improve.

“Unmitigated climate change will be very expensive for huge regions of the United States,” said Hsiang, Chancellor’s Associate Professor of Public Policy at UC Berkeley. “If we continue on the current path, our analysis indicates it may result in the largest transfer of wealth from the poor to the rich in the country’s history.”

The pioneering study may settle the debate over whether climate change will help or hurt the U.S. economy, being the first to use state-of-the-art statistical methods and 116 climate projections developed by scientists around the world to price the impacts of climate change the way the insurance industry or an investor would, comparing risks and rewards. The team of economists and climate scientists computed the real-world costs and benefits: how agriculture, crime, health, energy demand, labor and coastal communities will be affected by higher temperatures, changing rainfall, rising seas and intensifying hurricanes.

“In the absence of major efforts to reduce emissions and strengthen resilience, the Gulf Coast will take a massive hit,” said Kopp, a professor in Rutgers’ Department of Earth and Planetary Sciences and director of the Institute of Earth, Ocean, and Atmospheric Sciences. “Its exposure to sea-level rise – made worse by potentially stronger hurricanes – poses a major risk to its communities. Increasingly extreme heat will drive up violent crime, slow down workers, amp up air conditioning costs and threaten people’s lives.” 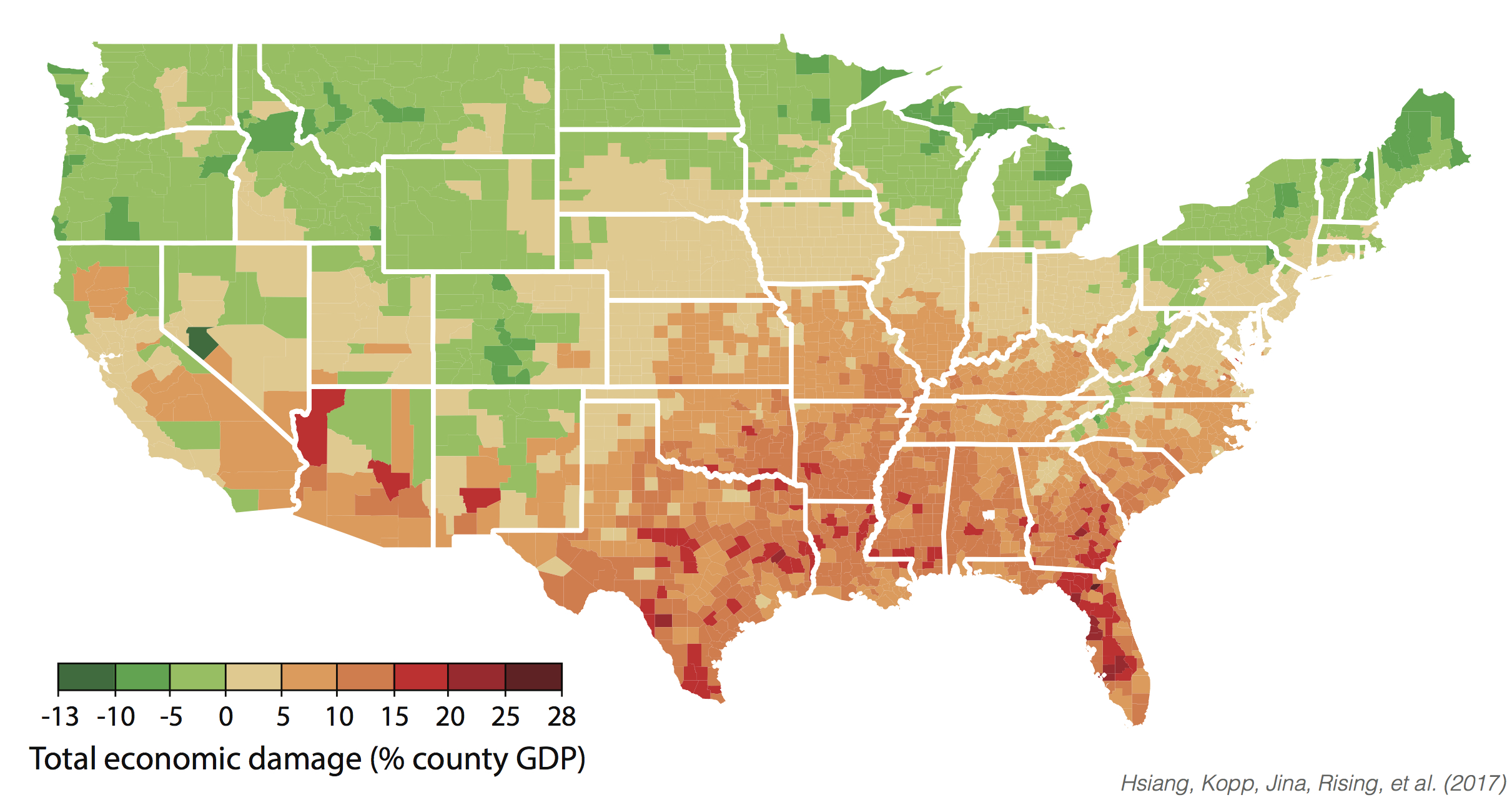 If emissions growth is not slowed, then the resulting 6 to 10 degrees Fahrenheit (3 to 5 degrees Celsius) of warming above 19th century levels projected for the last two decades of this century will have costs on par with the Great Recession – except they will not go away afterwards and damages for poor regions will be many times larger.

“The ‘hidden costs’ of carbon dioxide emissions are no longer hidden, since now we can see them clearly in the data,” said Jina, a postdoctoral scholar in the Department of Economics at the University of Chicago. “The emissions coming out of our cars and power plants are reshaping the American economy. Here in the Midwest, we may see agricultural losses similar to the Dustbowl of the 1930s.”

The study is the first of its kind to price warming using data and evidence accumulated by the research community over decades. From this data, the team estimates that for each 1 degree Fahrenheit (0.55 degrees Celsius) increase in global temperatures, the U.S. economy loses about 0.7 percent of Gross Domestic Product, with each degree of warming costing more than the last. This metric can help the country manage climate change as it does other systematic economic risks – for example, the way the Federal Reserve uses interest rates to manage the risk of recession. 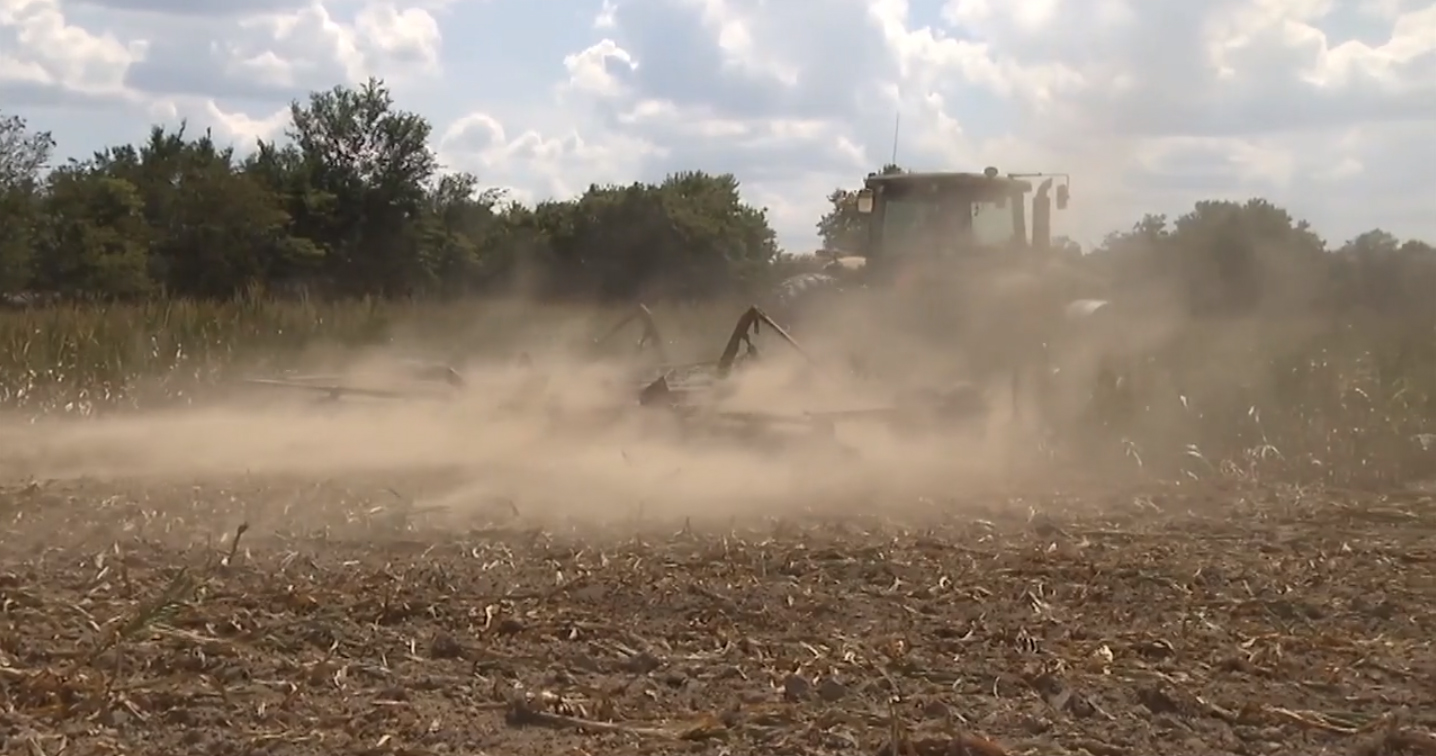 Photo: Climate.gov and U.S. Climate Resilience Toolkit
A farmer in the Midwest struggles with drought conditions that could worsen periodically with climate change.

“We could not have done this study without the ongoing revolution in big data and computing,” said Rising, a Ciriacy-Wantrup Postdoctoral Fellow at UC Berkeley, describing the 29,000 simulations of the national economy run for the project. “For the first time in history, we can use these tools to peer ahead into the future. We are making decisions today about the kinds of lives we and our children want to lead. Had the computing revolution come 20 years later, we wouldn’t be able to see the economic hole we’re digging for ourselves.”

Hsiang, Kopp, Jina, Rising and several of their coauthors are members of the Climate Impact Lab, a consortium that is building upon the study’s trailblazing approach to compute climate risks around the world.

This article was originally published by Rutgers Today on June 29th, 2017.