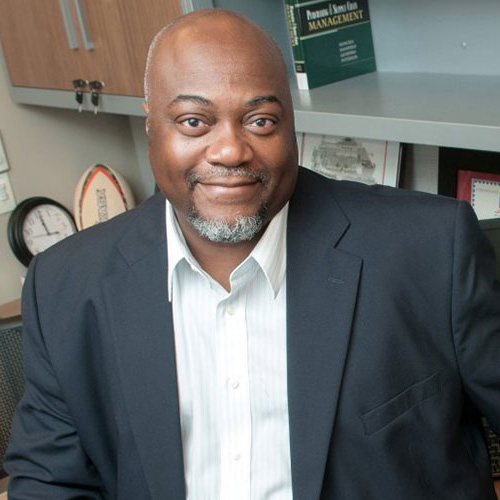 Kevin Lyons is at the epicenter of one of the University’s most ambitious endeavors yet: the quest to develop a comprehensive climate action plan for Rutgers campuses.

Lyons, an associate professor at the Rutgers Business School in the supply chain management department, and a faculty member in the Rutgers Institute of Earth, Ocean, and Atmospheric Sciences, is a co-chairman of the President’s Task Force on Carbon Neutrality and Climate Resilience, which released a pre-planning report in January and is staging initial town halls in Newark, Camden, Piscataway, and New Brunswick to give students, faculty, staff, and alumni in those communities a voice in shaping the plan.

At the same time Lyons, an associate director of the Rutgers Energy Institute, has managed to maintain his teaching load and his affiliations with centers, institutes, and labs, including leading the Mandela Washington Fellowship in which young professionals from sub-Saharan Africa attend a six-week business leadership institute at Rutgers.

“Before the Climate Task Force, I thought I was over the edge,” he said in jest. “But now I’m beyond it.”

President Robert Barchi appointed him and the other co-chairman, Robert Kopp, the director of EOAS, to manage the climate program.

“Kevin’s decades of experience at Rutgers, and his almost unique pathway bridging the operational and academic sides of the university, make him an ideal partner in leading this effort,” said Kopp, a professor in the of Earth and Planetary Sciences.

Lyons’s immediate task is helping to manage the 12-member task force—which will be expanding with the addition of students— and seven working groups affiliated with it. “It’s a lot of give and take,” he said. “We have a good leader. Bob has a vision; he helps guide us toward the goal. It also helps that we are using a universally accepted Climate Action Plan—something that the U.N., countries, and even businesses are following. It’s the university’s attempt to fulfill that lofty goal.”

Each task force member is of one of the working groups. In Lyons’s case, that is the supply chain waste management group, which comprises representatives from the facilities and procurement areas along with academics and students. His working group co-chair is Nimish Patel,  chief procurement officer.  The other working groups energy and buildings; transportation; food system; land use and offsets; climate preparedness; and climate-positive economic development.

In addition, Lyons and Kopp must make sure their work integrates with that of the other six groups. Lyons, however, is confident about his skills as a broker of compromises. “I see both sides,” he said. “I’m a decision analysis kind of guy. I can see how I can bring folks together.”

Lyons also believes that sharing knowledge with fellow members of the Big Ten—including Michigan and Penn State—universities that have already put climate action plans into effect, will be helpful.

His own awakening to environmental issues came in high school and crystalized afterward during a six-year stint in the Air Force. He was stationed at a missile base in Cheyenne, Wyo., where he worked in procurement.

“I was able to do some of the things I am doing now in a time when people were not thinking about any of this,” he said. Early on, he asked himself if all the packaging that accompanied  shipments was necessary. “I was able to make the connection that we were paying for the actual thing and then paying for the other stuff that came with it,” he said. “So that has been my mission from the beginning: connecting of waste and purchasing.”

Lyons came to New Jersey in 1983 on a special duty assignment with the Rutgers ROTC, then worked at Saint Peter’s Hospital for a few years before returning to Rutgers in 1988 as a buyer in the procurementand contracting division. In 2005, he became chief procurement officer, managing annual procurements of more than $700 million. Lyons had already begun lecturing at the Rutgers-Newark Business School and the School of Environmental and Biological Sciences. One course he taught that represented his academic interests was Green Purchasing and Ecological Systems.

He is a trailblazer of sorts in his field, so much so that, when he was looking for a place in the U.S. to earn his Ph.D., he could not find the right academic combination—the convergence of supply chain and waste management. Lyons wound up going to England to the University of Sunderland to pursue his studies.

At Rutgers, it’s developing purchasing decisions that integrate sustainability that gives him the most pride. “We achieved policies that are still being practiced today,” he said. One result of his efforts to manage waste was a recycling rate at the universityof plus 60 percent (the amount of waste that is targeted for recycling instead of landfills).

The next milestone for Lyons and the Task Force? The preparation and May release of its interim report.