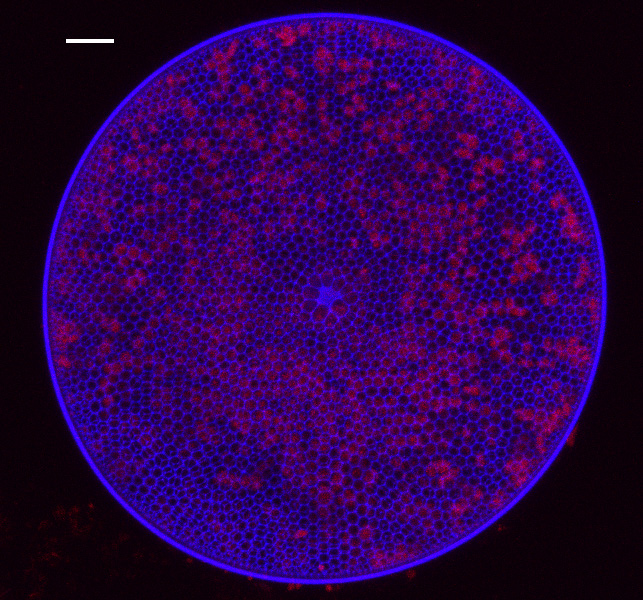 Scientists have confirmed that viruses can kill marine algae called diatoms and that diatom die-offs near the ocean surface may provide nutrients and organic matter for recycling by other algae, according to a Rutgers-led study.

The study in the journal Nature Microbiology also revealed that environmental conditions can accelerate diatom mortality from viral infection, which is important for understanding how diatoms influence carbon cycling and respond to changes in the oceans, including warming waters from climate change. Diatoms, which are single-celled algae that generate about 20 percent of the Earth’s oxygen, help store carbon dioxide, a key greenhouse gas, in the oceans.

“To our knowledge, this is the first time different stages of infection have been diagnosed in natural diatom populations and suggests that diatom populations may be terminated by viruses,” said senior author Kim Thamatrakoln, associate research professor in the Department of Marine and Coastal Sciences at Rutgers University–New Brunswick. “Our study showed that when silicon levels in the ocean are low, diatoms can be more rapidly infected and killed by viruses and are then more likely to release their nutrients and other matter in the surface ocean instead of sinking.”

Since the Victorian era, diatoms have been known as the “glass houses of the sea” because of their beautiful cell walls made of silicon dioxide, or glass. Silicon is essential for diatom growth, but since glass is heavy, diatoms can sink to the deep ocean when they die. That makes all of their nutrients, carbon and organic matter unavailable for surface recycling by other algae that need sunlight only available in the upper ocean.

Diatoms are infected by the smallest viruses on Earth and were once believed to be immune because of their glass-based armor. Such viruses have long escaped detection by traditional methods and very little was known about how they affect diatoms. So, the scientists studied what drives and ends diatom blooms in the California Current, a Pacific Ocean current that flows southward along the coast. The scientists found distinct areas ranging from uninfected diatom populations to highly infected populations.

They also found that some populations had undergone a die-off and the level of silicon was the strongest predictor of viral infection. Diatoms take up dissolved silicon from the environment and turn it into glass for their cell walls. But most of the surface waters where diatoms live have low silicon levels, so these findings suggest viral infection may play an important role in controlling diatom populations globally.

This article was written by Todd Bates and was originally posted in Rutgers Today on July 17, 2019.