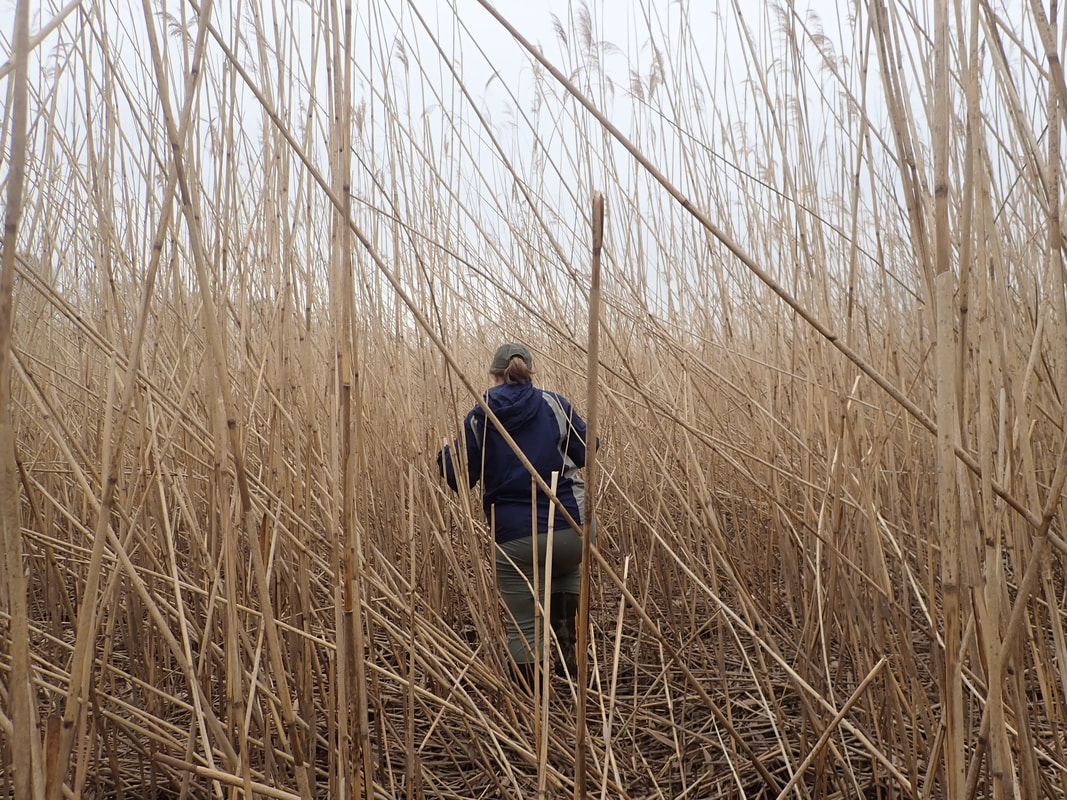 Laura Reynolds, an EOAS postdoctoral fellow, and team, are conducting pioneering research on carbon and sediment levels of the tidal marshes in the Raritan River and Bay, to better understand and predict how sea level rise will impact these waterways.

The tidal Raritan River, once dubbed the “Queen of Rivers” in a poem published in the London Review in 1806, is the only river located entirely within New Jersey. The fate of the once-pristine river, bay, basin, and tributaries is inextricably linked with New Jersey’s economy, health, and even recreation. Owing to the many and various industries located on its banks since colonial times through today, many parts of the river have become severely polluted. In addition, impacts from climate change are also affecting these waterways.

In an effort to better understand these issues, and work toward implementing solutions, many Rutgers faculty, staff, and post-doctoral researchers, including scientists at the Rutgers Institute of Earth, Ocean, and Atmospheric Sciences (EOAS), are committed to conducting research on the Raritan.

Much of the funding supporting this vital research has been provided by Rutgers University’s Rutgers Raritan River Consortium (R3C). In 2019, R3C awarded ten mini-grants to recipients who conducted their research between May 2019 and December 31, 2019. The awardees have now reported the results of their research to R3C.

One of the projects R3C supported is “Determining accretion rates and carbon content of tidal marsh sediments along the Raritan River and Bay: implications for tidal marsh resilience to future sea level rise.”

The research on this project was conducted by EOAS Post-Doctoral Fellow Laura Reynolds, who collaborated with other Rutgers researchers, including Julie Blum (Department of Ecology, Evolution and Natural Resources, School of Environmental and Biological Sciences), Kristen Joyse (Deptartment Earth and Planetary Sciences, School of Arts and Sciences), Richard Lathrop (Department of Ecology, Evolution and Natural Resources, DEENR, SEBS), and Margaret Christie (Department of Marine and Coastal Sciences, SEBS).

Reynolds said their work researching blue carbon in the Raritan has broad implications for New Jersey, and for the global environment, because, “As sea level rise and human development continues to impact coastal regions, it is important to quantify the ecosystem services tidal marshes provide so we can appropriately value these environments. It’s also important to know how these environments might change in response to future changes so we can prepare for and/or mitigate future changes.”

Reynolds earned her bachelor’s degree from Dartmouth College and her Ph.D. in Geological Sciences from the University of California Santa Barbara in March 2018. After she graduated, she said she “drove cross country and then worked for the National Park Service in Washington D.C. for a few months. Then I moved to New Jersey in September 2018 to start my EOAS postdoc. I am now part of the Ecology, Evolution, and Natural Resources Department (working with  Julie Lockwood and Richard Lathrop), and also the Department of Marine and Coastal Sciences (working with EOAS Director Robert Kopp). Lisa Auermuller is also one of my EOAS supervisors.”

Asked what inspired her passion for her research, she said, “I grew up in New Hampshire near the Merrimack River. I’ve always loved wetlands of all types—bogs, swamps, marshes. And I think my parents would tell you I’ve also always been prone to playing in mud, so studying marshes has seemed like a natural fit. I also think wetlands in general are really important and still somewhat underappreciated environments—they’re often not as obviously scenic as a mountain range or a forest, or a beach, but they have their own kind of beauty. I’d love to see others in the wider world value them more.”

One of the ways New Jersey residents might gain a better understanding of the issues facing the river, Reynolds said,would be to “Go and check out Cheesequake and/or Lemon Creek—both have nice hiking trails and views of the marsh. Also, the Raritan marshes are literally covered in plastic trash. So not dumping trash in the river would be another good thing—I don’t know of any studies that look at the impact of trash on accretion processes in marshes, but I can’t imagine it is good for them.”

The reason Reynolds and her research team chose to study accretion rates and carbon content of tidal marsh sediments, Reynolds said, is because “We wanted to get a better idea of how much carbon is stored in the tidal marshes of the Raritan River and Bay. Many previous studies have quantified how much organic carbon is stored in tidal marshes around the world, but few quantify the deep (> 1 m depth) storage in marshes. In addition, phragmites-dominated marshes are underrepresented in compilations of tidal marsh carbon data (i.e., Holmquist et al., 2018), so we wanted to get a sense for whether this invasive and spreading vegetation impacts the amount of carbon stored in tidal marsh sediments. Finally, no studies to date have focused on quantifying blue carbon in tidal marshes along the Raritan River and Bay, so it’s a somewhat unexplored region in terms of blue carbon studies.”

To the best of her knowledge, Reynolds said, this is the first study to attempt to quantify the variability in historical (50-100 years) accretion rates and carbon storage in tidal marshes along the Raritan River and Bay. “Previous studies in Raritan tidal marshes have focused on reconstructing environmental change at individual sites; this study is the first to attempt to quantify how accretion rates and carbon content varies among multiple sites.”

Another aspect of their research that sets it apart from other studies, Reynolds said, is “we are measuring carbon content through the full depth of the marshes (up to 7 m, in Lemon Creek)—most other carbon sequestration studies in tidal marshes focus on much shallower depths—typically the top 1 m of sediments.”

Why is it so critical that researchers understand blue carbon, and what is blue carbon? “Blue carbon is the carbon stored in coastal and marine environments,” Reynolds said. “Tidal marsh plants use carbon dioxide in the air for photosynthesis—over time, plants die and the carbon they contain is added to the marsh soils, along with carbon from small bits of organic matter washed in from elsewhere by tides/river flow. Some of the organic matter decays and its carbon is released, but much of it stays buried within the sediments (sand, silt, mud, organic matter).”

Explaining what sediment starvation is, and what studying it can reveal to scientists, Reynolds said, “Tidal marshes are known to be able to ‘keep pace’ with sea level rise—i.e., build vertically as sea level rises. However, this process depends on many complex factors, including the marsh vegetation’s ability to trap sediments on the marsh surface. Tidal marsh sediments are typically derived from river flow, tidal flow, and sediment resuspension from the marsh surface/edges. Human activity may impact the type and amount of sediment that reaches the marsh surface—dams may trap river sediments upstream and coastal infrastructure may change how much sediment is available from the coastline. Marshes are said to be ‘starved’ of sediment when they do not have enough inorganic and/or organic matter to help them build vertically at pace with sea level rise.”

Their key findings, some of which surprised them, Reynolds said, are they “found that the average organic carbon content varied little between sites. There may be some variation related to vegetation type, but we don’t have enough data yet to say that for certain. It doesn’t look like the phragmites-dominated marshes have significantly different carbon stores relative to those dominated by other vegetation. The average value of carbon density (g C per cm^3) we calculated from our preliminary findings among all the sites is consistent with that from a recent national inventory (Holmquist et al., 2018). However, as noted in Holmquist et al., 2018, many studies that quantify carbon stored in tidal marshes only measure the carbon stored in the top 1 m of sediments. Our work further highlights (we’re not the first to show this) that there is quite a bit of carbon stored in many tidal marshes even beneath the organic rich first few meters. Therefore, blue carbon budgets that are based only on this shallow data likely underestimate the true amount of carbon stored in these systems.”

Regarding next steps in their research, Reynolds said, “We are currently waiting for accretion information—dates on the cores will help us determine how fast sediments accumulated through time. We are also continuing to analyze the data to try to determine what is driving the variability in carbon storage that we are seeing.”