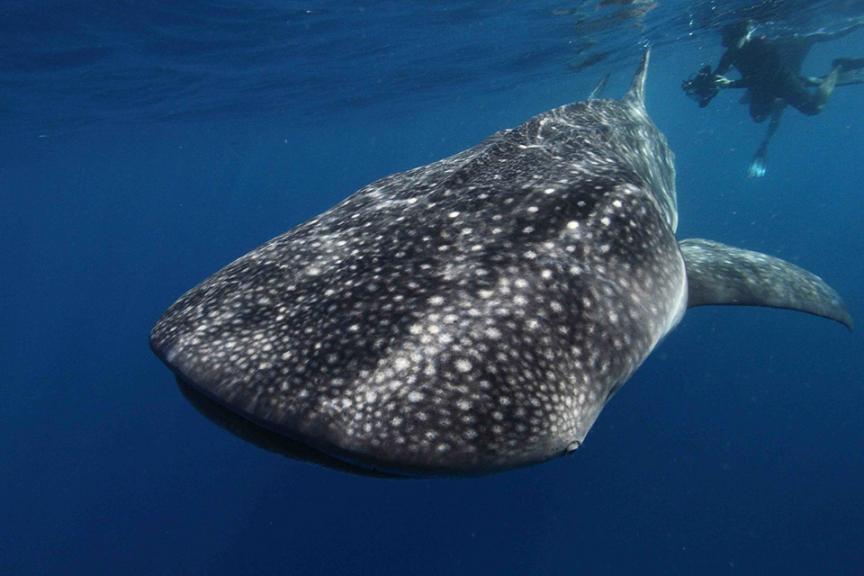 Nuclear bomb tests during the Cold War in the 1950s and 1960s have helped scientists accurately estimate the age of whale sharks, the biggest fish in the seas, according to a Rutgers-led study.

The study in the journal Frontiers in Marine Science used a measure of lingering radioactivity (radiocarbon dating) from nuclear explosions to estimate shark ages, and it could help ensure the survival of this endangered species.

“Accurate estimates of longevity, growth and mortality will better inform management and conservation efforts for whale sharks,” said lead author Joyce Ong, a postdoctoral associate in the Department of Marine and Coastal Sciences in the School of Environmental and Biological Sciences at Rutgers University–New Brunswick. “The extended longevity, slow growth rates, late maturity and global connectivity of this species indicate high susceptibility to death caused by human impacts, such as ship strikes. Hence, this knowledge can help conservation managers adjust their strategies to be more effective.”

Whale sharks (Rhincodon typus) can weigh up to 40 tons. The largest one reported was 65.6 feet long, but they rarely exceed about 39 feet, according to the National Oceanic and Atmospheric Administration. Whale sharks have broad, flat heads with short snouts, and their backs feature a white, yellow and grey checkerboard pattern.

It’s been difficult to estimate whale sharks’ ages at death since they, like all sharks and rays, lack otoliths (bony structures) that scientists use to assess the ages of other fish. Resembling tree rings, whale shark vertebrae have distinct bands that increase as the animal ages. Some studies suggest that a new ring forms annually; others concluded that one forms every six months.

Led by Ong, a research team from several institutions examined the radioactive legacy of the Cold War’s nuclear arms race.

In the 1950s and 1960s, the United States, Soviet Union, Great Britain, France and China tested nuclear weapons in the open air, including several kilometers above Earth (1 kilometer is 0.62 miles). That temporarily doubled the level of carbon-14, a form of carbon and naturally occurring radioactive element, in the atmosphere. Archaeologists and historians frequently use carbon-14 to date ancient bones and artifacts. Nuclear explosions release carbon-14 and Cold War fallout saturated the air and oceans. The carbon-14 gradually moved through food webs, resulting in an elevated carbon-14 level that lingers.

The scientists tested the carbon-14 levels in the growth rings of the whale shark stored in Taiwan and one in Pakistan, accurately dating them.

Next steps include seeking the vertebrae of stranded sharks and studying more large, old whale sharks, Ong said. That will allow scientists to refine growth models, resulting in more accurate estimates of growth and natural mortality that will lead to more effective conservation strategies.

Scientists at the University of Iceland; Australian Institute of Marine Science; King Fahd University of Petroleum and Minerals in Saudi Arabia; and the Pakistan node of the U.N. Food and Agricultural Organization contributed to the study.

This article was written by Todd Bates and was originally published in Rutgers Today on April 4, 2020.