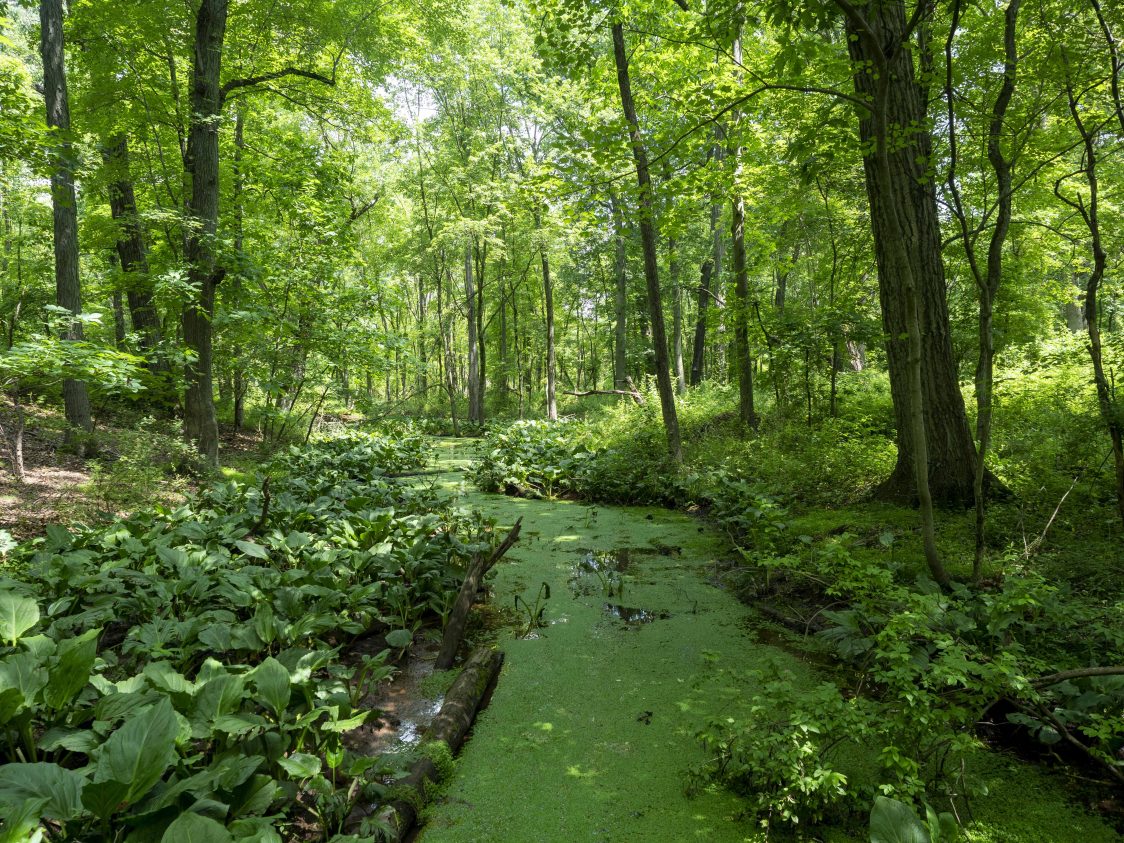 Only 15 minutes from campus, you’ll find the oldest laboratory of its kind at Rutgers and perhaps the country, yet many students and the community are probably unaware of its existence.

Off Amwell Road in Somerset County stands the Hutcheson Memorial Forest, listed on the National Park Registry of Natural Landmarks, whose 500 acres of forest and surrounding fields are tailor-made for ecological research. The most distinctive feature of the forest is Mettler’s Woods, 65 acres of rare old-growth forest. Amazingly, in this mixed oak forest there has never been a tree felled or soil used for agriculture of any kind. There are only a few remaining areas of old-growth forest of this age remaining in the United States.

The director of the forest for the past year and a half has been the ebullient Myla Aronson, an assistant professor in the Department of Ecology, Evolution and Natural Resources, who said, “One of the unique things about the system is not just that it’s an old-growth forest, but that we have multiple long-term studies that have looked at the flora and the birds over the last 60 to 70 years.” She highlighted the “Buell-Small Succession Study” that has sampled fields turning into forest since 1958, and the study of the old-growth forests and Mettler’s Woods that was established in 1949 by Murray Buell, the first director of the forest. The significance of both studies, explained Aronson, is that “they allow us to understand how ecological systems change over time in response to climate change and suburban and invasive species pressures.”

Another ongoing survey (1960s-present) involves the mark and recapture of song birds with “mist” netting, which does not does injure the birds. The nets are used during the May-July breeding season to capture and place a band around their leg. This study monitors changes in health and enables ecologists to gauge bird populations.

There are many reasons why researchers are attracted to HMF, including its notoriety as a research center since its founding in 1955. The forest has been the site of intense study; for example, more than 250 papers and treatises have been published from research studies centered there. In addition, the forest manages to subsist in the most densely populated state in the country.

Originally owned by a Dutch family from 1701, Rutgers came to possess the forest in perpetuity through many acts of philanthropy from across the country pursued by the Citizens Committee for the Preservation of Mettler’s Woods. The decisive donation came from the similarly concerned United Brotherhood of Carpenters and Joiners, A.F.L. Mettler’s Woods and 71 acres of adjacent farmland were presented to the Rutgers’ Department of Ecology Evolution and National Resources by the carpenter’s union, which purchased the tract for $75,000 from the longtime owners, who had wanted to sell it for development. The compact between the union and university specified that the land must remain virgin and it was envisioned then as a “living laboratory.” Over time additional acreage was added to serve as a buffer between the forest and encroaching outside development.

On Oct. 16, 1955, The New York Times summed up the historical import of the transaction: “The forest is said to be a remnant of the original hardwood forest that covered the Eastern seaboard when the white man took possession. At least a third of it—including its animal life—goes back in an unbroken line to the last Ice Age.”

Over the years, HMF has faced many conservation challenges: pressures from the deer population, which endangered the native flora in the understory, and the encroachment of invasive species introduced through horticulture, people’s yards and gardens, which then entered the forest and overwhelmed the native species. This is commonplace and affects all natural areas in the region and beyond. To curb the deer threat, a 12-foot tall fence, encircling about 65 acres, now stretches for 2.5 miles along the entire old-growth woods. The fence was erected in 2015 following a generous donation by an alumnus, dentist Howie Archard, who, as an undergraduate student, studied with Murray Buell himself. Since HMF is considered a conservation area, the fence was designed to keep the deer out but allow fox, bobcats, coyotes, and turkey to enter.

The other conservation challenge for Aronson and HMF land manager Joseph Paulin, a Ph.D. candidate in the Ecology & Evolution program, is the gradual loss of Mettler’s Woods rich canopy. Aronson’s priority is the restoration and the continued regeneration of the old-growth forest. She said, “A lot of our oldest trees, the trees that are 300, 250 years’ old are dying because of old age. And because of the heavy deer pressure, we don’t have enough smaller trees to take their place. So, one of the things that I’d like to focus on as director is restoring the forest—planting native trees and other native plant species and utilizing the forest for more research and student education.”

Monthly tours are usually available for the public but they have been suspended due to the coronavirus outbreak. However, when normalcy returns, Aronson wants to involve the community more, both in Franklin Township and the RU student community.

“This is a really important place for preservation and understanding nature,” said Aronson, understatedly.