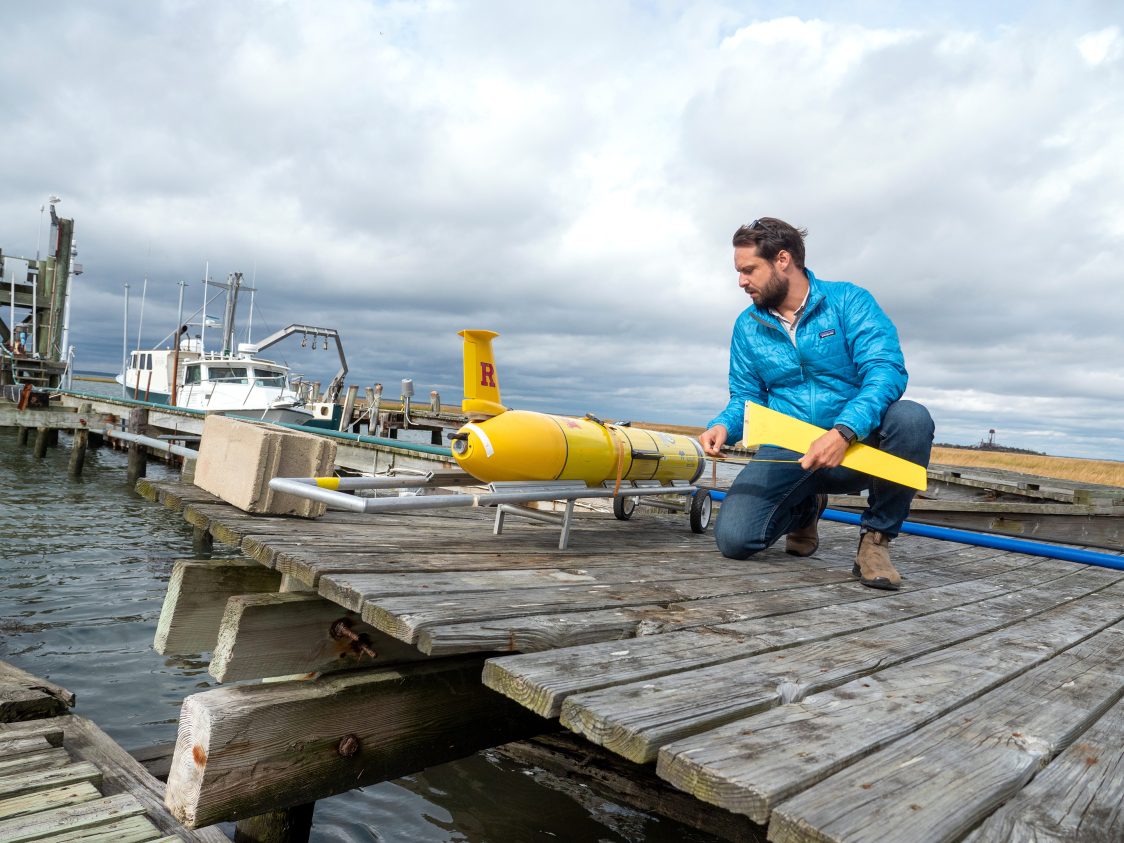 The water mass known as the “Mid-Atlantic cold pool”– an area of cool water off the coast that traditionally makes hurricanes less severe the further north they travel – mysteriously vanished from the New Jersey coast, eliminating one of state’s natural defenses against hurricanes. What followed was the second costliest tropical cyclone to impact the United States, which resulted in numerous lives lost because of Sandy’s high winds and catastrophic storm surges. The storm caused about $30 billion dollars’ worth of damage throughout New Jersey.

Four days before Sandy made landfall, Travis Miles, then a doctoral degree student and now assistant professor of marine and coastal sciences, traveled 13 miles off the coast in rough seas to launch Glider RU23 – an ocean robot that can acquire data in the waves at the center of a hurricane and studies tropical storm intensification and ocean acidification, water temperature, depth, salinity and more – near the Rutgers University Marine Field Station.

It was one of the first planned missions of its kind. Over the past decade, Rutgers robot research has helped change the field of oceanography and the way scientists understand extreme weather.

“As we watched Superstorm Sandy in 2012, it became more apparent it wasn’t weakening, at least not due to the ocean, the way Hurricane Irene did,” said Miles, a former graduate student of RUCOOL cofounder Scott Glenn, who has been an integral part in developing a new generation of oceanographers. “All of the cold water we expected, similar to the year before, to weaken the storm wasn’t there. So, we knew we had to track it.”

On October 25, 2012, ahead of the storm, all 115 pounds of Glider RU23 plunged into the Atlantic Ocean and for 12 days it swam through 30-foot waves during Sandy, capturing water current and temperature data from the surface to the sea floor.

Once an hour over the 12 days before and after Sandy – about 288 times – the bright yellow glider sent data back via satellite phone. The 6-foot-long robot took a few measurements per second and returned thousands of data points.

Before the Sandy launch, the gliders, invented in the late 1990s, were primarily used for research projects. More risky adventures took a backseat. The relatively new technology was expensive and scientists were cautious.

“The first line of defense is accurate forecasts.”
–Travis Miles

Since then Miles, Glenn and other members of RUCOOL have pioneered research on the ocean’s role in determining the intensity of hurricanes by deploying these underwater robot gliders during storms to collect samples scientists wouldn’t be able to obtain otherwise. Storm predictors and meteorologists use the data in real time to improve intensity forecasts of storms and find out how strong they will be.

Miles said that launching the underwater robots – just ahead of the eye of a storm – to be able to see the ocean change had not been done in detail before.

The gliders track water temperature inside a hurricane – a key driver of storm intensity. Hurricanes are like heat engines, which pull heat out of the ocean, power up and then make landfall or weaken if they go over cold water, said Miles, a Wilmington, North Carolina native. If there is cold water – as with Hurricane Irene in 2011 – the energy decreases.

But the ocean is difficult to sample and is one of the largest sources of uncertainty for a hurricane forecast, said Miles, who released Glider RU23 with the help of Greg Seroka, a former Rutgers doctoral candidate and now a scientist at the National Oceanic and Atmospheric Administration (NOAA). “If you don’t know how much fuel you have, it’s hard to know whether a storm’s going to power up or weaken before it makes landfall.”

Once they had gathered enough data, the crew traveled approximately 40 miles south by boat out of a Belmar-based marina, getting one of the first looks at demolished properties down the coastline.

According to the NOAA National Centers for Environmental Information, hurricanes have become more severe over the past 40 years.

In New Jersey, 85 percent of natural disaster damage is from hurricanes. “While New Jersey does not get the strongest storms, there is so much infrastructure and so many people near the coast, creating massive damage,” said Miles.

Hurricanes, typhoons and tropical cyclones are among Earth’s most destructive natural events. The United States’ hurricane losses since 1980 are approaching $1 trillion dollars, more than all other weather and climate disasters combined. Hurricane-related deaths since 1980 exceed 6,700 people, more than any other weather or climate disaster category.

The unknown dynamics of what happened to the “cold pool” as Sandy approached, the widespread lack of ocean data in landfalling hurricanes and the absence of a communication pathway to government operational forecasting centers prompted a decade of Rutgers innovation, research and education.

Since Miles submerged Glider RU23, researchers at RUCOOL have created a fleet of “sentinel” gliders – essentially a glider network – to cruise continuously off the Atlantic coast, helping provide data for models used to forecast hurricanes. Rutgers has overseen 500 deployments of gliders from Svalbard, Norway to McMurdo Station, New Zealand and from New Jersey to Sri Lanka.

Data from the 2012 mission prompted partnerships with NOAA, the National Weather Service, labs at the U.S. Navy and 40 other institutions to ensure information collected is incorporated in operational forecast models, transitioning the research to operations so that forecasters have the best ocean temperatures and heat data they possibly can to make predictions.

“There is a dearth of upper ocean observations available to the NOAA models, and the hurricane gliders deployed by Rutgers and partner institutions have been essential towards filling those gaps,” said Kathleen Bailey, an oceanographer and scientist at NOAA, who manages the U.S. Integrated Ocean System glider program. “The gliders provide valuable upper ocean temperature and salinity data that are directly used by NOAA to improve hurricane intensity forecasts. The partnerships have allowed us to efficiently maximize limited resources in order to contribute important ocean observations to hurricane intensity forecasts that inform and help protect coastal communities.”

The 2022 hurricane season, which began in August, marks the fifth year the U.S. Hurricane Glider fleet – headed by Rutgers and other institutions – has operated to improve national hurricane forecasts by providing government models thousands of profiles of ocean temperature and salinity in real time. Data that was not available during Sandy.

“The first line of defense is accurate forecasts,” said Miles, who was awarded the 2018 Ocean News and Technology Young Professional Award from the Marine Technology Society for his work in understanding how the ocean and atmosphere interact during storms. “It’s an honor to be part of this endeavor and help our future generations to be able to respond to these storms. It’s something we can do today in a very tangible way to protect our coastal communities.”